Recent acquisitions from the Mendham sale 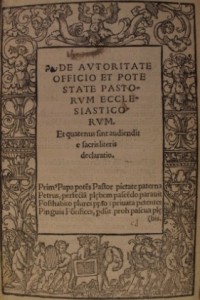 In June, despite much protest from historians, academics and librarians, a significant portion of the Mendham Collection in Canterbury – which had been publicly accessible for almost 150 years – was sold.  Assembled by Joseph Mendham (1769‐1856), a Church of England priest and controversialist, it consisted of around 5000 volumes concerning evangelical Protestantism, Catholicism and anti-Catholicism.  It was particularly strong in early printed books, containing 77 incunabula and over 750 sixteenth-century books, all of which had been on loan from the Law Society to the University of Kent and Canterbury Cathedral Library since 1984.  Although many lots will have gone to private collectors, some have been purchased by institutional libraries, and Cambridge University Library successfully acquired two volumes, containing six imprints. 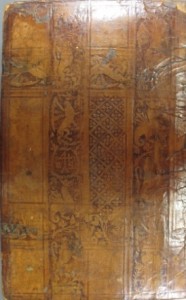 Lower board of the Spierinck binding

The sale comprised 142 lots of manuscripts, incunabula and other early printed books, of which 36 did not sell (though some were purchased by institutions after the sale).  The total amount raised was £1,180,875.  The most expensive lot was an interleaved copy of Thomas Martin’s 1554 treatise on the marriage of priests, with extensive notes in the hand of John Ponet (Bishop of Winchester 1551-1553); as such, it forms what is essentially the manuscript of his reply, published in 1555.  This item was bought by an American institutional library, but in October a temporary export bar was put in place by the Government, in the hope that it can be kept in this country.  Lot 104, a Sarum Missal (Rouen: 1510) to which unique printed prayers for the phantom pregnancy of Queen Mary were added in the 1550s, sold for £86,500.

The two lots acquired by Cambridge University Library are a volume containing five rare works printed in the 1520s and bound in Cambridge shortly after by Nicholas Spierinck, and a unique Dutch incunable (Andreas de Escobar, Modus confitendi, Zwolle 1480-1481), which failed to sell at the auction, but was acquired afterwards. 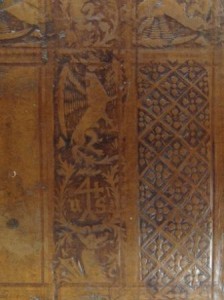 Detail of Spierinck binding, with the ‘NS’ motto

The Cambridge binding, now with the classmark 5000.c.63,  contains five works, three by the Dutch reformer Wessel Gansfort (1419-1489), one by the Mechelen-born Johannes Gochius (d. 1475) and one anonymous work on the authority of the church.  None carries the name of their printer or the date on which they were printed, but (based on type and ornaments) all are believed to have been produced in Zwolle by Simon Corver, who worked there from 1519 until 1523.  In this short period more than 40 works came from his press and it is largely thanks to him that Gansfort is remembered today.  In 1523 Corver moved to Hamburg, where he printed sixteen works, of which eleven were authored by Luther.  All five of the imprints in our volume are rare, though the University Library holds copies of three already.  Both the anonymous work on church authority, De autoritate officio et potestate pastorum ecclesiasticorum [c. 1522], and Gochius’ In divine gratie [c. 1521] are known in the UK in only two copies (British Library and Cambridge University Library).  The UK holdings of the three works by Gansfort are as follows: 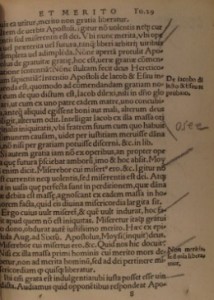 The binding itself, although it has been given a new spine relatively recently, preserves the boards, decorated with roll tools showing dragons and lions, and the letters NS, for Nicholas Spierinck.  It was once clasped, but the fittings have perished; tabs of vellum, possibly sixteenth-century, protrude from the fore-edge, marking the beginning of each work.  There are sixteenth-century annotations in the margins, and notes by Mendham himself throughout; although many nineteenth-century collectors acquired early printed books, not many used and annotated them so extensively.  Given that all the works were printed in Zwolle, it seems likely that they came to Cambridge together rather than being assembled by a scholar at the University from different sources.  The three works in this volume already held by the University Library are also bound together (with one other work), in H*.11.13(D), which suggests that the works appeared individually in booksellers’ shops and were bought by and bound together for individual customers.  Furthermore, H*.11.13(D) was owned by the controversialist William Charke, who matriculated at Peterhouse in 1560, so (although it’s now in an early seventeenth-century binding) that collection may have been assembled in Cambridge at the same time as the Mendham volume.  Corver’s books probably came to England via a large centre such as Amsterdam, with which he had links through his family.  The binder Nicholas Spierinck started out as a bookseller in Antwerp, and is known to have imported books from the continent to sell in Cambridge in the early years of the sixteenth century.  Such a volume is a wonderful addition to the Library’s holdings, representing the growth of religious reformation in the University. 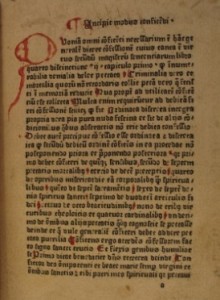 The University Library’s other acquisition was, by coincidence, also printed at Zwolle.  It is the only known copy of one of two Zwolle editions of Andreas de Escobar’s Modus confitendi [Peter van Os, about 1480-81], a manual on confession, now at the classmark Inc.5.E.7.1[4647].  Almost 90 editions are recorded in the period up to 1500, with over twenty ascribed to the 1480s alone (many, like this edition, are undated).  As an ephemeral work which would have been heavily used, many of the editions are recorded in only one or two copies, and we must assume that more have disappeared altogether.  At only eight leaves it is a very short volume, but its significance lies both in its ultimate rarity and the fact that it complements the Library’s holdings of Dutch incunabula.  Thanks to Henry Bradshaw, University Librarian from 1867 until his death in 1886 – and to his successor, Francis Jenkinson – the Library has (with the British Library) one of the pre-eminent collections of Dutch incunabula in the United Kingdom.  Bradshaw purchased at many sales of Dutch books, travelling to the continent on more than one occasion to do so, and during Jenkinson’s librarianship the collection of incunabula doubled in size.  Of the Library’s 4650 incunabula over 725 were printed in the Low Countries.

These two acquisitions, which have now been fully catalogued, are once again available to researchers in the University Library’s Rare Books Department.