Posted on 23 December 2013 by Special Collections 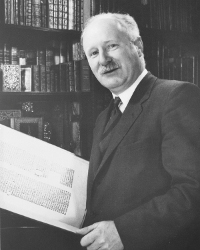 In June the Special Collections blog advertised an exhibition in the Library to coincide with a conference – held at King’s College – in honour of Tim Munby, Librarian of King’s from 1947 until his early death in 1974, who was born a century ago this year.  The exhibition drew extensively on Tim’s own library of sale catalogues and bibliographical works, a large portion of which (1800 volumes) was purchased by the University Library after his death.  But with the actual centenary of his birth approaching (he was born on Christmas Day 1913), we thought this a good time to consider the many donations he made to the Library during his lifetime.  These include four incunabula (in addition to a further incunable owned by Munby which was bought by the Library), recently catalogued online as part of the Library’s five-year incunabula cataloguing project, and many rare eighteenth- and nineteenth-century books.

Born on Christmas Day 1913, A. N. L. ‘Tim’ Munby studied at King’s College (1932-1935) before working in the antiquarian book trade with Quaritch and Sotheby’s.  Having spent most of the War as a prisoner in Germany, Munby returned to Cambridge as Librarian at King’s in 1947, where he remained for the next 27 years.  The earliest donations of books appear to have been made in that first year, including at least one incunable. 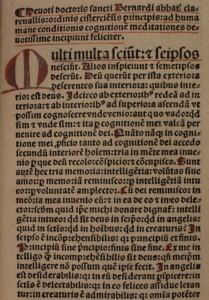 The first two incunables from Munby came to the library in 1947.  Bound together in a small volume, the two books include devotional treatises traditionally, but spuriously, attributed to Bernardus Claravallensis. They were both printed in Paris by Pierre Levet about 1495. The first (Inc.6.D.1.16[4264], item 1) is a collection of religious treatises including the Meditationes de interiori homine, also attributed to Hugo de Sancto Victore, De gubernatione rei familiaris by Bernardus Silvestris, De ordine vitae attributed to Johannes Homo Dei and De conscientia ascribed to an anonymous Cistercian of the 12th century (ISTC ib00407500;  Oates 2988). The second (Inc.6.D.1.16[4264], item 2)  is the Modus bene vivendi in christianam religionem by Thomas de Frigido Monte (c. 1150-1225), a French Cistercian monk (ISTC ib00415000;  Oates 2989).   It is the only copy in the UK of Levet’s edition, which was the fifth among the nine editions of the text published in Italy and France between 1490 and 1500. Red initials of simple design were supplied in the late fifteenth or early sixteenth century, together with underlining of captions and highlighting of printed capitals and paragraph marks in red.  The volume still retains an early sixteenth-century parchment cover over wooden boards.  Unfortunately, there are no signs of ownership or contemporary annotations and therefore no hint about the identity and location of the original owner.  Nevertheless, the round spine and coloured endbands laced through the boards may suggest an English or Irish provenance alongside the printed label pasted on the upper pastedown by the Dublin booksellers Grant and Bolton sometime in the nineteenth century. The volume belonged to John Trower (1844?-1898) of Exeter College Oxford before entering Munby’s collection (it carries his simple book label). 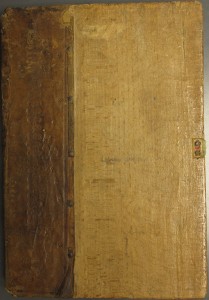 Munby gave his next incunable to the library on 22 November 1948 (Inc.3.B.3.152[4304]).  The book is a beautifully unspoiled copy of Suetonius’s Vitae XII Caesarum.  Published in 1480 in Venice by an anonymous printer identified as Johannes Rubeus Vercellensis (ISTC is00820000; Oates 2224), it is the earliest printed book donated to the library by Munby.  The quarter binding – of brown goatskin with blind-tooled decoration over beech-wood boards, with a stub of red-stained alum-tawed leather for the missing fastening clasp at the fore-edge of the upper board, and a decorated rhomboidal-shaped brass catch at fore-edge of the lower board – is untouched and remains in very good condition.  The book includes a few marginal manuscript notes in a late fifteenth-century humanistic cursive hand, the ownership note “P. Matthei Fasennis [?]” on leaf a2 recto, and a late nineteenth- or early twentieth-century note in Italian on leaf b6 verso about the completeness of the text despite the cancellation of faulty leaves b7 and b8, which contained misplaced duplicate text.  The volume was bought in Italy by Thomas Ashby (1874-1931), archaeologist and director of the British School at Rome, and bears his book label with crest and motto “In unitate robur” on upper pastedown.  It left Italian soil for the first time when brought to England in 1930, following Ashby’s appointment to a senior research studentship at Christ Church, Oxford. 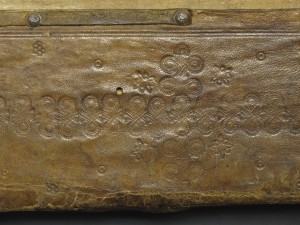 The fifth and last of Munby’s incunables (Inc.4.D.2.17[4333]) (purchased by the Library from Munby in 1950 rather than a donation) is a copy of the only edition of the Sermones floridi de tempore by the Dominican friar Leonardus de Utino (c. 1400- c. 1470), edited by Jodocus Badius Ascensius (1462-1535) and published in Lyons by Johannes Trechsel on 15 July 1496 (ISTC il00142000; Oates 3217.5). The book is not rare, but interesting for its early binding and provenance. Its quarter blind-tooled pigskin cover over beech-wood boards is in typical German style, with brass clasps anchored to the fore-edge of the lower board and brass catches at the fore-edge of the upper board.  It is indeed attributable to the bindery of the Dominican Cloister at Wimpfen am Neckar in Baden-Württemberg, active between circa 1470 and 1550.  Moreover, the book bears notes relating to its acquisition in 1500 in “meding” [probably the Dominican nunnery of Medingen near Dillingen] by the Dominican friar and confessor Johannes Lenglin (active 1484-1515) of the Dominican Cloister of Frankfurt am Main, who added the coloured initials and rubrication, and a number of marginal notes and comments both in Latin and in German.  Discharged as a duplicate by the Stadtbibliothek of Frankfurt, the volume bears the stamp of Gerschel’s [Oskar] Antiquariat in Stuttgart.

Early this year and quite by chance, I came across a copy of Thomas Browne’s Religio medici (London: 1736), with a label inside recording its donation by Munby in 1955.  This was not surprising in itself, but when I looked up this copy in the Newton catalogue, I found that Munby’s name was not recorded as the donor.  Adding information on provenance to catalogue records for newly-acquired books is a relatively recent practice in libraries and – given the immense size of the Library’s collections – a retrospective project to add this valuable information to the online catalogue for all our holdings would be difficult to undertake.  With this in mind it seemed likely that many other books were given by Munby, and after a manual search of most of the books in the class 7000 (i.e. eighteenth-century books acquired over the last century or so), about fifty additional titles given by Munby were discovered and notes added to their records.  Similar searches of the seventeenth- and nineteenth-century holdings have yet to be completed, but this is a good start. 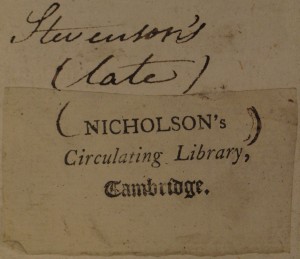 As with the incunabula the earliest donations appears to have been in the late 1940s, with a volume on the trial of Marie Antoinette (London: 1794), of which there is only one other copy in this country, and a guide to learning Italian (Amsterdam: 1709), both of which came in October 1949.  Compiled by Giovanni Veneroni, Italian interpreter to Louis XIV, Le maître italien (7760.e.20) is particularly interesting because it came from John Nicholson’s circulating library in Cambridge.  Nicholson, known to everyone in the town as ‘Maps’, furnished students with books at a reasonable subscription for much of the second half of the century.  At his death in 1796 his business was continued by his son and later grandson (both called John) until 1822, when it was acquired by Thomas Stevenson.  He discontinued the library but the bookselling business passed to the predecessors of the publisher Macmillan.  The famous portrait of Maps, by Philip Reinagle, hangs on the south staircase up from the Entrance Hall of the Library. 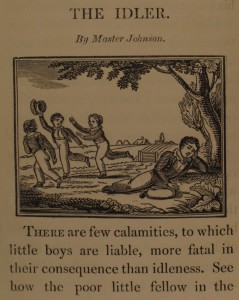 One of the more interesting nineteenth-century books is a locally printed book of moral improvement for children: The picture exhibition, containing the original drawings of eighteen disciples (8400.e.8).  This was printed in Swaffham in 1830 and is one of only three copies recorded in the UK (Bodleian and the National Art Library being the others).  The text was first published in 1774 and went through six editions by the end of the century, including in Glasgow (1781), Massachussetts (1788) and York (1800).  Each of the eighteen (imaginary) pictures tells a story with a strong moral tone, intended to discourage the young from misbehaving.  Attributed by some to Oliver Goldsmith, the text of our edition was revised by E. H. Barker, a classical scholar who entered Trinity College Cambridge in 1807.  He lived for most of his life in Thetford (twenty miles south of Swaffham), but died in poverty in 1839 after a spell of imprisonment for debt.

The last book I’d like to mention in detail is a volume (7100.d.792) containing two works: the Book of Common Prayer (Cambridge: 1733) and the Psalms (London: 1732).  Both editions are rare: the Psalms is one of only four known copies and the Common Prayer is unique.  But this volume is also of interest for what it tells us about the people who have owned it.  Pasted to the inside of the rear cover is a slip of paper which records the death in 1821 of the Revd. Robert Squire, Vicar of Kempley (in Gloucestershire) from 1787 until 1821.  Squire’s church, St Mary’s, is one of two churches in the village (the other, in the Arts & Crafts style, was completed in 1903), and boasts what is apparently the oldest surviving roof of any building in Britain and the most complete set of Romanesque frescos in northern Europe (both dated to c.1120).  But 90 years earlier, at the time of its production, we know that this volume was in Greenwich, London, because the owner – probably the person who had the two texts bound together – commemorated the birth of two sons inside the front cover.  On a large piece of paper, a border (measuring 88mm by 135mm) has been made using printers’ ornaments, within which is the text: William Clarkson, Born at Greenwich, November 25, 1730 [and] Henry Clarkson, Born at Greenwich, December 26, 1732.  Such survivals are rare and this example is probably unique.  These keepsakes may have been produced at a visit to a printing shop (examples from the Oxford and Cambridge University presses are known) and similar examples (though not recording births) have been recorded in Brian North Lee’s Early printed book labels (Pinner: 1976), as they were often pasted into books for safekeeping and to mark ownership.  At a time when a Bible or Prayer Book might have been the only books in many households, such books came to be used for recording family history, as in this case. 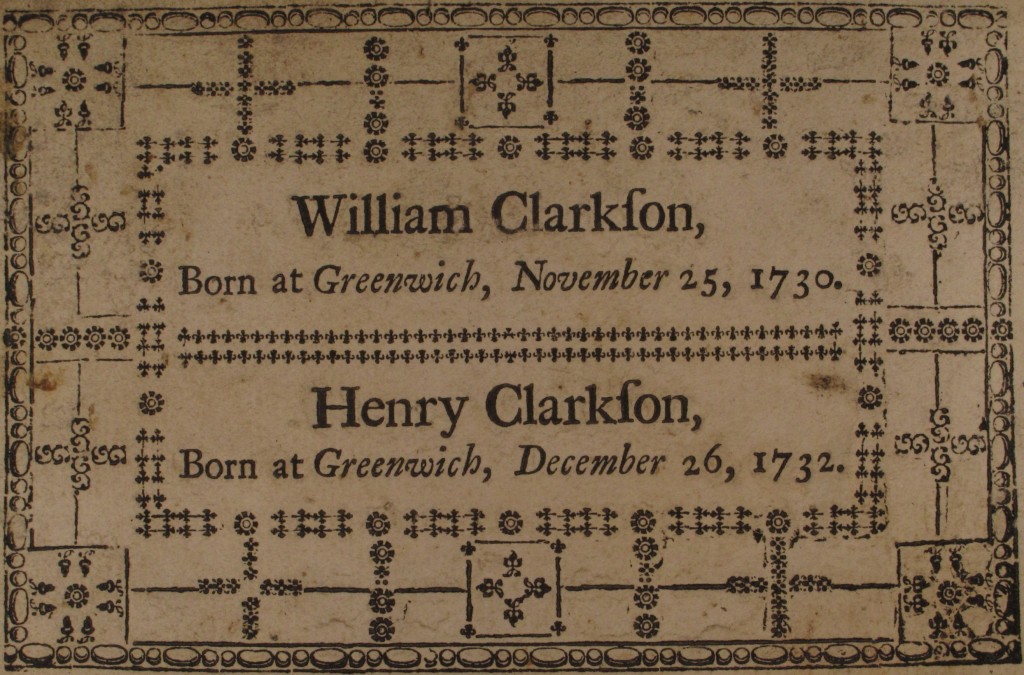 Considering Munby’s donations as a whole, the vast majority do not carry his personal bookplate or book-label (present in virtually all of the bibliographical works bought by the Library after his death), which suggests that they were not from his own library but that they were purchased with the intention of being donated to the University Library.  It is noticeable that many of the eighteenth-century books are very rare, some surviving in only a handful of copies, which can also be said of three of the incunabula.  So, not only was Munby acquiring books the Library did not already have, but he also sought out editions which were especially rare and desirable.  Alongside the Munby collection purchased by the Library in 1975, and the Fellowship established in his memory, his donations stand as a fitting memorial to the generosity of a giant among Cambridge bibliographers.