Posted on 16 January 2014 by Special Collections 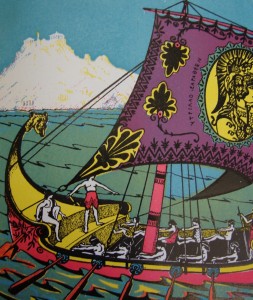 The University Library has recently acquired a collection of over 70 titles from the library of the late Jonathan Gili (1943-2004), a documentary film-maker, small-press publisher and collector of eclectic tastes, and his wife Phyllida.  His father was Joan Gili, a publisher and a translator of Lorca who co-founded the most celebrated Spanish bookshop in Britain: Dolphin Books.  Jonathan Gili was passionate about printed ephemera. He collected many first editions and unique examples of art deco style in print form. His poetic vision of the world is exemplified in this collection, mostly consisting of Catalan and Spanish material ranging in date from the 16th to the 20th centuries. There are also items in Portuguese and Mallorquín, with a smaller number of items in French, Latin or Provençal, all somehow connected with the Iberian peninsula. 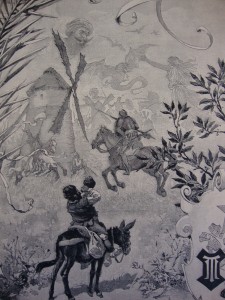 The collection features works by major figures of the Catalan literary tradition, in particular the Renaixença, Modernisme and Noucentisme movements. Worth noting are presentation copies of Els fruits saborosos by Josep Carner, Salvatge cor by Carles Riba and Oracions by Santiago Rusiñol.  Also represented in the collection is a selection of Spanish chapbooks and a small number of zarzuelas (Spanish operettas) with music by two famous composers of the genre: Amadeo Vives and Rafael Callejas.

Personal favorites include Oracions (1897), a book of poems by Santiago Rusiñol, one of the leading figures of the Catalan modernist movement; and La ilustración artística (1895), a monographic issue dedicated to Cervantes’ El Quijote.  Rusiñol wrote Oracions in collaboration with the artist Miquel Utrillo (1862-1934) and the composer Enric Morera (1865-1942). This famous collection of prose poems features thirty-two colour plates with drawings by Miquel Utrillo and musical notations in the text by Enric Morera. Oracions responded to the concept of “total work of art”, which aimed to integrate different artistic languages in a single work.  La ilustración artística contains over twenty engravings featuring the covers of the most important editions of El Quijote from 1605 to 1894, together with a three-page catalogue of all the editions of El Quijote published in Spain and abroad. 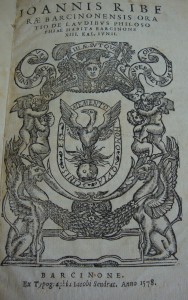 The earliest book in the collection is a sermon by the Archbishop of Valencia, Juan Ribera.  Printed in Barcelona in 1578, the Gili copy is the only copy known outside Madrid.  The collection also contains some interesting bindings, including Vertot’s Histoire de la conjuration de Portugal (Paris: 1689) in contemporary gilt leather, Marmontel’s Les Incas, ou la destruction de l’Empire du Perou (Paris: 1777) in the original blue paper wrappers, and a short work on the siege of Perpignan, printed in Barcelona in 1642, in eighteenth-century coloured paper wrappers.  It is the only copy of this edition in the UK.  Finally, there are two volumes of a bibliographical interest, which contain six very rare eighteenth and early nineteenth century booksellers’ catalogues.  Both record the stock of Antonio Sancho, a bookseller in Madrid, and include both modern (at the time) and old books.  The first volume contains five individual catalogues, ranging in date from 1781 to [1794?] and the second volume contains just one catalogue, dated 1806. The Gili Collection adds significantly to the Library’s holdings of Spanish and Catalan works, which were boosted in 2013 by the acquisition of a large collection of late eighteenth- and nineteenth-century chapbooks.  More detailed blog posts will follow on some items in due course. 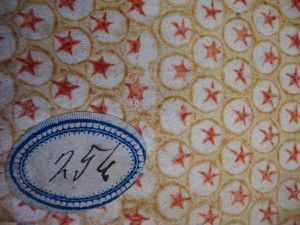