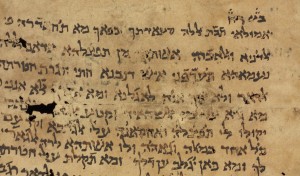 Detail from a letter about a marital dispute, from the Lewis-Gibson Genizah collection. L-G Arabic 2.51

In August 2013 Cambridge University Library and the Bodleian Libraries, Oxford, jointly acquired 1700 medieval Jewish manuscripts collected by the twin sisters Agnes Smith Lewis and Margaret Dunlop Gibson. The manuscripts were purchased by the intrepid ladies as they passed through Egypt on their visits to the monastery at St Catherine’s, Sinai, towards the end of the nineteenth century.

On their return to Cambridge, their friend Solomon Schechter identified one of their manuscripts as the lost Hebrew original of the book of Ben Sira (known in the Christian tradition as Ecclesiasticus), a sensational discovery. Schechter travelled to Cairo to find the source of the manuscripts, uncovering the remarkable hoard known as the Cairo Genizah and bringing 200,000 medieval Jewish fragments back to Cambridge University Library, the famous Taylor-Schechter Genizah Collection.

The sisters’ own manuscripts, minus the leaf of Ecclesiasticus that they donated to the UL, were given to Westminster College, a theological college of the United Reformed Church, where they remained until recently. In 2012, Westminster decided to offer them for sale to the UL for £1.2 million. Since this was a considerable sum for one institution to find, Cambridge, for the first time, entered into a partnership to purchase the manuscripts jointly with Oxford. Following a successful public appeal the Lewis-Gibson Collection is now undergoing careful conservation and digitisation in Cambridge. A new exhibition in the Library Entrance Hall cases offers the first chance to see a selection of these fascinating manuscripts, along with materials relating to the fascinating story of their discovery. On display during Library opening hours from 20 January until 15 February.