Posted on 3 February 2014 by Suzanne Paul 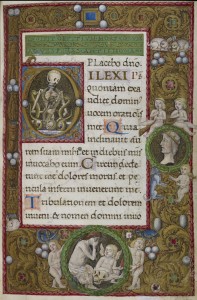 The Sandars lectures for this year will be given by Professor Nigel Morgan, Emeritus Honorary Professor of the History of Art in the University of Cambridge.

The lectures were instituted in 1895 following a bequest from Samuel Sandars (1837-1894), a great bibliophile and benefactor to several Cambridge institutions. Sandars stipulated that there should be one or more lectures on ‘Bibliography, Palaeography, Typography, Bookbinding, Book Illustration, the science of Books and Manuscripts, and the Arts relating thereto’ and particularly desired these topics to be illustrated by examples from Cambridge libraries.

It is highly appropriate that the theme of Professor Morgan’s lectures is ‘Samuel Sandars as collector of illuminated manuscripts’, drawing on the materials that Sandars donated to the University Library, the Fitzwilliam Museum and his old college, Trinity. Although the printed books that Sandars bequeathed to the University Library are grouped together under the classmark SSS and thus easy to survey, there has not previously been an attempt to evaluate Sandars’ achievements as a collector (and donor) of illuminated manuscripts.

Professor Morgan is a distinguished scholar of many of the Arts dear to Sandars. He is the editor, with Dr Stella Panayotova, of the series Illuminated Manuscripts in Cambridge, an ongoing multi-volume catalogue covering the collections of the colleges and Fitzwilliam Museum; he edited, with Professor Rodney Thomson, the second volume (1100-1400) of the Cambridge History of the Book in Britain; his other recent publications range from editions of monastic litanies to commentaries on spectacular thirteenth-century psalters and apocalypses. He was the recipient of a Festschrift in 2010, Tributes to Nigel Morgan: contexts of medieval art: images, objects & ideas.

Professor Morgan’s Sandars lectures will take place on three consecutive Wednesdays: 26 February, 5 March and 12 March. The venue is the Milstein Seminar Room in Cambridge University Library and all are welcome to attend.