Conduct literature for and about women in Italy: a new exhibition 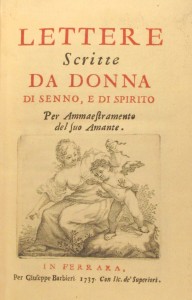 The  display cases outside the Map Department are hosting a new exhibition entitled “Conduct literature for and about women in Italy: prescribing and describing life”.  The display  marks the conclusion of an 18-month Leverhulme Trust–Isaac Newton Trust co-funded project on the production of printed conduct literature for and about women in Italy, between 1470 and 1900. Undertaken by Principal Investigator Dr Helena Sanson and Research Associate Dr Francesco Lucioli, and providing a systematic study of women’s conduct books over a broad chronological span, the project is the first of its kind in the field of Italian studies. A conference on the subject is being held in Cambridge on 20 and 21st March, and more information can be found here.

This exhibition provides a visual illustration of the evolution of the genre over the centuries. From the 1500s onwards, with the diffusion of the printing press and the establishment of the vernacular as a language of culture, Italy saw a proliferation of works which sought to define the nature of women, their role in society and their conduct in everyday life. Focusing mainly on female behaviour and manners, these texts are often centred around a tripartite model of female life (virginity, marriage, widowhood), and are usually authored by men.

The seventeenth to nineteenth centuries are characterized by a diversification of the types of text addressed to women: in addition to more traditional ones on female behaviour, we also find works designed to further the formal education of women (for example, by instructing them in scientific matters). From the 1850s onwards, one of the most striking innovations is represented by the emergence of female authors of conduct literature: that is, women writing about female conduct, and addressing themselves to members of their own sex.

Collectively, these works on conduct and on women’s education constitute a corpus characterized by aspects of both continuity and change. From the long-standing figure of the good ‘Christian woman’, to the courtly lady and the bourgeois mother and wife, from the ‘enlightened’ eighteenth-century woman to the new ‘citizen’ of post-Unification Italy, these works offer a fascinating account of the changing role of women according to the needs of society. The exhibition can be viewed until 22 March by members of the Library and their guests. Those who do not hold Library cards should contact exhibitions@lib.cam.ac.uk to arrange a time to see the display.