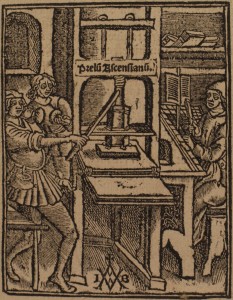 The library has recently acquired, with help from the Friends of Cambridge University Library, an important sammelband (catalogued at the shelfmark 5000.d.122) of nine early sixteenth-century works, including the so-called Appendix Vergiliana (poems spuriously attributed to Virgil but probably assembled in Late Antiquity), a short work by the early Christian writer Lactantius and seven works by the fifteenth-century Bolognese writer Filippo Beroaldo.  Printing dates range from June 1505 to April 1510.  In addition to the rarity of each individual item, this collection is significant for another reason; it is in an early sixteenth-century Cambridge binding and has sixteenth-century Cambridge provenance.  The volume was bound by the Cambridge stationer and bookbinder Nicholas Spierinck, no earlier than April 1510 (the publication date of the latest work) and no later than 1533 (when it believed he ceased work as a binder).  Born in the 1470s into a family of stationers and booksellers, Spierinck worked first in Antwerp before moving to Cambridge shortly after 1500.  Unlike Oxford, where printing had been practised as early as 1478 (albeit with a long lull between 1486 and 1517), Cambridge had no printer until 1520, when John Siberch began work.  Spierinck seems to have started out as a bookseller, importing foreign books to sell to members of the University.  In 1534 he was appointed (with the binders Garrett Godfrey and Segar Nicholson) the first official Stationer and Printer to the University. 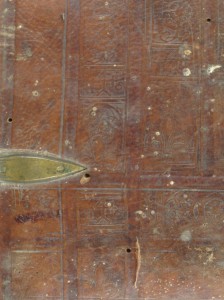 Detail of Spierinck’s ‘NS’ mark on the lower board

Spierinck was the subject of several studies in the twentieth century.  In 1904 George Gray (of the Cambridge bookbinding firm) published The earlier Cambridge stationers and bookbinders, in which he studied Spierinck’s bindings closely.  He noticed six separate roll tools and six stamps used by Spierinck, and listed 53 surviving bindings from his workshop, of which only 5 were in the University Library.  This study was updated by J. B. Oldham in his English blind-stamped bindings of 1952 to include a large number of bindings with a variant of Spierinck’s characteristic ‘NS’ mark; this added 254 bindings, taking the total to over 300.  The library is also lucky to possess, in MS. Add. 9866, Neil Ker’s valuable unpublished notes on the bindings of Spierinck and Garrett Godfrey, made in the 1960s and 1970s.  These include the locations of all their bindings known to Ker and include one volume, in the early seventeenth-century parochial library at Langley, decorated with Spierinck and Godfrey tools.

Our volume is significant as evidence of a collection of works being made by an individual at Cambridge in the first decades of the sixteenth century.  Luckily the early owners inscribed their names at various places within the volume, including an individual who may have been the one who collected these works together and had them bound.  At the head of the title page is a very early sixteenth-century inscription, unfortunately incomplete at the beginning: ‘…hether ex dono M[agist]ri Collis‘, i.e. the book was given by a Master Collis to someone whose surname ended ‘…hether‘.  There are signs of a letter or letters before the initial ‘h’ so it’s unlikely that the full surname is Hether.  Master Collis could be the William Collys who took his BA in 1510/11, MA in 1514 and was a Fellow of Peterhouse from 1512.  Shether is the only surname recorded by Venn which fits the truncated ‘…hether‘ and occurs twice in Cambridge in this period.  One is Robert Shether, who took his BA in 1512/13, MA in 1516/17 and BD in 1524/25.  He was a Fellow of Peterhouse from 1517 until 1529 and a Vicar in Essex between 1528 and his death in 1557.  The other possibility is John Shether, who took his BA in 1521/22, MA in 1525 and was a Fellow of Christ’s College between 1526 and 1530.  He was incorporated at Oxford in 1539/40, took his BD in the same year and served as Rector of St Mary Woolnoth in the City of London between 1538 and his death in 1549.  The loss of the beginning of the inscription is particularly unfortunate, as it would have allowed us to be certain, but Robert Shether seems more likely given that both he and William Collys were contemporaries at Peterhouse.  Furthermore, William Collys and Robert Shether both served as clergy in Essex – Collys as Rector of Easton Parva (now Little Easton) and Shether as Vicar at Henham (7 miles NW of Easton Parva), Great Waltham and Burnham. 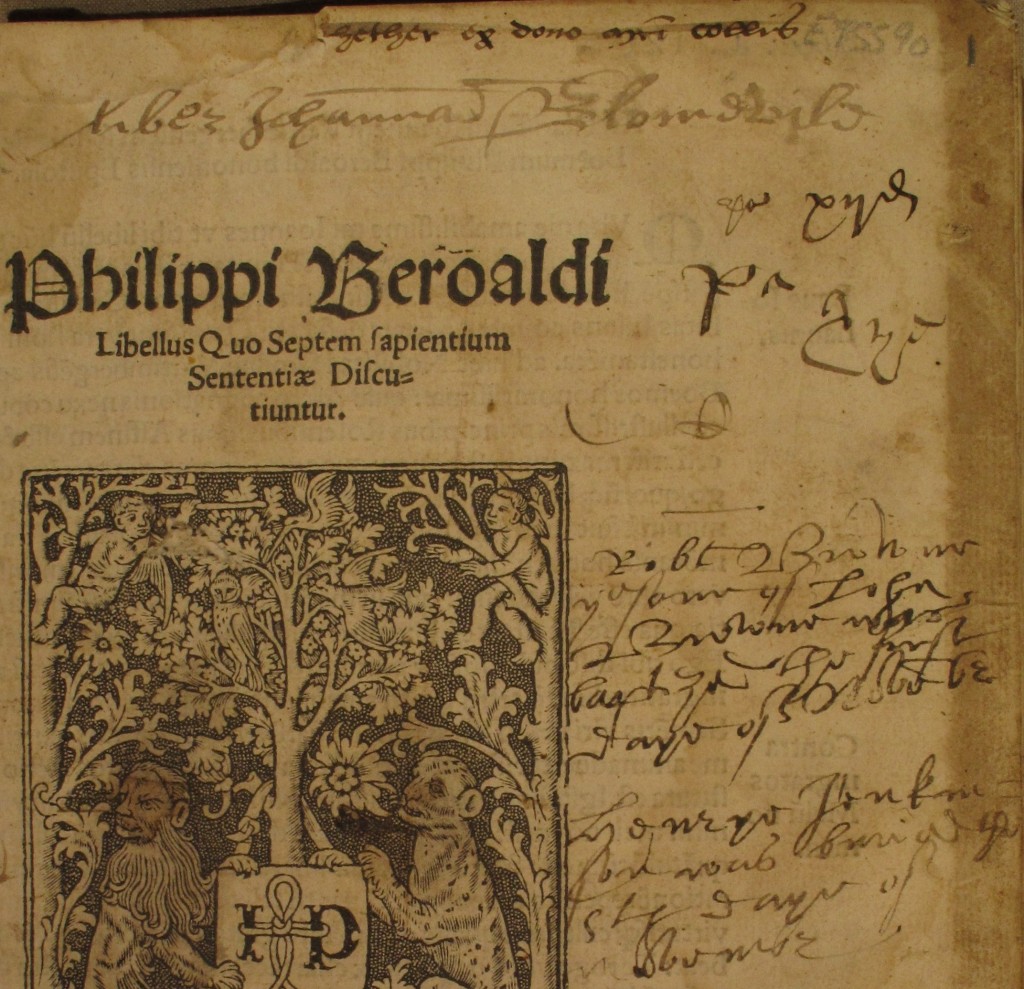 Inscriptions to the title of the first work in the volume.

The next recorded owner appears to have been a John Blomevile, who inscribed “Liber Johannes Blomevile” in a sixteenth-century hand on the title page of the first and second works, and the final leaf of the third work in the volume.  There are three possibilities: 1) the John Blomfield who matriculated sizar at Christ’s in 1564, 2) John Blumfilde, admitted scholar at Caius College in 1581, and 3) John Blumfeilde, admitted scholar at Caius in 1582.  There are a number of other sixteenth-century inscriptions on the title page of the first work, including a note of the baptism of a Robert Browne (on the first of November, in an unspecified year), and the burial of a Henry Jenkinson (on the fifth of November), possibly the individual who matriculated at Emmanuel College in 1589 and died in 1611.  A price in a sixteenth-century hand – “pr. xii d.” [i.e. 12 pence] – also appears on the title of the first work, but seems to be in a different hand to the other inscriptions.  The latest recorded owner seems to be the John Roope who inscribed his name in a seventeenth-century hand on the blank leaf at the end of the third work in the volume; this is presumably the John Roop admitted fellow commoner at Christ’s in 1646. 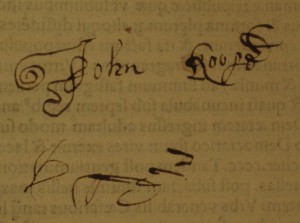 The binding itself, now somewhat rubbed, is blind-stamped calf over wooden boards, executed between 1510 and 1533.  The tools include crowns, pomegranates, roses, fleur-de-lys and a castle or tower.  It was once clasped from the upper to lower boards, but the clasps and upper catch are now gone.  This volume and its contents are complemented by another similar collection of works in the Library, also in a Spierinck binding.  This is a volume from Peterborough Cathedral Library, held on deposit at Cambridge University Library (classmark Peterborough.Sp.23).  It contains five works, dated between 1508 and 1521, including sermons printed by Wynkyn de Worde and Richard Pynson (both being one of only two known copies), a book by the first Cambridge printer, John Siberch, and two works printed in Strasbourg.  Such volumes point to the fluidity of the book trade in Cambridge at this early date, with books from Cambridge itself, London and the Continent all available to buy.  They also point to the ways in which books and their texts were disseminated in Cambridge, and the value owners placed on them, with books passing between friends as gifts as well as being bought and sold.  This volume was still valued (and probably still in Cambridge) in the middle of the seventeenth century, by which time it would just have been another ‘old book’ like those being chopped up for use in bindings; it is an important survival. 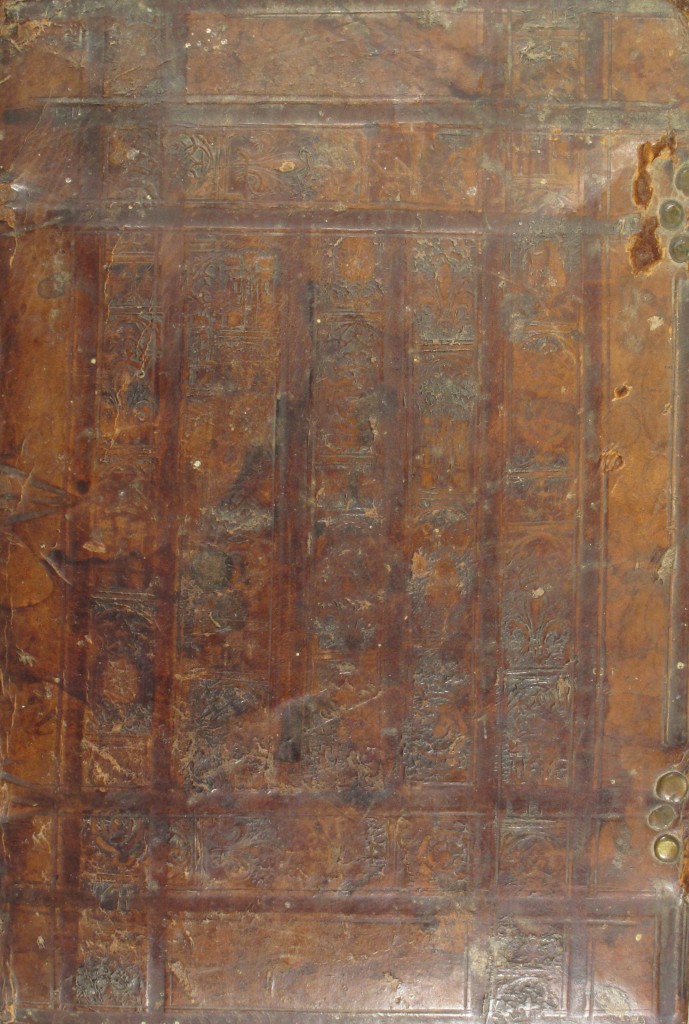