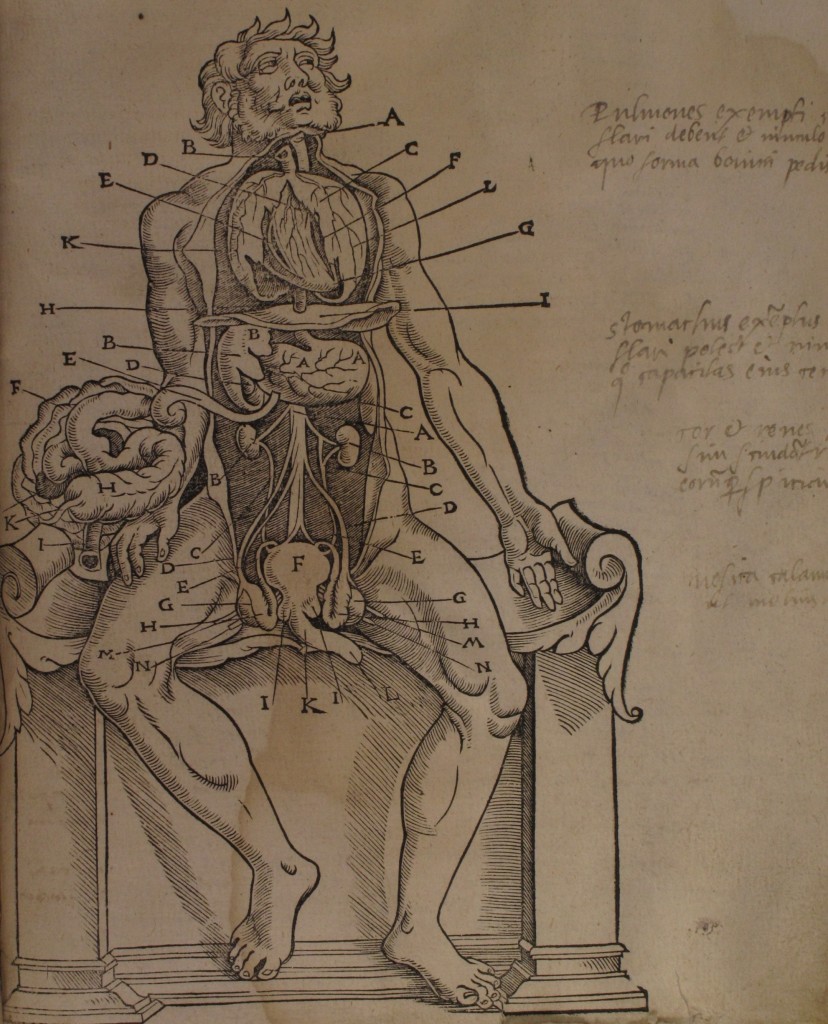 On this day – April 21st – in 1564, in the same week as Shakespeare was born, Thomas Lorkyn was appointed as the fourth Regius Professor of Physic (i.e. Medicine) in the University of Cambridge. The professorship was one of five founded by King Henry VIII in 1540 (the others being Civil Law, Divinity, Greek and Hebrew), which were known from their Royal origins as the Regius Professorships; all of them survive today.  Except for records concerning the public dissections he held in Cambridge in the 1560s and the brief details of his university career, we know very little about the man himself.  He was born at Frindsbury in Kent c. 1528 and came to Cambridge in 1549, matriculating at Pembroke Hall, before migrating to Queens’ where he took his BA in 1552.  He moved again, to Peterhouse, where he served as a Fellow from 1553-1560, taking his MA from the same college in 1555.  He was licensed to practise medicine in 1559 and in the following year married the daughter of John Hatcher (the second Regius Professor of Physic).  They had a son and six daughters, one of whom married the son of Edward Lively, another Regius Professor (of Hebrew) and in 1564 Lorkyn succeeded Henry Walker as Regius Professor himself.  He held the position for 27 years until his death in 1591, during which time he amassed a large and important library, part of which came to the University Library after his death.

At his death, an inventory was made, which listed 588 titles (in 631 volumes) on a range of subjects.  It also recorded his other possessions, including two silver toothpicks, seven pairs of spectacles, a lute and two gitterns (see Leedham-Green in the bibliography below).  But it was his desire that the books on medicine, about half of the collection, were to come to the University Library, which was at that time in the building now known as the Old Schools.  In his will (witnessed, interestingly, by the composer Thomas Tallis) he wrote: 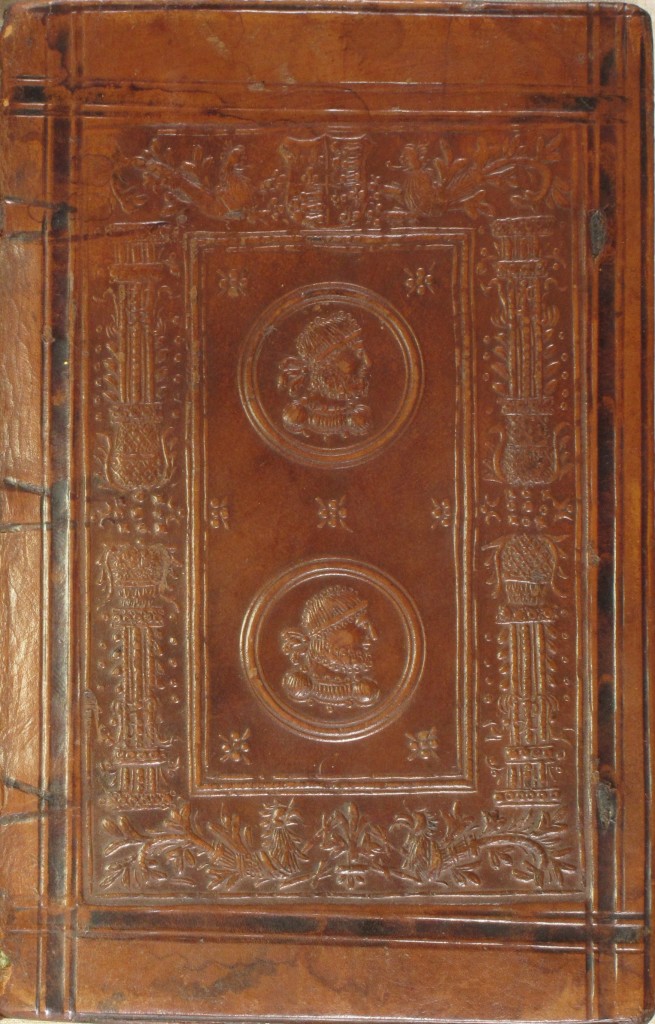 To encourage further benefactions, books in the Library were at this time grouped by donor rather than separated into subjects, and the Library was to pay for this ‘greate cubbard’ to be made within a year of his death, or the books would go to Peterhouse.  Although the cupboard seems to have been constructed within this time the books appear not to have arrived until December 1594, when they were entered in the donors’ book.  Keys to the cupboard were to be left with the Library-Keeper and Regius Professor, so that students of medicine might use them during their studies (though as undergraduates they would not have been allowed into the Library without their professor).  The bequest amounted to just over 250 titles in 272 volumes, the majority of which survive in the Library today, in the collection known as the Stars (the books which were in the Library before the arrival of the Royal Library in 1715).  Given the size of the Library’s collections at that time (435 volumes in 1574 and about 670 in 1583) Lorkyn’s bequest was therefore a sizeable one.  There were eight incunabula and the overwhelming majority of the books were printed on the Continent, with just four coming from England (in particular, London), pointing to the flourishing medical scene in Europe and the rather backward nature of the profession in England. 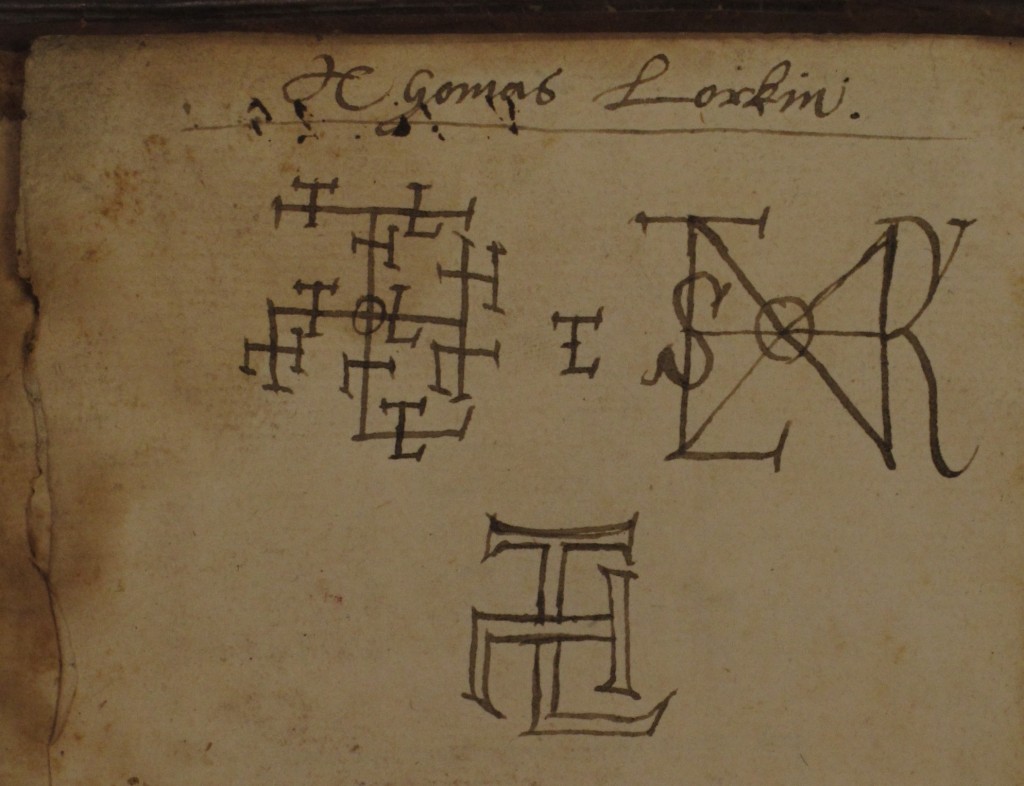 Other than the list in the donors’ book we know which books belonged to Lorkyn because he was in the habit of inscribing his name and a monogram on their title pages.  In the image to the left we see his full name, spelled Thomas Lorkin (rather than Lorkyn, which is how he usually writes it) and four examples of a monogram incorporating various letters of his name.  That on the upper right would become the monogram he used, incorporating every letter of both of his names.  He would also use a form of this as a stamp on his bindings, though on the two surviving examples it is not very clear.  Naturally, many of his books made their way into his hands from the libraries of his Cambridge contemporaries.  These include John Hatcher (second Regius Professor of Physic), Lorkyn’s father-in-law, and Nicholas Carr (Regius Professor of Greek), who latterly practised medicine.  The physician Thomas Moffett, who had studied with Lorkyn and completed his doctorate of medicine at Basel University, sent Lorkyn a copy of his De venis mesaraicis from the city in 1578.  Lorkyn’s copy, bound up with several other items, is one of just two known in the UK today.  The earliest of his books, a copy of Savonarola’s Practica medicinae printed in Venice in 1486, came from the library of King’s College, to which it was given by an unknown doctor in or shortly after 1543; it is inscribed “Gyuen to ye Kings Colleg ex dono doctoris [?] post mortem magistri Hobbys”.  Whoever gave it did so ‘after the death’ (c. 1543) of Robert Hobbys, fellow of King’s from 1499.  By what route it escaped King’s College library, at that time housed in the college chapel, we don’t know, but it was probably one of the many losses from the libraries of Cambridge in the post-Reformation years, until things began to stabilise again during the reign of Elizabeth I. 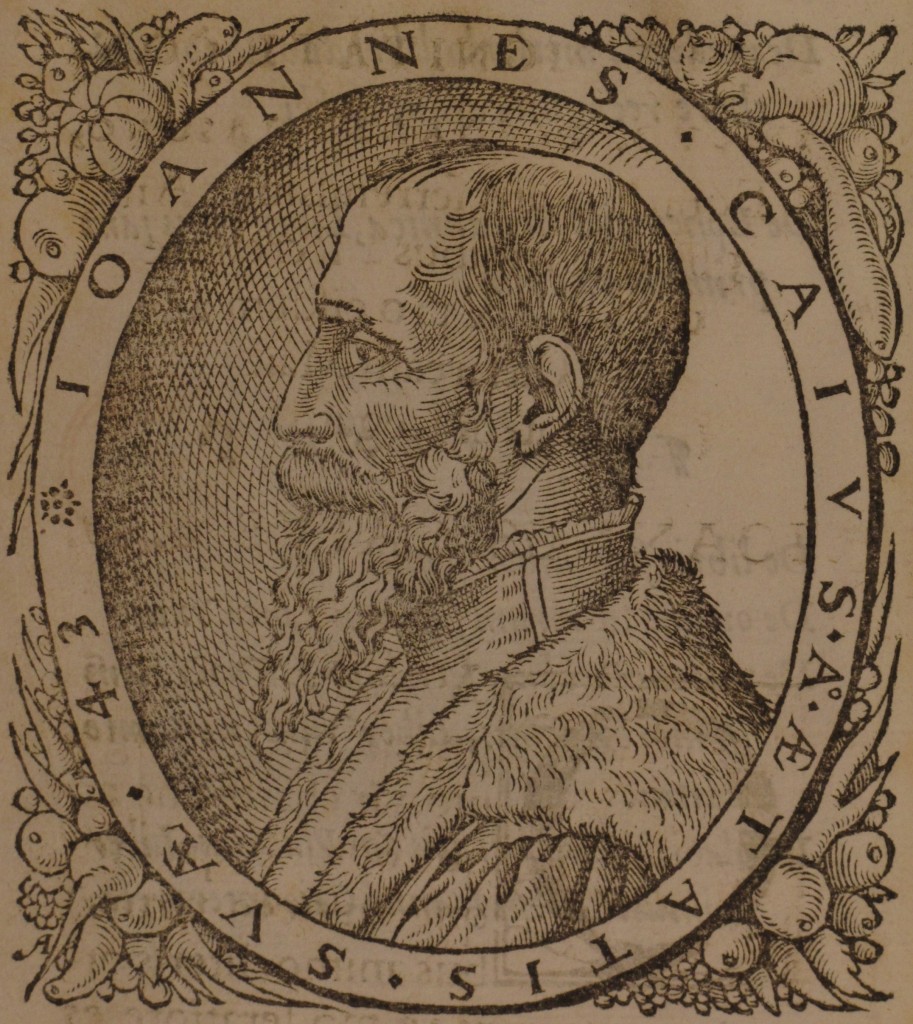 As one might expect from so large a collection, there is a great breadth in Lorkyn’s bequest, covering some two thousand years of medical knowledge.  The ancient world is represented of course by the complete works of the great 5th/4th-century BC physician Hippocrates, along with many of his individual works.  But we see also the works of Dioscorides, who wrote widely on the use of plants in medicine, Galen on the study of bones and on Hippocrates himself, and Oribasius, physician to the 4th-century pagan Emperor Julian.  The works of many of the great western writers survived late antiquity only in Arabic translations (before being re-translated in the later medieval period), and the period of roughly 750-1250, now called the Islamic Golden Age, produced many influential works on a range of subjects inspired by ancient texts.  From the 10th and 11th century Islamic world Lorkyn had a 1511 edition of a work by the Persian physician, philosopher, chemist and polymath Rhazes (854-925), given to him by a fellow physician Richard Sherman of Gonville & Caius College, and a 1507 Venetian edition of the Liber canonis medicine of Avicenna, who wrote some 450 works on range of subjects, of which forty were medical. 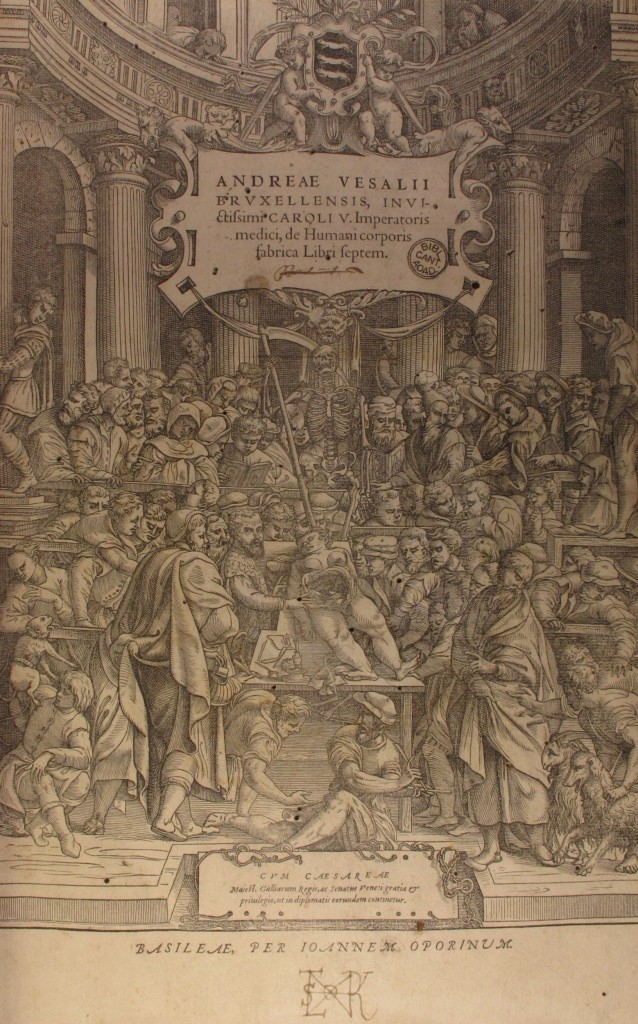 Writers from Lorkyn’s own age are naturally well represented and we see several Cambridge men on his shelves, including William Turner of Pembroke Hall (the volume containing two of his works has been missing from the Library since at least 1804), the first Englishman to study plants scientifically, Timothy Bright of Trinity College (physician and inventor of modern shorthand) and of course John Caius, refounder of Gonville & Caius College.  Lorkyn paid 2 shillings and 4 pence, possibly in 1558, for the pocket-sized 1556 Louvain edition of Caius’ works (valued at just 4 pence in his post-mortem inventory).  Lorkyn and Caius are linked in the person of Andreas Vesalius, the great 16th-century anatomist and author in 1543 of De humani corporis fabrica, of which Lorkyn had the second edition of 1555.  Caius lodged with Vesalius in Padua during the preparation of De fabrica, and it was through men like Caius and Lorkyn that his works were disseminated in England.  In the new statutes for Gonville & Caius College, Caius included an annual dissection for medical students and in 1564/5 (the year of his election to the Regius Professorship) and 1566/7, we know that Lorkyn himself supervised dissections at Magdalene College, thanks to notes in his heavily annotated copy of Loys Vasse’s In anatomen corporis humani (Paris: 1541).  On leaf A3 recto of this work, which Lorkyn may have used while the dissection was in progress, we read:

Anno domini 1565 the xxviii of marche I did make anatomie of richarde [overwritten with the name ‘rauffe’] tiple at maudlin colledge continuynge weddensdaie thursdaie & fridaie. fore none and afternone. fro 8 til xi & from 1 to 6 & on satterdaie morning buried him chested [i.e. in a box] at 8 a clocke beinge the 5th Daie after his hanging. 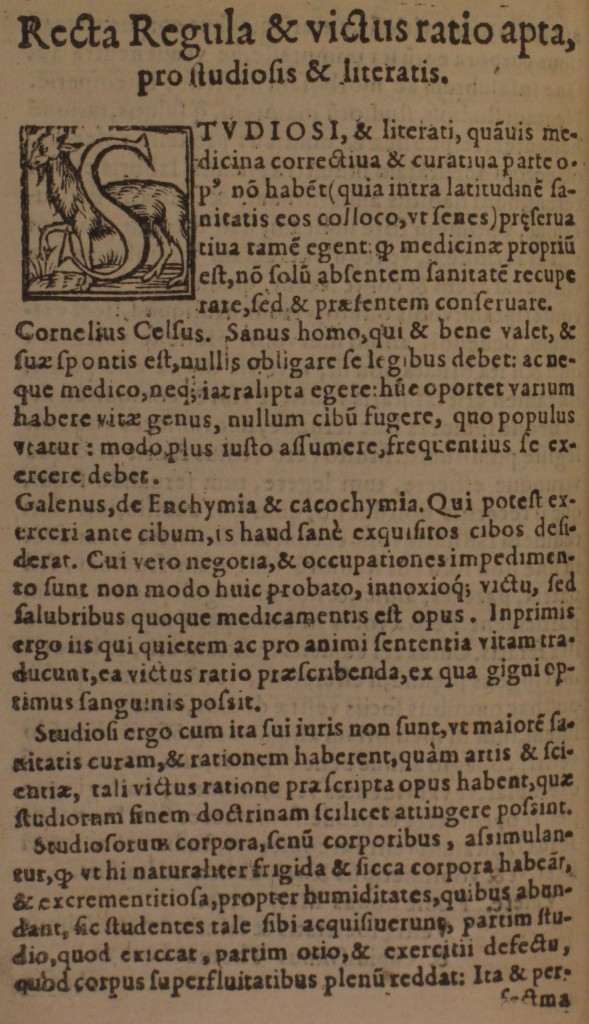 Finally, mention should be made of Lorkyn’s one publication, which appeared two years before his election to the Regius Professorship, in 1562.  It is entitled Recta regula et victus ratio pro studiosis et literatis and was a sort of guidebook on how students ought to lead their lives.  It brings together authorities including Galen, Hippocrates, Ficino and others on the appropriate balance of food and drink, sleep, motion and so on.  At just eight leaves long it is a slight contribution to the literary world of sixteenth-century Cambridge, but is today a very rare book indeed.  Only two copies are known to survive, both of which are in the University Library; one is Lorkyn’s own, and the other came in 1715 with the library of John Moore, Bishop of Ely.  Despite Lorkyn’s own limited literary output, his great library has carried his name through the centuries to our own day.  Used by Cambridge scholars during his own lifetime and, in the 423 years since 1591, available to researchers in the University Library, it remains a significant collection.  In the words of Charles Sayle, “Lorkyn’s monument is his library”.

In writing this post, the following works have been extremely useful: