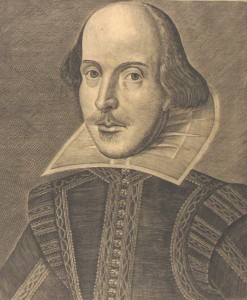 William Shakespeare was baptised at Holy Trinity Church, Stratford-upon-Avon, on 26 April 1564; since at least the eighteenth century, his birthdate has been given as 23 April. With a symmetry that has helped to fix the date of his birth, he died on 23 April 1616. Although Shakespeare’s works have been read, performed, and written about more or less continuously since they were first printed and acted, their formal study within academic institutions is much more recent. There is a long and lively history of performing Shakespeare’s plays in Cambridge, and of Shakespeare criticism and editing by Cambridge academics; all over the world, many students will read Shakespeare for the first time in one of the Cambridge School Shakespeare editions. A new exhibition in the Library’s Entrance Hall cases brings together a small number of books printed in the late sixteenth and early seventeenth century, which together demonstrate some of the ways in which early readers, perhaps students in particular, would have encountered and responded to Shakespeare. The exhibition also includes some of the earliest Shakespeare examination questions ever set, and sat, in Cambridge.

Within about five years of Shakespeare’s death, plans were underway for what would now be called a ‘Collected Works’, then a very unfamiliar format for the printing of plays, which (if they were printed at all) were usually sold in cheap, often poorly printed ‘quartos’, something like a modern paperback. The publication of Ben Jonson’s Works in 1616 was the first time the prestigious large ‘Folio’ format had been used for the printing of plays. What is now often called the ‘First Folio’ included thirty-six of Shakespeare’s surviving thirty-eight plays (the omissions were the co-authored Pericles and Two Noble Kinsmen), but not the sonnets or poems; eighteen of the plays had never been printed before. Two of the main movers in the project were John Heminges and Henry Condell: they were long-time members of the Lord Chamberlain’s Men, later the King’s Men, the company with which Shakespeare had acted and for which he wrote the bulk of his plays. In their preface to the First Folio, they stated that they had ‘but collected [Shakespeare’s plays], and done an office to the dead, to procure his Orphanes, Guardians; vvithout ambition either of selfe-profit, or fame: onely to keepe the memory of so worthy a Friend, & Fellow aliue, as was our SHAKESPEARE’ (A2v). Heminges and Condell may indeed have been particular friends of the playwright: they were both among the small number of friends left money in his will for the purchase of a mourning ring, and both of them had sons called William, which might indicate that Shakespeare had been their godfather. Today the First Folio is one of the most famous books in the world, probably more collected than read for much of its history. It is not especially rare (around 220 copies survive) but it has become a trophy beloved of collectors, and priced accordingly on the few occasions when one comes on the market. 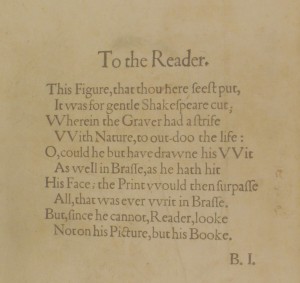 The ways in which Shakespeare was commemorated after his death, and in which he has been remembered since, very quickly split into at least two strands. The portrait of Shakespeare in the First Folio is one of only two of the likenesses of the poet thought to resemble him (or at least to have a fair chance of doing so): Ben Jonson’s poem on the page facing the engraving claims that Martin Droeshout, the engraver, has ‘hit’ his face ‘well’, and Jonson was by many accounts one of Shakespeare’s closest friends. The other likeness is the monument in Holy Trinity, by the sculptor Geerart Janssen: although notoriously described by the critic John Dover Wilson as resembling ‘a self-satisfied pork-butcher’, it had been erected before the death of Anne Hathaway, Shakespeare’s wife, in 1623. Yet Jonson’s poem exhorts the reader to look ‘not on his picture, but his book’, that is, consider the work, not the individual or the life. In the ‘Second Folio’ (1632), John Milton (in his first published poem, conceivably written when he was at Christ’s College, Cambridge) went even further, declaring that Shakespeare needed no monument, being remembered above all in the responses of readers, poets (and, here perhaps only implicitly, audiences).

Accordingly, most of the books on display in some way offer responses to Shakespeare as a playwright and poet in the late sixteenth and early seventeenth century. One exception can be found in the page displayed from the Works of Ben Jonson (1616): it is a reminder that Shakespeare was also an actor, and records what may have been one of his last appearances, in 1603 in the cast of Jonson’s Sejanus (a Roman tragedy that was not only unpopular in the theatre but also got Jonson into trouble at court, because of its parallels with contemporary politics).

The earliest book on display is Francis Meres’s Palladis tamia (1598), which includes a brief and hugely valuable survey of English writing at the time. Meres praises Shakespeare thus:

As Plautus and Seneca are accounted the best for Comedy and Tragedy among the Latines: so Shakespeare among the English is the most excellent in both kinds for the stage; for Comedy, witnes his Gentlemen of Verona, his Errors, his Loue labors lost, his Loue labours wonne, his Midsummers night dreame, & his Merchant of Venice: for Tragedy his Richard the 2. Richard the 3. Henry the 4. King John, Titus Andronicus and his Romeo and Juliet (Oo2).

Of his poetry, Meres claimed that ‘the sweete wittie soule of Ouid liues in mellifluous & hony-tongued Shakespeare, witnes his Venus and Adonis, his Lucrece, his sugred Sonnets among his priuate friends, &c.’ (Oo1v-Oo2v).

More evidence of the way in which Shakespeare was admired can be found in the ‘Parnassus’ plays, three Christmas entertainments written and performed by students at St John’s College, Cambridge between 1598-1602. All three plays include quotations from and imitations of Shakespeare: in the First part of the Returne from Pernassus, the students discuss the fashionable writers of the day, including Spenser, Jonson, and Shakespeare; Ingenioso mocks his friend Gullio, saying that he sleeps with Venus and Adonis under his pillow and that, as a result, ‘We shall have nothinge but pure Shakspere, and shreds of poetrie that he hath gathered at the theators’, although he also praises ‘sweete Mr. Shakspeare’. In the Second part of the returne (on display), two of the student actors appear as ‘Richard Burbage’ and ‘William Kempe’, the leading actors of the Lord Chamberlain’s Men, mocking university-educated playwrights and discussing the current rivalry between Jonson, Shakespeare, and other playwrights. As well as being astonishingly modern in its ‘metatheatricality’, this particular allusion and the others suggest both the familiarity of Cambridge students with Shakespeare’s works at the time, both in print and on the stage. The London acting companies, including Shakespeare’s, did tour, and are known to have performed in both Oxford and Cambridge. 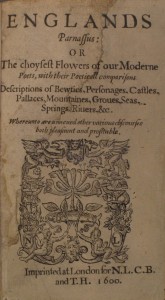 Many students, and readers more generally, would have been likely to have encountered Shakespeare’s plays and poetry in the form of extracts collected in one of the ‘miscellanies’ or anthologies very popular around 1600. The one on display is Englands Parnassus (1600). It arranges its ‘gobbets’ under headings, reflecting the standard humanist reading practice of ‘commonplacing’, copying instructive, particularly well-phrased or otherwise useful extracts into a notebook under pre-determined headings. In this collection, for example, extracts from The Rape of Lucrece can be found under ‘Time’, ‘Women’, and ‘Discriptions of Beauties & Personages’; from Venus and Adonis for ‘Lechery’; from Richard II for ‘Death’, ‘King’, and ‘Albion’, and from Romeo and Juliet for ‘Love’, ‘Time of Day’ and (again, on display) ‘Discriptions of Beauties & Personages’. There is no sense of dramatic context or character (this is what Romeo says when he first sees Juliet, 1.5.43-8); what matters is the language.

The Faculty of English was a relatively late addition to Cambridge’s arts faculties, not being founded until 1917. The history and criticism of English language and literature, including Shakespeare, had been studied and examined in Cambridge for over a generation by then, as part of the Modern and Medieval Languages (MML) Tripos, which was founded in 1883; the earliest Shakespeare paper seems to date from 1886. The 1914 Shakespeare paper is on display, together with its equivalent from 2013. Today, the Shakespeare paper is compulsory, and sat by English students at the end of their second year. Shakespeare is also an essential component of the ‘Tragedy’ paper, taken by all English students in their third year, there is an optional paper in ‘Shakespeare and Performance’, and many undergraduate and postgraduate students write dissertations on Shakespearean subjects.

Part of the Shakespeare paper set for the English tripos Part 1 examination, 2013.

Dr Hester Lees-Jeffries, curator of the exhibition and author of this post, is University Lecturer in Literature and the Material Text in the Faculty of English, and a Fellow of St Catharine’s College. She has published numerous articles on Shakespeare and other early modern literature, and her most recent book is Shakespeare and Memory (2013).