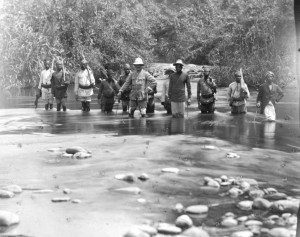 The Royal Commonwealth Society Collection is delighted to announce the acquisition of photographs and correspondence relating to the soldier and colonial administrator Lt. Col. Claude George Henry Sitwell (1858-1900). Sitwell served in the Afghan War of 1879-80, in Egypt in 1882 and again from 1892 to 1895. He joined the civil administration of Uganda in 1895 as a Vice-Consul, and served as Collector of Toro from 1897-99. Sitwell’s recent experience in Egypt and knowledge of Arabic made him a wise choice to lead the Sudanese troops who formed Uganda’s garrison. 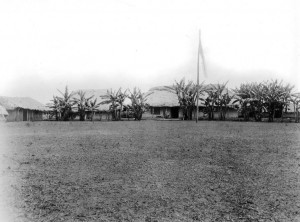 The photos vividly bring to life experiences Sitwell recorded in a diary, a copy of which is already held by the RCS.  Most document his life on the remote, undeveloped frontier posts of Fort Gerry (now Fort Portal), or Fort George, which was located to the west of Lake Edward. Communications were so poor that Sitwell had to travel by foot the entire way from Kampala, one day plunging through ‘bad swamps, up to one’s shoulders.’ At that time, there were only three European inhabitants in the vicinity of Fort Gerry, missionaries of the Church Missionary Society and the White Fathers’ Mission. 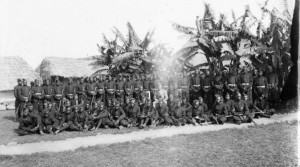 The photographs include images of Sitwell’s company of Sudanese infantry. He was clearly a natural leader and able to inspire the trust and respect of his men. Sitwell’s company was the only one not disarmed after the outbreak of a mutiny among some of the Sudanese troops in 1897. Sitwell laconically recorded the reaction of his company when he read out the news to them on 31 October, ‘was interrupted all the time by men saying “that if all the remainder of the regiment mutinied, that they would stick to me”. Not bad that’. 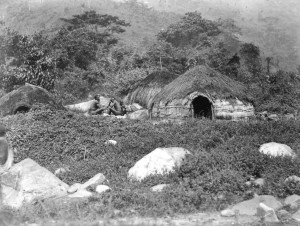 RCMS 172_3_27 Foothills of the Ruwenzori Mountains

Sitwell’s photographs also include images of his travels in the region on official business or safari, and a few of the indigenous people. In July 1898, he became one of the first Europeans to ascend to the snows of the Ruwenzori Mountains, first discovered by the explorer Henry Morton Stanley in 1889. Sitwell travelled to South Africa in 1899 with the Royal Dublin Fusiliers to fight in the Second Boer War. Sadly, he was killed in action at Hart’s Hill on 24 Feb. 1900.

Please follow this link to the on-line catalogue of the Sitwell collection: http://janus.lib.cam.ac.uk/db/node.xsp?id=EAD%2FGBR%2F0115%2FRCMS%20172