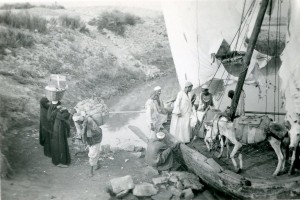 The Royal Commonwealth Society Collections have published an on-line catalogue of a recent acquisition: the photographs and archives of Henry and Phyllis Dobinson. Henry was born in Cardiff in 1914, the son of a railwayman, and went to work for the General Post Office in 1931. During the Second World War, Dobinson served overseas with the Royal Air Force in Kenya and the Middle East. In 1946, he married Phyllis Rich, who had worked for the Ministry of Supply. In 1949, Henry returned to Kenya to accept a post with the British East Africa Corporation’s telephone service in Nairobi, and Phyllis found employment in the clerical section of its Engineering Branch. Henry was an enthusiastic photographer, and the archives hold more than 800 photographs which he took himself or purchased from commercial photographers. Their subjects record Henry’s wartime experiences during 1942-45 and the couple’s life and travels within Kenya, Uganda and East Africa from 1949 to 1953. 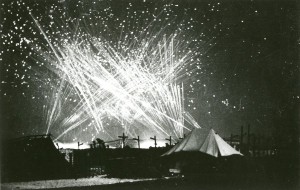 Many of the photographs document Dobinson’s life in the military training camps at Eldoret, illustrating accommodation in the European School or tents and huts, training exercises, comrades in the RAF, and recreational activities. The photographs also record some dramatic military events, including a striking image of searchlights and anti-aircraft fire over the night sky of the western desert in 1942. Other notable subjects include captured German and Italian artillery and tanks, and the arrival of part of the surrendered Italian battle fleet at Alexandria in 1943. 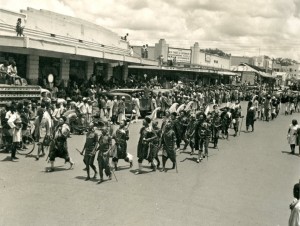 Other photographs date from Dobinson’s service in the Middle East during 1944-45, including travel to Cairo, Suez, the Pyramids, the Nile Valley, Haifa and Jerusalem. An album of more than 300 photographs illuminates the Dobinsons’ working and private lives in Kenya between 1949 and 1953. These photographs capture steamships, railways and motor cars; city and market scenes; Kenya’s peoples, and the great beauty and diversity of its landscape and wildlife. Dobinson’s photographs also record memorable events, such as the celebrations marking the granting of a city charter to Nairobi in 1950, and the visit of Princess Elizabeth and Prince Phillip in 1952, which had to be cut short following the death of King George VI. 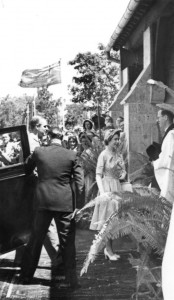 To view the Dobinson collection catalogue, please follow this link: