Literature of the Liberation: the French experience in print 1944–1946 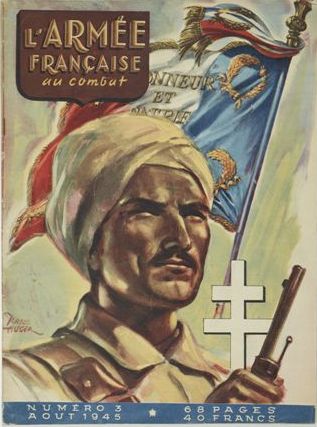 The cover of ‘L’Armée Française au combat’, No. 3, août 1945. Illustration by Raoul Auger.

A new exhibition in the Library celebrates the 70th anniversary of the liberation of Paris and shows some of the books that were published, mainly in France, after the liberation of Paris and before the end of 1946, on the subjects of the Second World War, the German occupation of France starting in 1940, and the country’s liberation by the Allies in 1944–1945. The books are from the Chadwyck-Healey Liberation Collection, the definitive collection of French books from this period on these subjects, which has been donated to Cambridge University Library by Charles Chadwyck-Healey and is still growing.

Beautiful books began to be published immediately after the liberation of Paris in August 1944 even though the war was still being fought in France. Once Paris was free and the Vichy government had collapsed there was no longer censorship, and it is the immediacy of this response and the quality of the books themselves that makes this period so interesting for the history of the book. The wide availability of fine, handmade papers at the end of the War is one of the discoveries of this collection.

Many of the volumes on display are association copies with important dedications, but it is the books themselves that are evidence of the importance that the French people attached to publishing accounts of their experiences during the crisis that had befallen France.

The exhibition is on show in the Milstein Exhibition Centre until 11 October, and is open 09.00–18.00 Monday to Friday and 09.00–16.30 on Saturdays (closed Sundays and Monday 25 August). There is also an online virtual exhibition. Admission is free.