Posted on 21 July 2014 by Special Collections 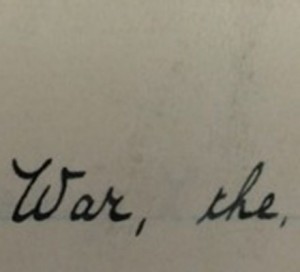 Starting from the stark index term, ‘War, the’, she has investigated the Archive to reveal how the Press responded to the War by supporting the families of employees who lost their lives, by assisting Belgian refugee scholars – and by promoting female staff to carry out roles previously undertaken by men. As Dr Grooms comments, ‘the poignancy of war is embedded in the records’. Take a look at her post: http://www.cambridgeblog.org/2014/07/cambridge-university-press-at-war/