Ghana: Our Days on the Gold Coast

Posted on 5 November 2014 by Francesca

The following post is the second in a series promoting the Library’s superb historic photographic collections of Ghana, which form part of the Royal Commonwealth Society (RCS) collections.  It is written by RCS volunteer Francesca Issatt in memory of Michael Fuller.  Francesca’s first post illustrated the collection’s rich records from Achimota College.  This post, by contrast, focuses on just two photographs, each from a different RCS photograph collection, but which were united in a publication called Our Days on the Gold Coast published in 1918.  By clicking on the photographs you can enlarge them.  The photographs were taken for publicity purposes, but appear as personal items in the RCS collection. 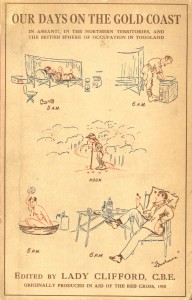 Illustrated cover of Our Days on the Gold Coast

The first photograph is of Sir Hugh Clifford (1860-1941) Governor of the Gold Coast (1912-1919) seated beside his wife Lady Elizabeth Lydia Rosabelle Clifford (?-1945) at a garden party attended by local chiefs on 10th March 1916 at Cape Coast Castle.  Neither the occasion of the garden party nor the names of the chiefs have been identified but it is known that the photographer was Mr R. Graves Smith.

On the reverse of the photograph Lady Clifford wrote:

“Old Government House, Cape Coast. Our garden party before a big durbar at the Castle. With chiefs – group. I had had [sic] to cut off half the Chiefs to fit the envelope but this may amuse you!” 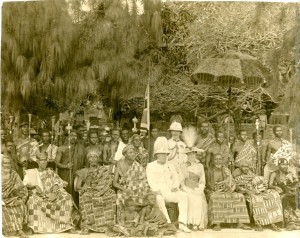 This note gives a personal touch to an otherwise a formal group portrait and also displays Lady Clifford’s sense of humour! As the wife of the Governor of the Gold Coast at the time she had a duty to carry out charitable deeds and to support good causes. One such endeavour was Lady Clifford’s short stories and poetry competition. In 1918 a book of winners and favourites was published for the British Red Cross, the frontispiece being a non-cropped copy of the RCS photograph of the garden party hosted by Sir and Lady Clifford.  The book also included twenty-five photographs by Mr Frederick R.C Lutterodt of Accra, including all those of Christiansborg and Accra, and photographs of Cape Coast Castle by Mr R. Graves Smith of Cape Coast.  Additional photographs in the book were gifted to the Red Cross by a number of individuals acknowledged on page fifteen. 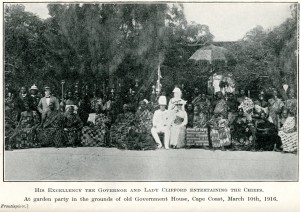 Frontispiece of Our Days on the Gold Coast. Captioned: His Excellency the Governor and Lady Clifford entertaining the Chiefs…

A photograph facing page 216 in Our Days on the Gold Coast is of a girl in nurses uniform with an adult nurse beside her.  It has been cropped and does not include the boy Scout who can be seen in the RCS’s version of the photograph, which was taken at Lady Clifford’s variety show for the Red Cross in 1917. The photograph is now part of the Smyly Gold Coast collection and is in a leather bound album. 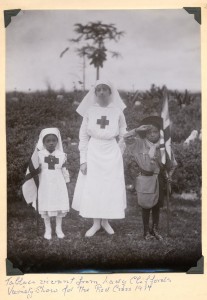 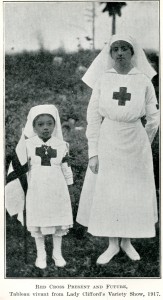 Photograph facing page 216 in Our Days on the Gold Coast

The beginning  of the album contains professional staged portraits of various members of the tableaux at the variety show. Characters include “Ancient West African”, “Modern West African”, “American Uncle Sam” and “Ancient Briton”. As this was a charity event it is likely that the photographs were available for guests to purchase to add to their own photograph albums; this is also suggested by the professional set up of the pictures. This album also contains pictures of Sir Philip Crampton Smyly at official events and tells a story of his early career as the Chief of Justice of the Gold Coast from 1911.

In 1912 Sir Hugh Clifford was appointed Governor of the Gold Coast. The two men knew each other professionally and would have socialised together along with their wives at private parties and public engagements and indeed appear together in a number of the album photographs. Although the photographs were taken at public events for publicity purposes they also had personal significance and represent important moments.

You can link to the descriptive catalogue of Sir Philip Crampton Smyly’s photograph collection at: http://janus.lib.cam.ac.uk/db/node.xsp?id=EAD%2FGBR%2F0115%2FY30448L