A guest post by Mel Bach of the Library’s European Collections and Cataloguing Department. 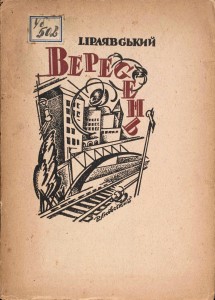 An exhibition of material from the library of Peter Yakimiuk, donated in his memory to the University Library, is currently on public display in the Library’s Entrance Hall. The Yakimiuk Collection is a major resource on Ukrainian history, politics and culture, and the exhibition explores the extraordinary geographical breadth of the diasporic publications it contains.

In 2011, the late Peter Yakimiuk’s family generously gave the Library his collection of material on Ukraine. It contains hundreds of books on Ukrainian history, politics and culture, with an emphasis on post-1945 Ukrainian-language diaspora publications. Many of the books are held in very few Western academic libraries, having been printed in small runs or distributed only through private channels. For Cambridge, where Ukrainian Studies was introduced in 2008, the donation is extremely significant, greatly bolstering the University Library’s Ukrainian collection.

The Yakimiuk Collection’s diaspora material comes from around the globe, representing the spread of the enormous Ukrainian émigré community. The twentieth century saw the greatest levels of emigration from Ukraine, for economic, social and political reasons. Western Europe received a significant influx of Ukrainians from Displaced Persons Camps after the Second World War, and all but one of the books in the exhibition date from 1945 onwards. While many displaced Ukrainians went on to leave the continent, many books in the collection come from West European countries in the first 10-15 years after the War, most notably from West Germany. The United Kingdom, France, Switzerland, Italy, and Austria are among the other European countries represented in the collection.

Outside Europe, the United States and Canada have high numbers of ethnic Ukrainians, and books from these two countries are significantly represented in the Yakimiuk Collection. South America also has a presence in the collection, albeit in much smaller numbers, and even Australasia is represented by a few books from Australia. Several books in the collection do not give a place of publication at all, or give it as Na chuzhyni – ‘In a foreign land’ (in other words, not Ukraine). As examples in the exhibition show, the place can often be determined on the basis of clues in the book in hand or from parallels with other material.

European material is housed in the case on the right of the main door as you enter the Library. The exhibits there include a 1941 book of poetry by Ivan Irliavs’kyi published in Prague, a novel by Valeriian Pidmohyl’nyi published for the first time as a single piece in Paris in 1956, and a book on folk art published not in the diaspora, but in Ukraine itself for the diaspora. The case also contains an example of the few non-bibliographic pieces in the collection – a set of the game Flirt produced in West Germany.

The other case, on the left as you enter, contains non-European material. Two publications for children in the Ukrainian diaspora are included, both published in 1953 – one, a book of adventures published in Australia; the other, a book from Winnipeg of Ukrainian poetry and prose about the Dnieper river. Other exhibits in the case include a 1949 Ukrainian history book published in Buenos Aires and a joint New York/Shanghai publication on the Ukrainian settlement of the Russian Far East.

A total of thirteen items are in the exhibition, and all but one are in Ukrainian. The captions for the exhibits can be read here.

The Yakimiuk Collection can be consulted by any University Library reader. The great majority of the books are paperback, many very fragile. These will all be housed in the Rare Books Department in the dedicated CCA-CCE.62 classmark. Robust hardbacks are being placed, where possible, in borrowable classes. Each record contains a provenance note, so a search in the catalogue for the phrase “Peter Yakimiuk” will bring up all processed material. The collection is expected to be fully catalogued by the end of 2014.

The exhibition runs from Monday 15 September to Saturday 11 October 2014. The Library’s opening hours are listed here.