Sassoon manuscripts on exhibition in Newcastle

Posted on 30 September 2014 by Special Collections

Several items from the library’s collection of the manuscripts of Siegfried Sassoon (1886-1967) are currently on display at the Hatton Gallery in Newcastle-upon-Tyne in an exhibition entitled Screaming Steel: Art, War and Trauma 1914-1918. The exhibition explores how artists and writers responded to their experience of warfare, particularly on the Western Front. Sassoon’s works are displayed alongside an early draft of Wilfred Owen’s Anthem for Doomed Youth, paintings by artists such as Paul Nash and George Grosz, and two haunting prints by Otto Dix from his cycle Der Krieg.

Among the Sassoon items chosen for display are drafts of his poems The Warmongers and Christ and the Soldier, and a fair copy of his powerful statement against the conduct of the war. Sassoon sent this ‘soldier’s declaration’ to his commanding officer in 1917, detailing his refusal to return to the front line. It begins:

I  am making this statement as an act of wilful defiance of military authority because I believe that the war is being deliberately prolonged by those who have the power to end it. 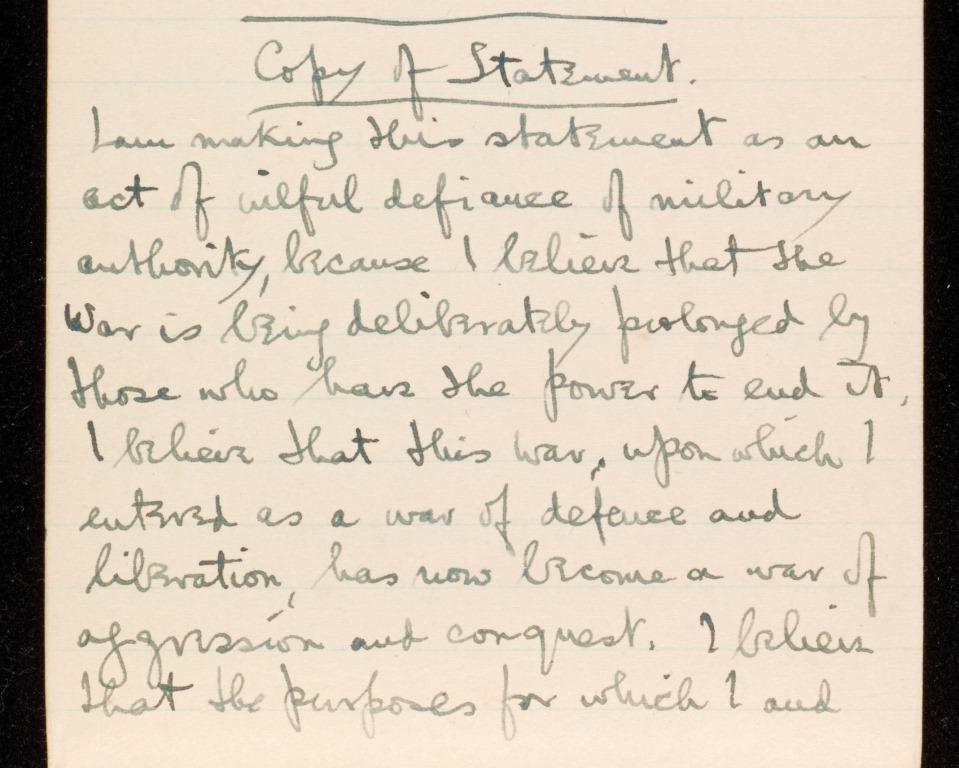 The statement was read out in the House of Commons and printed in the Times. Rather than being court-martialled, Sassoon was declared to be suffering from shellshock and ‘unfit for service’ so he was sent to Craiglockhart hospital where he met Owen. It was at Sassoon’s suggestion that the title of Owen’s poem was altered; in the draft on display, it bears its earlier title Anthem for Dead Youth.

The exhibition is free and runs until 13 December 2014. Sassoon’s journals can be seen online in Cambridge Digital Library.