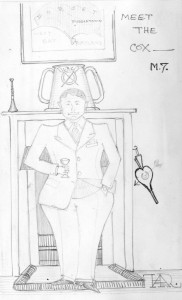 The RCS has just created an on-line catalogue for a fascinating recent acquisition, the papers and photographs of the geologist and mining engineer John Seymour Benson (1911-86).  Benson was a devoted correspondent with his family, and his letters home convey the experiences of a rich and varied life abroad, which began with school in Villeneuve, Switzerland, during 1928-30.  Benson studied Geology at Trinity Hall, Cambridge, during 1930-33, where he was an avid rower, and coached the college boat.  His letters include amusing sketches of the rowing team.  Immediately after leaving Cambridge, Benson participated in the Oxford University Expedition to the Arctic in 1933, which carried out a topographical and geological survey of an unknown district of North Spitsbergen.  Benson served as Assistant Geologist and Surveyor on B Sledge Party.  His letters and detailed diary describe his travel, colleagues, living conditions and work, which included the collection of meteorological data. 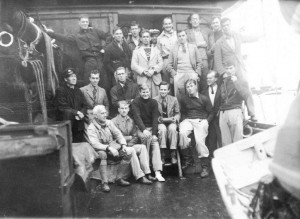 In 1934 Benson attended the School of Mines, Camborne, which involved working in a coal mine as a driller’s assistant.  He then embarked upon what would become a long and successful career in the African mining industry when he went to work as a gold prospector in Kenya and a diamond driller in Tanganyika.  His letters and a photograph album graphically depict the rigours of the life: difficult travel and long hours of work in remote locations, accommodation in tents or mud huts without electric light, at times with lions prowling outside.  There were limited personal comforts and diet. Tinned turkey to celebrate Christmas 1935 was a particular treat.   During the Second World War, Benson joined the Royal Engineers, and served in India with Queen Victoria’s Own Madras Sappers and Miners and then with the West African Engineers. A volume of letters recounts Benson’s experience training Indian soldiers and travels throughout the country. 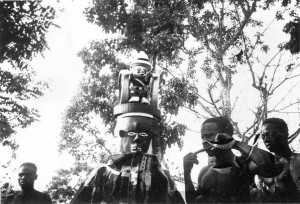 In 1947 Benson returned to Africa, prospecting in Nigeria.  He was interested in the African peoples he encountered during his work and travels.  One of the highlights of the collection is an album of photographs he created during this time, documenting the dress, dances and other customs of the people of the country’s southeastern region. From 1950 until the mid-1960s, Benson worked in the Gold Coast [Ghana] mining industry, when he joined the Ghana Geological Survey Department.

Benson’s detailed knowledge of diamond mining was reflected in his appointment from May 1970 as a Technical Assistance Officer to the Ghanaian Government under the Special Commonwealth African Assistance Plan.  Benson’s experience was not limited to Africa.  In 1955, during a tour of western and central Canada, he visited a number of mines, and kept a diary recording his observations on their management. 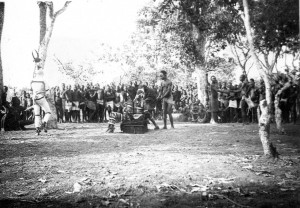 Benson’s many letters reflecting his great experience of the African mining industry as prospector, manager, executive and government advisor shed light upon many subjects including mining practices, company policies, working conditions and labour relations.  They will be an invaluable source for researchers working in economic history, development studies and other disciplines.

Benson’s letters neatly complement another recent acquisition, the archives of Ernest C. Lanning (RCMS 362), a colonial administrator who also worked as a gold and diamond prospector in the Gold Coast, Sierra Leone and Nigeria during 1935-39:

To view the on-line catalogue of the Benson collection, RCMS 364, please follow this link: