The Library’s latest exhibition Private Lives of Print: The use and abuse of books 1450-1550 is now open to the public. Over fifty incunabula are on display, selected for their copy-specific features ranging from glorious bindings to expunged texts, from elegant illuminations to crude doodles. The accompanying virtual exhibition adds several films, including curator introductions to the subject, a demonstration of the Library’s reproduction historical printing press, and rotating views of two of the most beautiful bindings. A selection of items is also available to view in full on Cambridge Digital Library. 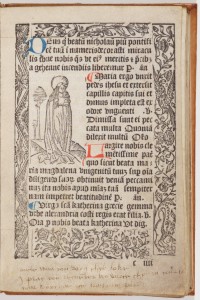 The exhibition marks the conclusion of the Library’s five-year project to create high-level online records for all of its more than 4,600 incunabula. These wonderful books were previously only accessible through a printed catalogue, and without all the details of provenance, annotations and condition which are of primary importance to many researchers. Instead of a straightforward exhibition showing the most beautiful books, this display is intended to give an insight into the ways in which users interacted with their books over the first hundred years of the printing press. Some of these books belonged to the great and the good, others to more humble owners, and all are of interest to researchers; when printing first spread across Europe, who owned books, and what did they do with then? Some early book-buyers left the pages of their books completely clean, while others covered nearly every available blank space with explanatory notes or doodles. One notable young owner, sixteen-year-old Sisto Medici, left all the text pages of his copy of the Hypnerotomachia Poliphili untouched, writing only on the title page; a poem inspired by the text of the Hypnerotomachia. We are delighted to be able to include in the exhibition another poem inspired by this book, an interpretation of the text by Poet Laureate Carol Ann Duffy. This poem is published for the first time in the Library’s new publication Emprynted in this manere: Early printed treasures from Cambridge University Library (more details below). 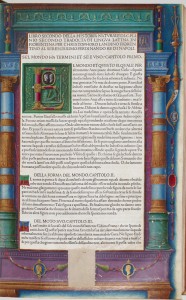 Perhaps the most typically beautiful incunabula are those with illuminated illustrations, following the style of manuscripts and often decorated by the same skilled workmen as manuscripts, in much greater numbers. In the same way, the binders who had previously bound manuscripts for monastic, noble and private owners had to develop techniques for binding the much larger output of the printing press. The exhibition includes a variety of different styles of decorated binding, and one book which has survived for 500 years with its simple wrapper only loosely attached.

The accompanying virtual exhibition includes selected additional items for which there was not space in the display cases. There is also an introductory discussion of the exhibition by lead curator Ed Potten and Research Associate Laura Nuvoloni; a demonstration of the replica historical printing press in the Library’s Morison Historical Printing Room; and a selection of other multi-media features including songs and rotating films of selected items. Twelve of the items on display, and an additional three which were too good to miss, have been fully digitised and added to the Exhibitions collection of Cambridge Digital Library. These range from single-sheet broadside fragments to a stunningly illuminated 1491 Books of Hours, as well as books with particular stories of their owners; a charming set of Meditations on the life of Christ annotated by two sixteenth-century nuns, and a medical dictionary belonging to several successive medical students, who added occasional debates over the correct interpretations of a Latin term.

Around twenty of the items in the exhibition also feature in the Library’s most recent publication, Emprynted in this manere: Early printed treasures from Cambridge University Library. Sixty invited authors each wrote on an item that fascinated them, with art historians alongside scientists, library curators alongside typographers, and notable celebrity authors including Sir David Attenborough, Sir Quentin Blake, Bamber Gascoigne, and Poet Laureate Carol Ann Duffy. The catalogue includes over two hundred newly commissioned photographs and is available to purchase for £10 from the University Library. 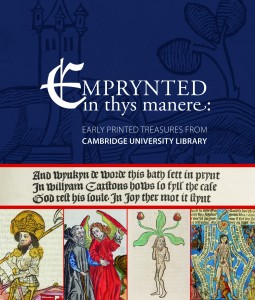