A significant part of rare books cataloguing work is documenting ‘copy-specific’ information—previous ownerships, binding, decoration, or imperfections—about the book in hand. Identifying and describing this information is usually very interesting, but it isn’t always straightforward.

A recent Library acquisition has tested our detective powers to the full. Le ciel des philosophes, ou sont contenus les secretz de nature, et comme l’homme se peult tenir en santé is the first French edition (1546) of Philipp Ulstad’s Latin work on alchemy and distillation first published in 1525. As with many early printed books it shows multiple ownership marks, but unlike in many books these marks can only be seen if you look very closely.

The last leaf of the book is noticeably thicker and stiffer than the others, and shows on the recto faint evidence of an inscription on the reverse. 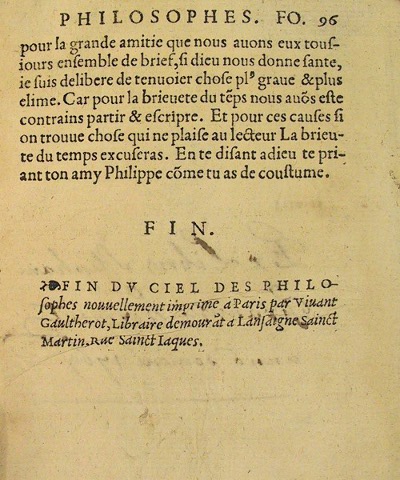 When you turn over the leaf, however, no inscription is seen. 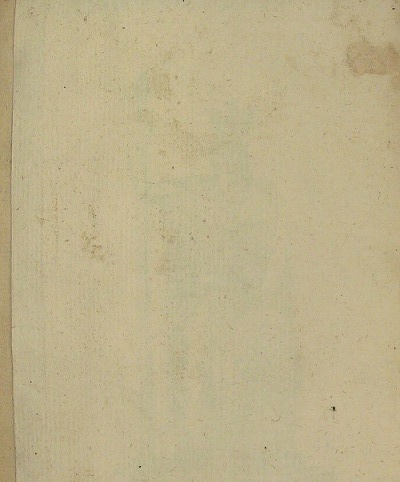 If we place a light source beneath the leaf and view from the verso, a ghostly apparition appears. This is not the inscription, but a twentieth-century bookplate which has been hidden, presumably deliberately, by a later owner. ‘Ex Libris Marc König’ is written on the pedestal on which stands a woman with spear and shield. A later owner has left their mark by pasting an existing flyleaf (the book retains a sixteenth-century binding) over the bookplate to conceal it. We haven’t been able to identify Marc König: if anyone recognises the bookplate, do please let us know.

However, when we place the light on the other side of the leaf and view from the recto, we see traces of the bookplate image, but also a clearer view of the original inscription, back-to-front and partially obscured by the colophon of the book. The inscription was clearly written on the verso of this leaf, and then covered over by the later bookplate. The date visible in this inscription, 1769, and the style of handwriting both support this idea. Ironically, the bookplate that obscures the inscription was itself also later covered over. 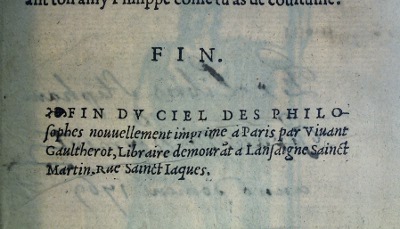 Sadly, it is difficult to make out the complete inscription, and the most interesting part–the surname–is the most heavily obscured. The picture below shows the clearest view that we have managed to create. Our best guess at what is written is “Ex Libris Stephani / Fransisci Lovment / anno domini 1769”. Any suggestions for improvements to this reading would be gratefully received!