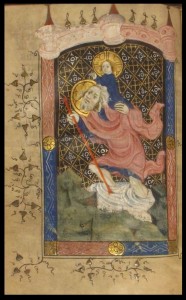 The current exhibition in the entrance hall, Scribes and Printers, features recent acquisitions by the Departments of Manuscripts and Rare Books. This post showcases the manuscripts and a further post will describe the early printed books. The three manuscripts acquired are all Books of Hours and between them illustrate some of the most distinctive features of this enormously popular genre.

Tens of thousands of Books of Hours survive from all corners of Europe, ranging from the modest and even scruffy to the lavish and de luxe. They are personal and portable and, as the name suggests, were intended to be used several times a day.

The format developed in the thirteenth century as a shortened, simplified version of the liturgical offices used by the clergy but specifically intended for the laity. The production of Books of Hours responded to a growing demand from literate lay people, both men and women, for devotional material for personal use. They also served as indicators of both piety and wealth.

MS Add. 10060, purchased with the assistance of the ACE/V&A Purchase Grant Fund, can be dated c. 1390-1400. Although it was made in Bruges, the calendar and prayers are for Sarum Use, clearly indicating that it was intended for export to England. It is one of the earliest examples of what became a flourishing commercial trade. Such manuscripts were often mass-produced with teams of artists producing full-page miniatures on single leaves for incorporation into finished volumes. 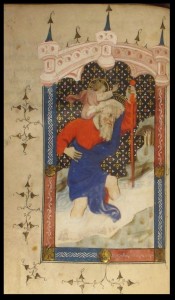 The miniatures in MS Add. 10060 share the same distinctive style as another manuscript which has been in the collection at CUL since the 18th century, MS Ii.6.2; the frames of each incorporate a pink turreted baldachin or canopy. The two are exhibited next to each other so that their stylistic features can be compared. Both these Books of Hours contain numerous traces of their use and ownership which offer a valuable insight into the domestic and interior lives of their medieval and early modern owners. There are notes on family events – births, deaths, marriages – as well as additional prayers, devotions, poems, charms and recipes on the blank pages in both Latin and English. The additional texts in MS Ii.6.2 are the subject of a chapter in Professor Eamon Duffy’s Marking the Hours: English People and their Prayers 1240-1570 (Yale University Press, 2006).

Several of the annotations in these two Sarum Books of Hours are dated in the 1550s and 1560s, showing that these books were passed on and used, even if only to record family information, after the Reformation. With the invention of printing, Books of Hours could be produced even more cheaply and found a wider audience still – but the other two manuscripts on display testify to a continuing demand for manuscript versions in the late fifteenth and early sixteenth centuries. 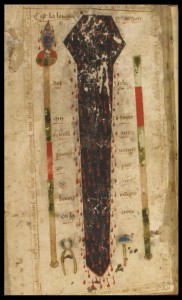 MS Add. 10076 is an early 16th century Book of Hours produced in Rouen. It contains no miniatures but many of the pages are decorated with elaborate grisaille borders, where the decorative effect is achieved through the use of tones of grey on a gold background. This manuscript also contains additional prayers in French and an intriguing illustration on a paper leaf has been pasted onto the inside cover. It depicts one of the nails used in the Crucifixion dripping with blood. The image is said to be actual size and was intended as a stimulus for devotional meditation.

In contrast to the French and English examples, our new Dutch Book of Hours, MS Add. 10061, contains no marks of ownership or use. It was produced in the 1480s in Haarlem and, as is common for Dutch Books of Hours, is written in the vernacular rather than in Latin. Its high quality parchment leaves contain numerous elaborate penwork initials and flourishing in red, blue and green ink. 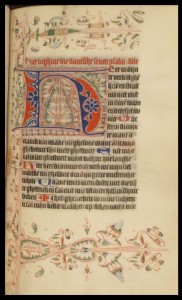 The manuscripts will be on display in the entrance hall until 6 December and the pages will be turned on 24 November to exhibit different openings and to minimise light exposure.

Images from several of the library’s Books of Hours are featured on Christmas cards, now available from the Reader Services desk in the entrance hall.