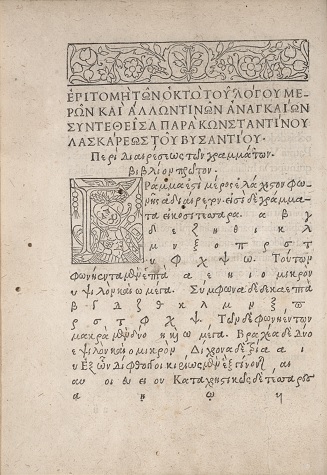 The 500th anniversary of Aldus Manutius’s death on 6 February 1515 (Incunabula Project Blog) is celebrated this year by libraries and institutions all over the world. Cambridge University Library joins in with a small exhibition of books published by Manutius between 1495 and 1515 (plus a couple of others) on display in the library Entrance Hall, from Monday 6 February to Saturday 7 March 2015, with an enlarged online version available at https://exhibitions.lib.cam.ac.uk/manutius.

Drawn from the library holdings of incunabula and early sixteenth-century Aldine editions, the exhibition celebrates Aldus’s achievements as the most successful editor, printer and businessman in Renaissance Italy. The individual history of some of these books also illustrates his importance as a highly respected humanist, scholar, linguistic and grammarian who could converse at equal level with humanists of the stature of Pietro Bembo and Erasmus of Rotterdam.