The library of Gabriel Harvey 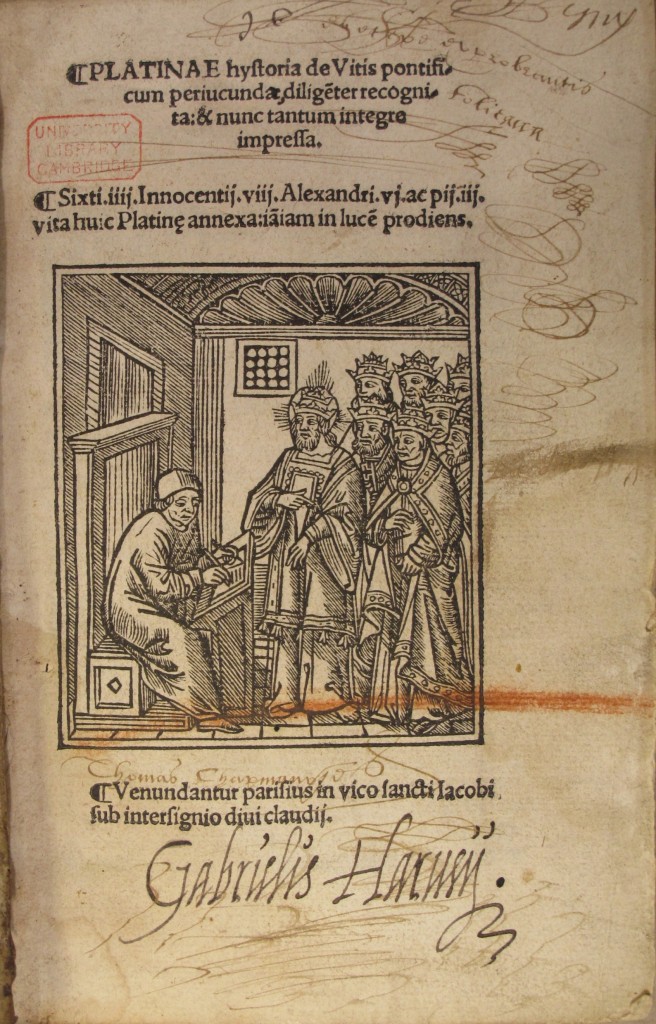 Discoveries are made frequently in libraries, and the University Library is no exception. Staff and readers alike may call up a volume which has been part of the Library’s collections for centuries and, though they might be interested primarily in its text, they may also notice some previously ignored or long-forgotten inscription, bookplate or binding tool. These marks of ownership can tell us much about the ways in which people used their books, from lowly undergraduates in sixteenth-century Cambridge to lofty nineteenth-century book-collectors on the continent. Unfortunately, the excitement of finding something new is often tempered by the cold light of day; the realisation that someone has seen and recorded it already. One recent discovery, made by researcher Dr Kate Isard and me as we searched for sixteenth-century books with interesting visual marginalia, was thought at first glance to be a hitherto unrecorded book from the library of the English writer Gabriel Harvey (c. 1552/3—1631). But the excitement dissipated when it (a 1570 Cologne edition of Cicero) turned out to have been recorded before, in a 1979 study of Harvey. However, as the Library owns two further books from Harvey’s library, this seems like a good time to bring them all together and to think a little about this once impressive but now dispersed collection. 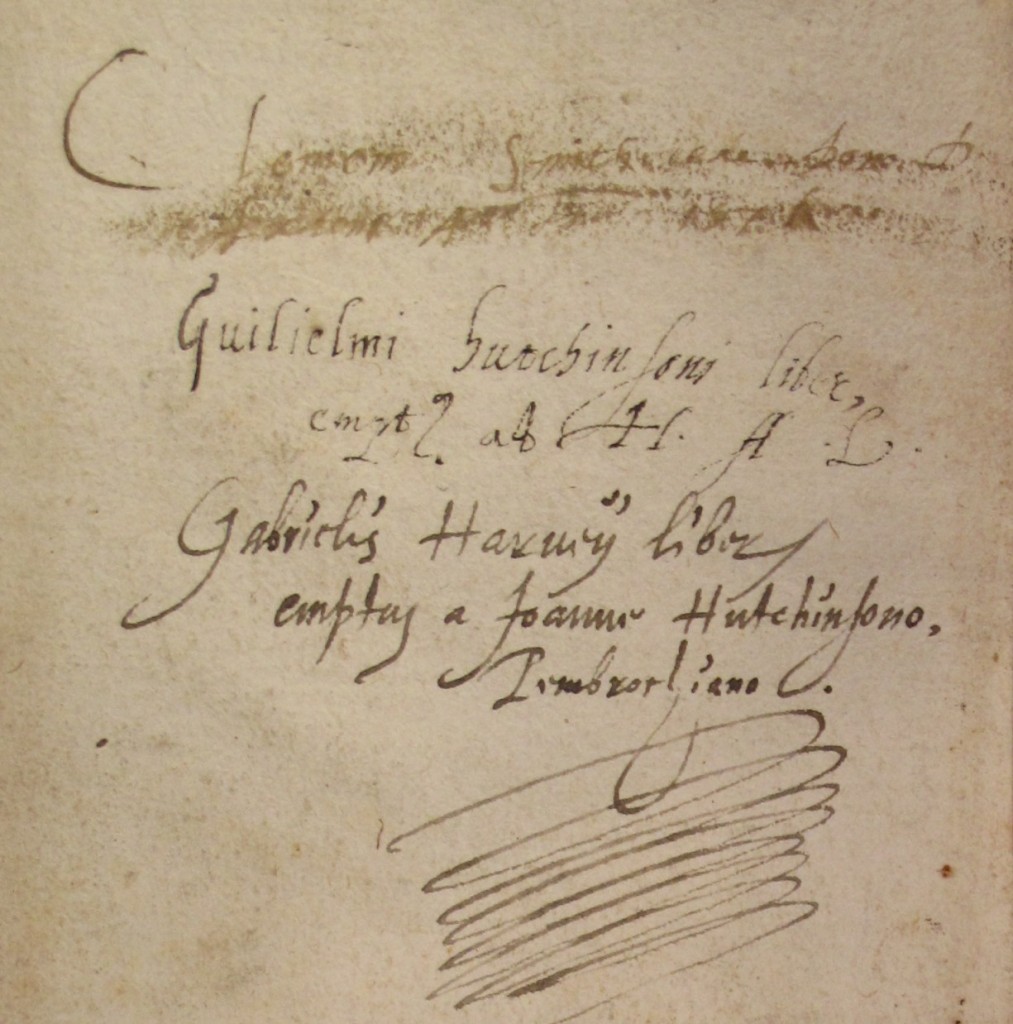 Harvey’s (and other former owners’) inscriptions in Platina’s Hystoria (Rel.d.50.2)

Gabriel Harvey (c. 1552/3—1631) was born in Saffron Walden (about fifteen miles SW of Cambridge) and studied at Cambridge in the 1560s and 1570s, matriculating as a pensioner at Christ’s College in Easter term 1566, taking his BA in 1569/70 and serving as a fellow of Pembroke from 1570 (from where he took his MA in 1573). In 1578 he became a fellow of Trinity Hall, having decided to take up the study of the law, and took an LLB there in 1585. In the same year he was elected Master, only to have the offer withdrawn, on the suggestion of the Vice-Chancellor Andrew Perne, after a disagreement between the pair in 1577. This concerned Harvey’s ownership of precious books from the library of his mentor, Sir Thomas Smith of Saffron Walden (who got Harvey his fellowship at Pembroke in 1570), which had been coveted by Perne himself but were presented by Smith’s widow to Harvey.

Harvey’s life seems to have been beset by controversy; at Pembroke in 1573 his admission as a Master of Arts was blocked by a group of fellows headed by the future Dean of Canterbury and Master of Trinity, Thomas Nevile, who objected to his arrogant and unsociable demeanour, and for many years Harvey traded blows in a pamphlet war with the poet and satirist Thomas Nashe, fifteen years his junior, who was admitted a sizar at St John’s in October 1582. This eventful life was evidently a productive one, both in terms of literary output and friendships. He published several works, including his Cambridge orations, given 1574-76 and published as Rhetor and Ciceronianus in 1577 (the latter held that oratorical style – like Cicero’s – must come from a broad understanding of all fields of knowledge), a tribute to his deceased patron Sir Thomas Smith (Smithus; vel Musarum lachrymæ, of 1578) and a volume of Latin verse (Gratulatio Valdinensis, 1578) which had been presented in manuscript form to Elizabeth I and her courtiers at Audley End in July that year. He was a friend of Edmund Spenser, also at Pembroke, and appeared as Colin Clout’s “especiall good freend Hobbinol” in Spenser’s The Shephearde’s Calender. 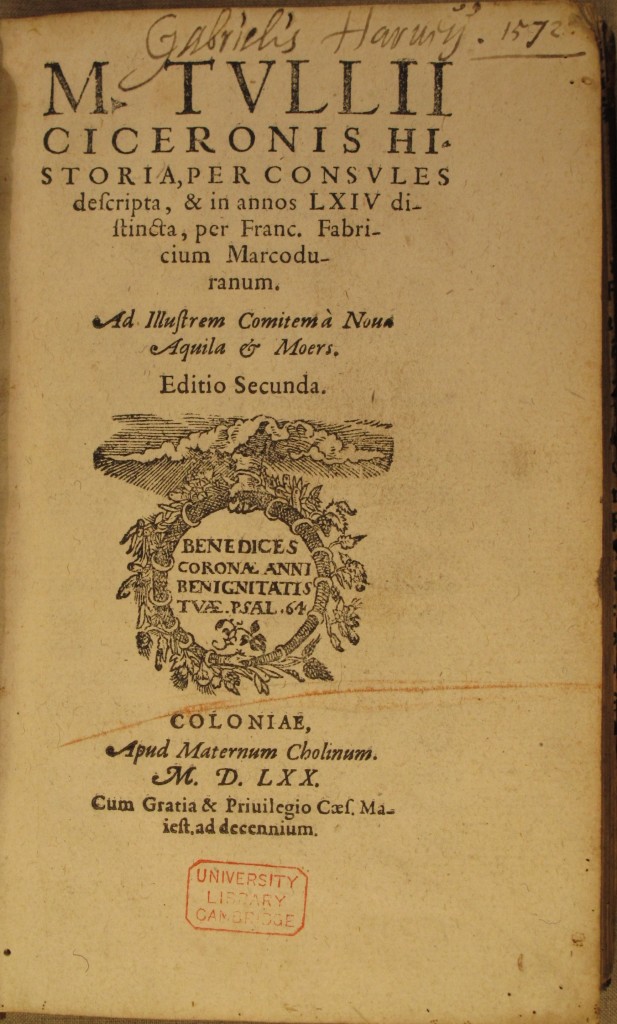 A study of Harvey’s library was published by Virginia Stern in 1979. It records about 180 titles, printed between the end of the fifteenth century and the 1620s, which are known (either from surviving copies or Harvey’s notes) to have been in his possession. Some of these books survive in libraries (both public and private), but Harvey’s ownership of certain books was inferred from his notes referring to his copies which no longer survive. About fifteen of Harvey’s books survive in Cambridge libraries, including the college libraries at Trinity, St John’s, Pembroke, Magdalene and Emmanuel. The University Library holds three books inscribed by Harvey: [1] Platina: Platinae hystoria de vitis pontificum (Paris, 1505; Rel.d.50.2), [2] Valerius: Dictorum factorúmque memorabilium (Paris, 1544/45; Adv.d.8.1) and [3] Franz Fabricius: M. Tulli Ciceronis historia (Cologne, 1570; F157.d.1.1).

Curiously, all three volumes came from the library of the University Librarian Francis Jenkinson; the Platina and Fabricius he presented in 1917 and the Valerius Maximus came after his death in 1923. It is not known if he acquired them for their connection to Harvey, but Jenkinson presented many early printed books during his long librarianship (1889-1923) and left many more at his death. All three volumes retain their sixteenth-century leather bindings. The Cicero is the least elaborate of the three, with a blind-tooled oval centrepiece of arabesque patterns to both boards. The endpapers have been recycled from a 1480 Speyer edition of Petrus de Aquila’s Quaestiones super quattuor libros Sententiarum Petri Lombardi (ISTC ip00446000), of which only one copy is known in the UK (at the BL); the Sentences of Peter Lombard were a prime target for destruction during and immediately following the Reformation, which may account for the book’s rarity in this county. The textblock is strengthened with strips of parchment cut from what was probably a fifteenth-century manuscript, similarly discarded in the first half of the sixteenth century. Harvey has inscribed his name and date of acquisition at the head of the title page: “Gabrielis Harveii, 1572”. There are no textual annotations within the volume but the line in red chalk across the title page may be Harvey’s. 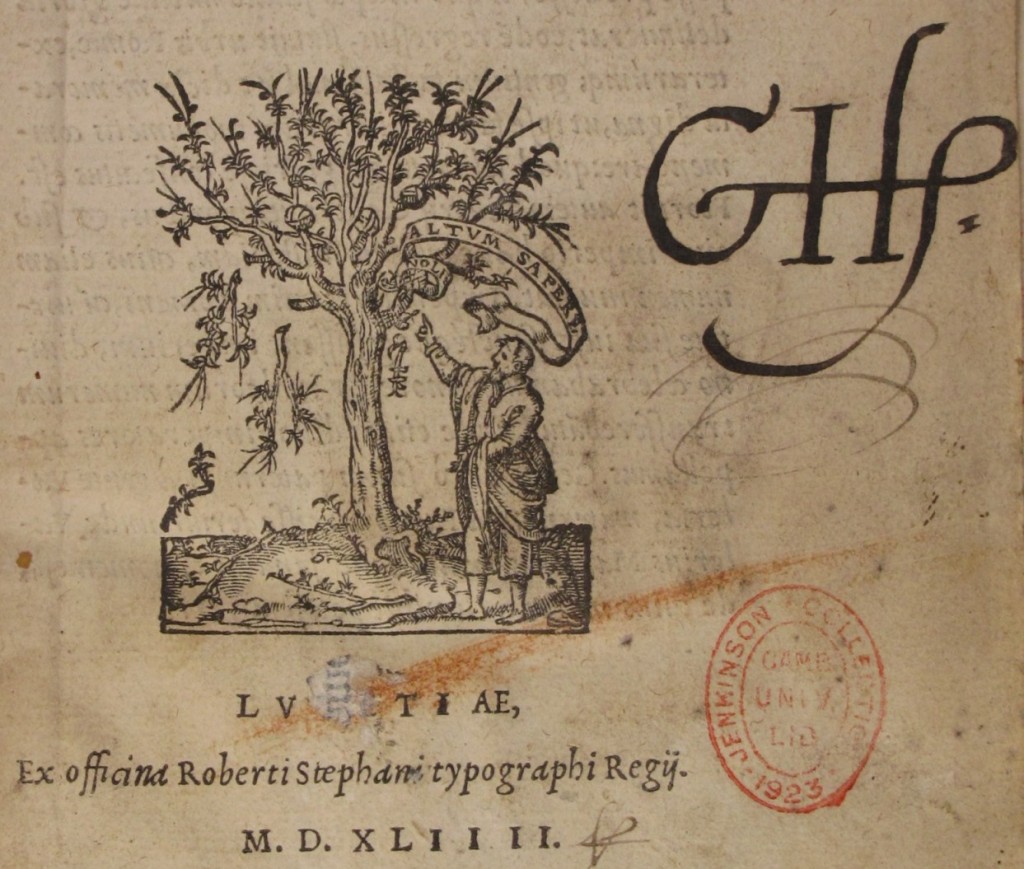 Harvey’s initials on the title page of Valerius (Adv.d.8.1)

The Valerius Maximus has been rebacked, but in this case the oval centrepiece on both boards is tooled in gold. As with the Cicero, the endpapers have been recycled from an unwanted printed book, in this case Robert Gaguin’s Compendium…super Francorum gestis (Paris, 1500). Harvey has inscribed the head of the title page “Gabrielis Harveii” and added a flamboyant set of initials. The annotation below the title appears to be Harvey’s and the volume contains many notes in the same hand. 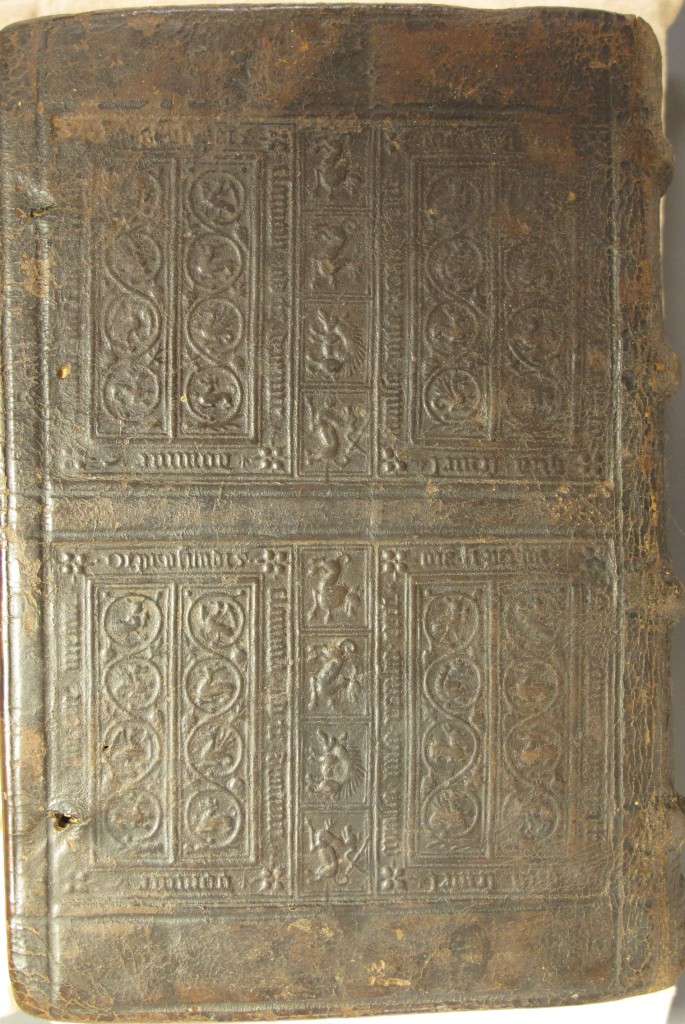 The binding of the Platina – a history of the popes – is the most interesting of the three, each board being decorated with two rectangular blind-stamped panels comprised of floral patterns and animals, surrounded by text. This is probably contemporary with the date of the work (1505) and represents a very early style of binding. One of the two front endpapers are from a manuscript, probably fifteenth century and the volume was once tied shut with silk. In addition to having the most interesting binding, this volume also has the most interesting ownership history, at least, it is the only one which can be traced before it came into Harvey’s hands. On the front endpaper facing the title are three Latin inscriptions. The first is largely obliterated, but begins with the name “Clemens Smith”, presumably the Clement Smith who matriculated at Queens’ College in 1572 and was a fellow of the college from 1576 until his death in 1611 and rector of St Botolph’s church in Cambridge 1581-4. The next inscription – “Guilelmi Hutchinsoni liber, emptus ab. H.A.L.” – tells us that the volume went later to William Hutchinson, who got it from one “H. A. L.”, perhaps the individual whose name has been obliterated from the second line of Clement Smith’s inscription. This William Hutchinson, who entered Queens’ in 1568 and went on to become Chaplain to the Bishop of London and a Prebendary of St Paul’s Cathedral, was the brother of John Hutchinson of Pembroke College, from whom Harvey acquired it; this we know from the third inscription, which reads “Gabrielis Harveii liber emptus a Joanne Hutchinsono, Pembrokiano”. John Hutchinson matriculated at Pembroke in the same year his brother entered Queens’, taking his BA in 1572/3 and MA in 1576. He was a fellow of the college from 1574 but was incorporated at Oxford in 1581 and served, from 1582, as a clergyman in Norfolk. If John left Cambridge in 1581 and moved to Oxford, the volume would seem to have passed to Harvey – a fellow at Pembroke 1570-1578 – in or before 1581. Finally, Harvey has proudly inscribed his name upon the title page. His annotations to this volume – a history of the popes – are confined primarily to underlining and occasional dashes or stars in the margins, but on both sides of a blank leaf two thirds of the way into the book he has made a lengthy alphabetical index of the page references for each pope.

This little group of Harvey’s books is an important survival and has recently been examined by a member of the ‘Centre for Editing Lives & Letters‘ project at UCL, which has already produced a digital facsimile of another of Harvey’s books (a 1555 Livy), available online here. 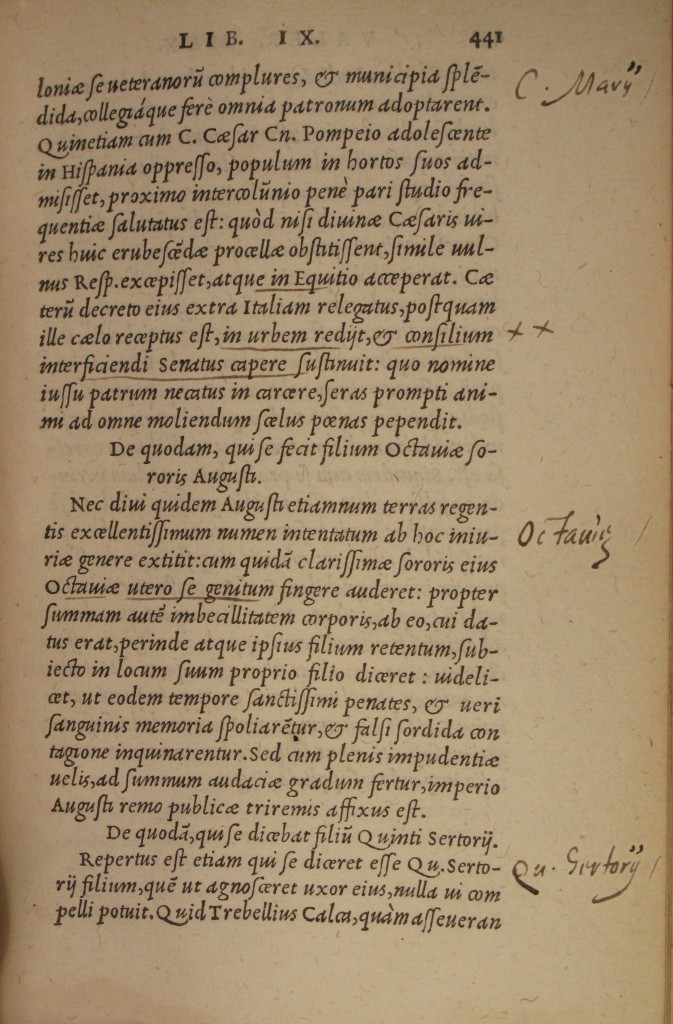