On 31 March 1685 was born Johann Sebastian Bach, widely regarded as one of best composers the world has ever known. The Library is fortunate to have in its collections a volume of organ music once in the great man’s possession, and today – his 330th birthday – seems as good a day as any to share it with the world. 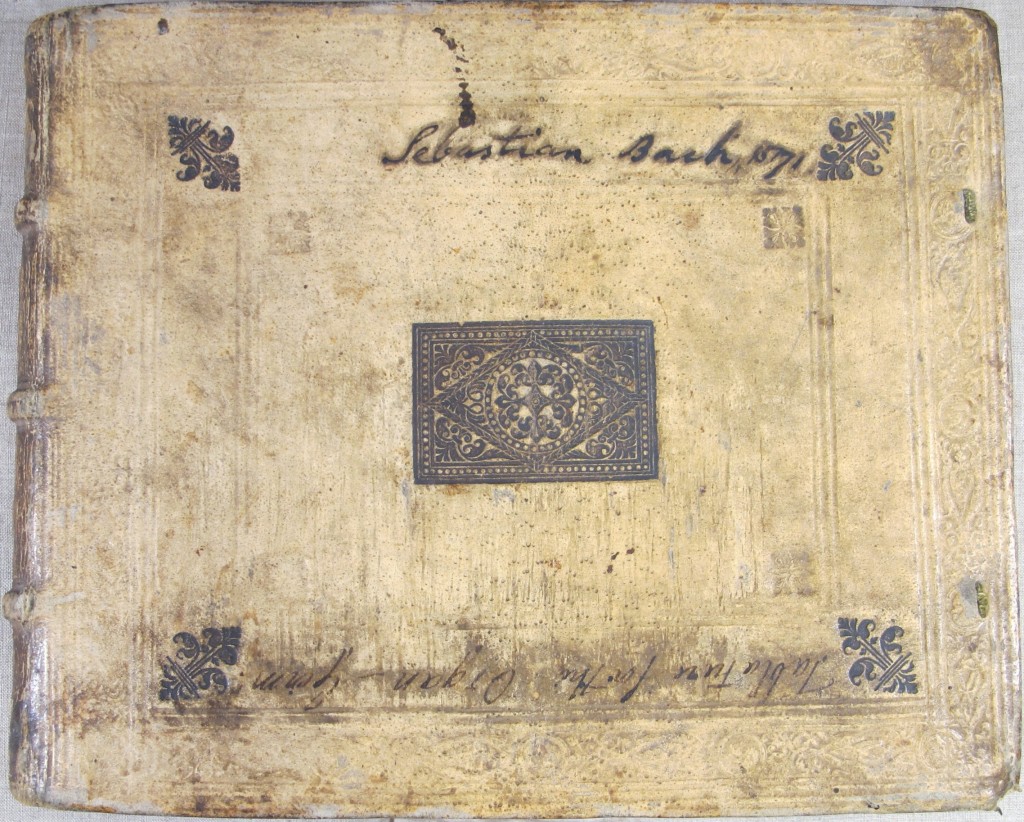 The book in question is a copy of Elias Ammerbach’s Orgel oder Instrument Tabulatur, printed in Leipzig in 1571. Ammerbach (c. 1530-1597) was educated at Leipzig (1548-1549) and probably spent the rest of his life as Organist at the city’s Thomaskirche. An anthology of transcriptions for organ or clavier, the work contains several early German songs not found in any other sources and, though it is not known if he composed works himself, he developed a new method of musical notation – tablature – for keyboard playing, known as ‘new German organ tablature’. Arrangements of works by well-known composers, including Orlande de Lassus and Josquin des Prez, were printed in his tablature. Of this 1571 first edition only two copies are recorded in UK libraries: this copy at Cambridge and another (lacking two leaves) at the British Library (which may also have some connection to Bach).

Bach himself worked in Leipzig for much of his life, serving as Cantor at the prestigious Thomasschule – in addition to directing music at the city’s four principal churches and during official city functions – from 1723 until his death in 1750. Unfortunately Bach did not date his acquisition of the book, but it is likely that he acquired it during his time in Leipzig. He did inscribe his name on the title page, however, with an elegant monogram for his initials and the first letter of his surname. 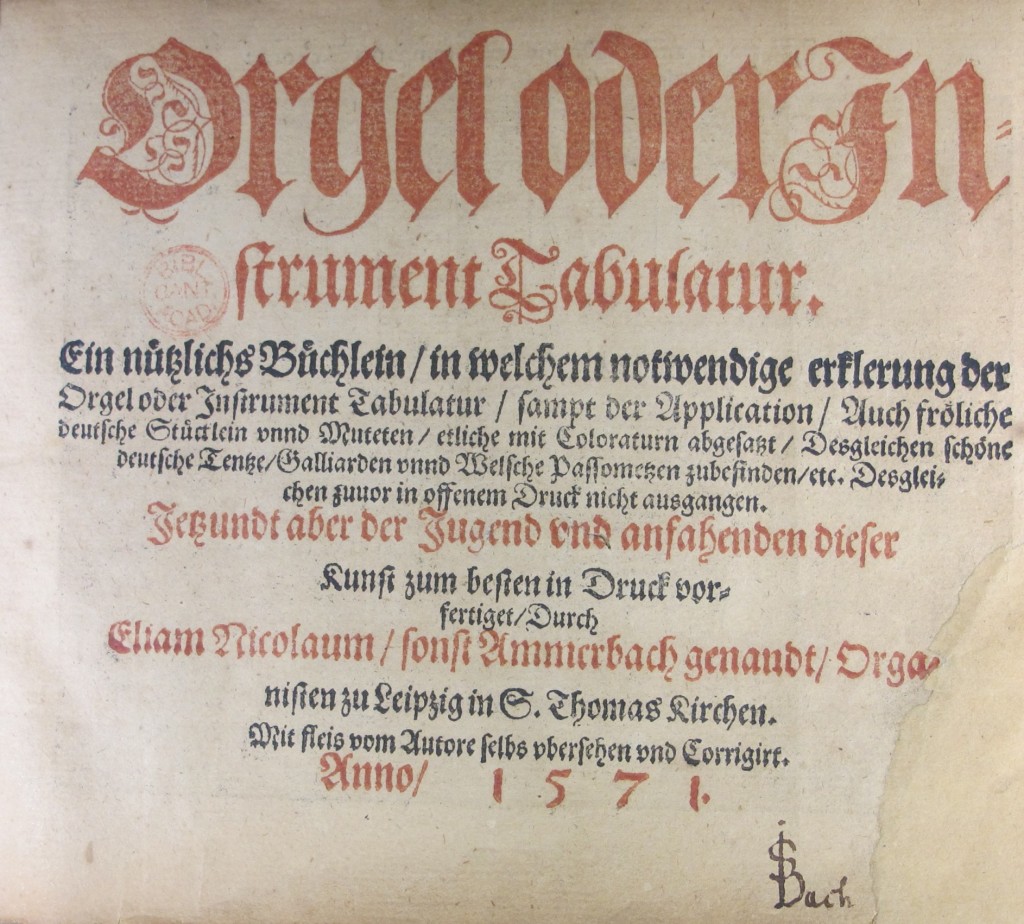 Bach’s inscription to the title page

The book’s distinguished provenance continued after Bach’s death, passing to his second surviving son C. P. E. Bach (1714-1788). We know this thanks to a very helpful inscription on the front endpaper, made by the musicologist Charles Burney (1726-1814), who acquired the book from C. P. E. Bach. The inscription reads:

Burney’s inscription to the front endpaper

A 1957 article by Stanley Godman (“Bach’s copies of Ammerbach’s ‘Orgel oder instrument tabulatur’ (1571)”), in Music & Letters (vol. 38, pp. 21-27), provides further information on Burney’s acquisition of books formerly in Bach’s possession and on the route the Cambridge copy took once it left Burney’s possession. Godman notes that on his 1772 visit to Hamburg Burney was presented, by C. P. E. Bach, with “three or four curious ancient books and treatises out of his father’s collection” and that C. P. E. would happily part with more “if [Burney] would only acquaint him by letter with [his] wants.” Only one other book acquired in this way by Burney appears to survive: a 1538 edition of the Hymn-Book of the Moravian Brethren now in Glasgow University Library, the only known copy.

Evidence furnished by George de Fraine of Cambridge University Library to Godman in 1957 records the later ownership history of the volume. Burney died in 1814 and his library was sold by Leigh & Sotheby on 9 June (and eight following days) that year, though this volume appears not to have been included in the sale (a copy of the catalogue is in the Library’s collection at Munby.c.163[7]). Mr de Fraine noted that it later belonged to Johann Baptist Cramer (1771-1858), a musician of German descent who spent most of his life in London, the Welsh harpist Edward Jones (1752-1824), who was patronised by Burney, and a London bookseller by the name of Longman, who published some of Jones’ works. Finally the volume was acquired by Rev. Robert Willis (1800-1875), Professor of Natural Philosophy at Cambridge, on whose death it was purchased by the Library. 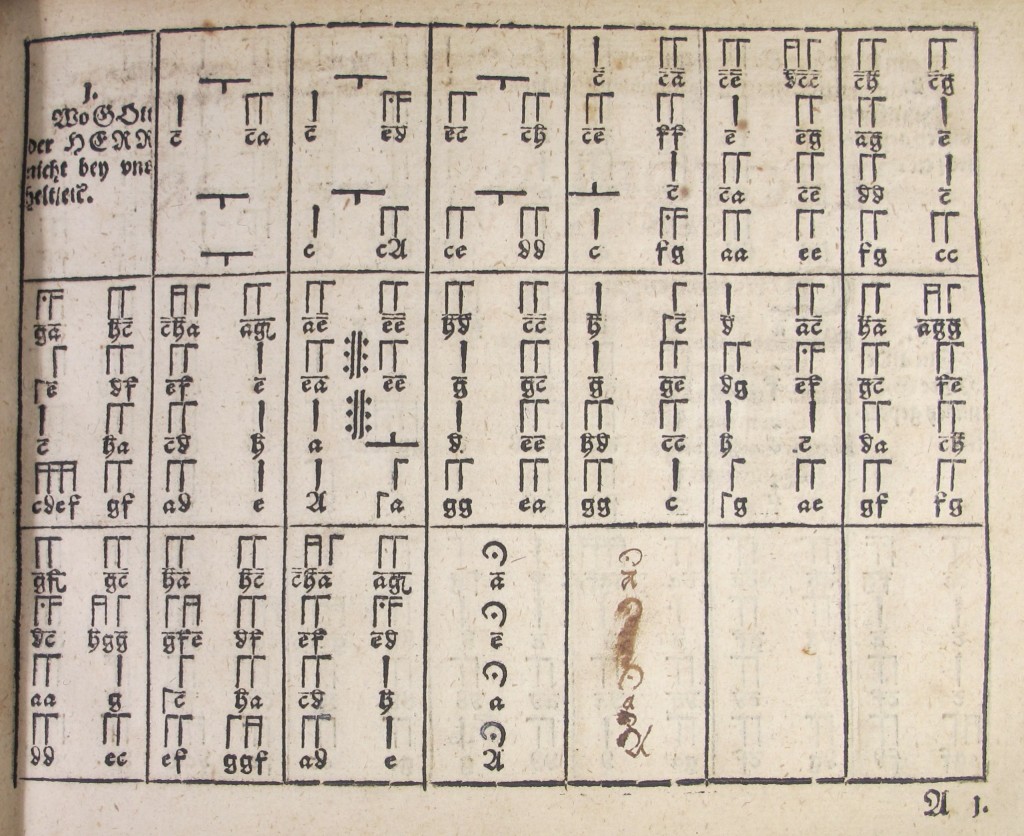 Annotation, possibly in Bach’s hand, to the text