Posted on 7 April 2015 by Special Collections

The Library recently acquired a collection of about fifty wholly engraved books, that is books in which both text and illustration are printed from intaglio plates rather than from movable type. These books are now fully catalogued and available to readers in the Rare Books Room at class CCA-E.66. There are about 50 books in the collection, printed between 1630 and 1830, a small selection of which are currently (until 9 May) exhibited in the Library’s Entrance Hall display cases. These show the range of subject matter – devotional works, arithmetic, architecture, poetry, music and anatomy – as well as the variety of size, shape and quality of these books, a number of which are in fine gold-tooled bindings. The collection was formed by the bookseller Roger Gaskell, who has kindly written this post. 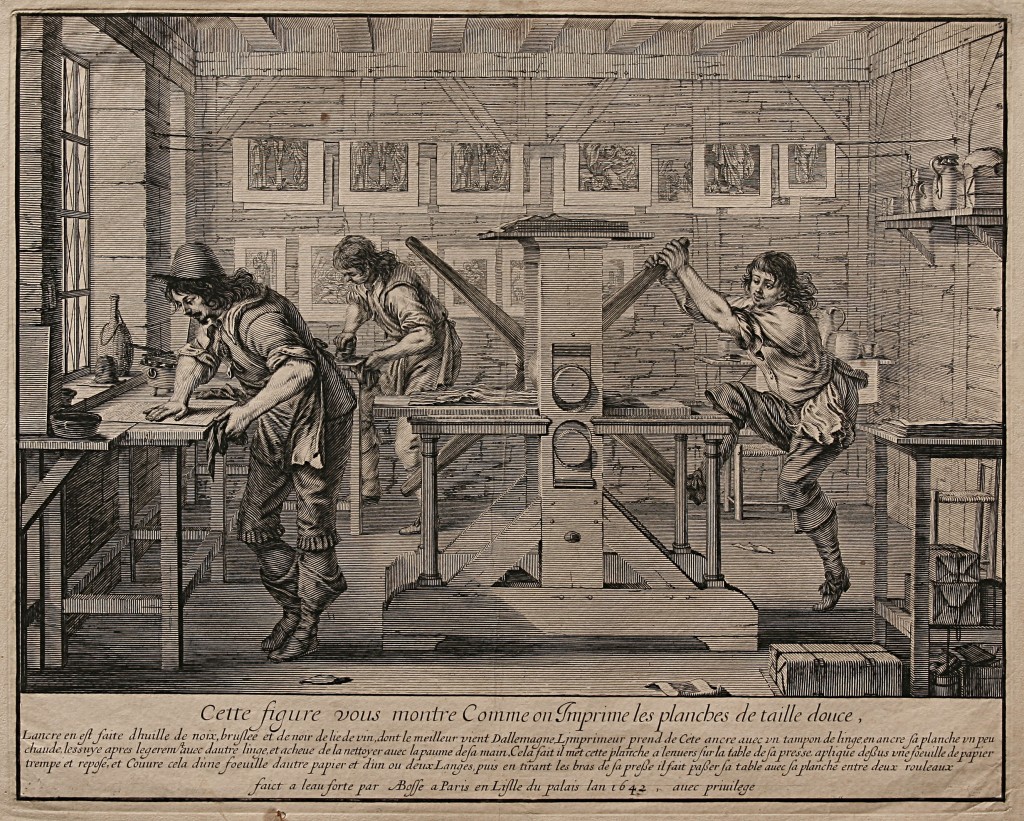 Three workmen inking (at the back), wiping (to the left) and pulling an impression from an intaglio (Abraham Bosse, 1642)

When we think of printed books we think of printing from movable type, the invention attributed to Johannes Gutenberg in the fifteenth century. However, it is not necessary for printing to be executed with movable type: the printing surface can be made by other means. Pictures, of course, can be printed too and the technologies for printing pictures can be used to print text. Examples of this are the Biblia pauperum block books in which large images are combined with text, all cut on a single woodblock and either printed by rubbing the paper by hand on the inked block, or on a printing press. Woodcut, like printing from type, is a relief process, that is the raised surface is inked and pressed into the paper, the cut away areas producing the white space. The only other technology for printing pictures before the invention of planographic printing (lithography) at the end of the eighteenth century was engraving or intaglio printing. Once again, words could be printed this way as well as images. Unlike the block books, which originated at around the same time as printing with movable type in the 1450s, engraved books are not known until the second half of the sixteenth century, even though printing from engraved plates was well known in the fifteenth century. 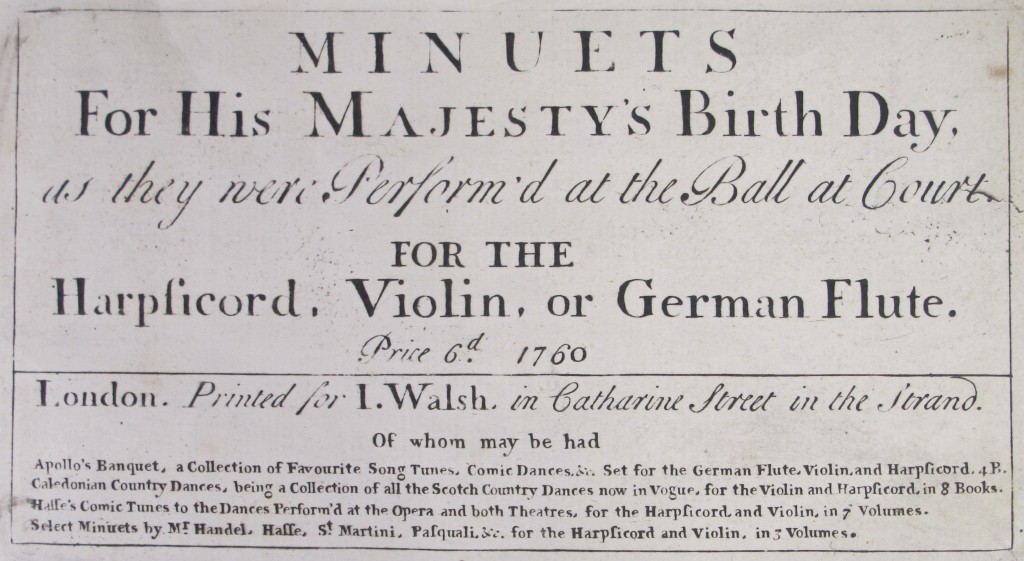 Printing from engraved plates is different from printing from type or other raised surfaces. In the intaglio process, the lines of the image or the letters of the text are cut into the surface of a thin sheet of metal, usually copper (the process is often called copperplate printing). 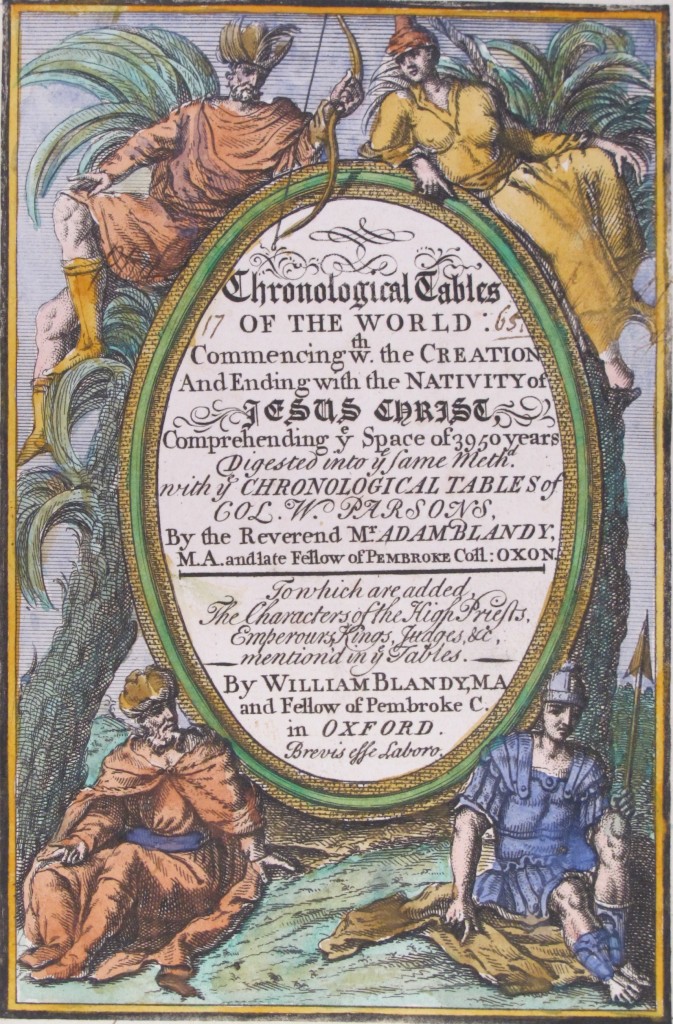 The grooves that hold the ink can be made in various ways, most commonly with a graver or burin of hardened steel, or etched with acid after first scratching the lines through a layer of varnish. Lettering on early engraved maps was often produced with hardened steel punches and later, punches were used for musical notation. Intaglio plates have to be printed on rolling presses in which the plate and the paper pass between two rollers. This press is designed to exert very much more pressure than a flat platen on the common press. The pressure exerted by the common press is nowhere near great enough to transfer the ink from the incised metal plate to dampened paper. Squeezed tight between two rollers, the dampened paper is pressed down into the grooves of the etched or engraved plate. Printing engraved plates on a rolling press is very much slower than printing type and woodcuts on a common press. The great majority of books with engraved illustration are made by combining the two technologies, either printing the engravings into spaces left for them in the text – the letterpress first and then the engravings – or by printing the illustrations separately and bringing them together with the text before binding. Engraving the text on the metal plate along with the illustrations avoids these slightly awkward manoeuvres and gives much more freedom to the designer. The organisation of the job is also much simpler as letterpress printing and intaglio printing were separate trades, only rarely carried on in the same workshop. 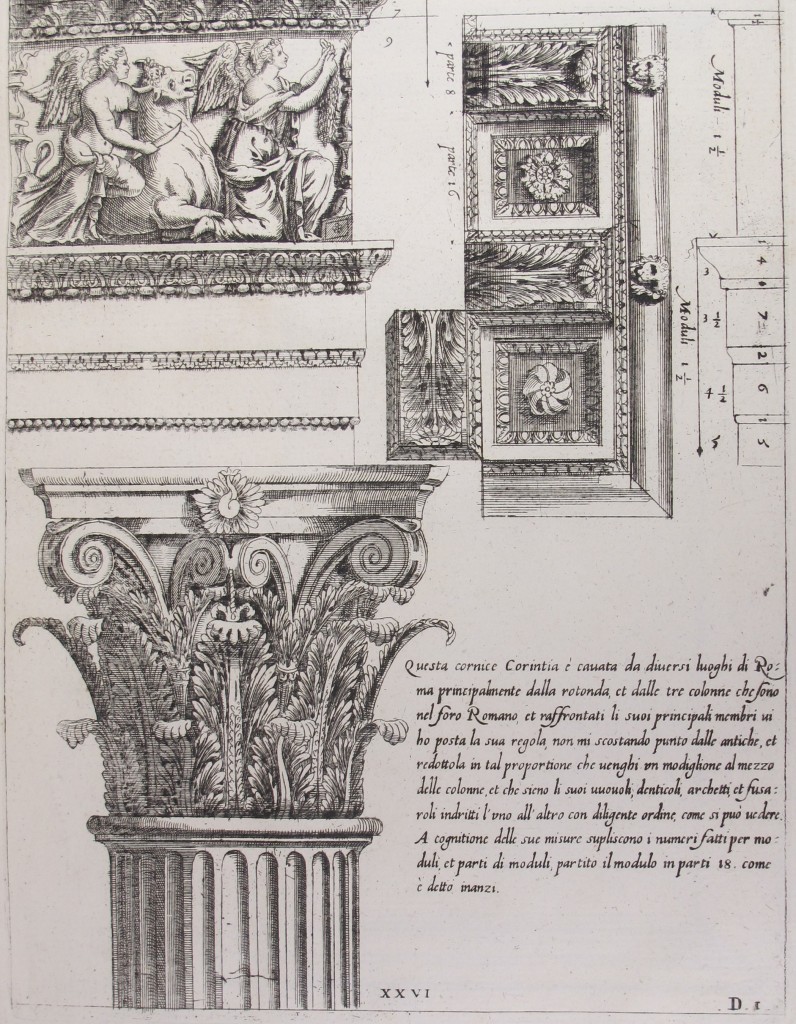 One of the earliest and certainly one of the most spectacular engraved books is Jacopo Barozzi da Vignola’s Regola delli cinque ordini d’architettura printed at Rome in 1562, a large format book around 40cm (16in) tall in which three dimensional architectural details, measured diagrams and text are combined in a way that would have been impossible if the text had been set in type. It is the combination of figurative and diagrammatic images, verbal text and numbers that made the work an obvious candidate for a fully engraved book, while its practical value for architects and builders made it one of the most reprinted and copied of all engraved books, both in large format editions and in small pocket editions. The large format editions of Vignola exhibit one of the ways in which the technology of engraving serves the purpose of the book and its audience, in this case highly detailed illustrations, intended for show as well as information, closely integrated with text. The extraordinary range of engraved books makes clear that there are many other motivations, only some of which were discussed in the pioneering study by Gabriel Peignot published in 1810 (Répertoire de bibliographies spéciales, curieuses et instructives, an enlarged edition of his Bibliographie curieuse of 1808). Remarkably Peignot’s study is the only published account of engraved books and it is no exaggeration to say that they have been ignored by bibliographers, book historians and historians of book design for over two hundred years. The title of Peignot’s study – Notice bibliographique de livres dont le text est gravé – makes a good definition of engraved books: books in which the text is engraved, implying a substantial amount of text, excluding atlases and suites of plates with captions. Peignot put forward three reasons for engraving the text, rather than printing it from movable type: 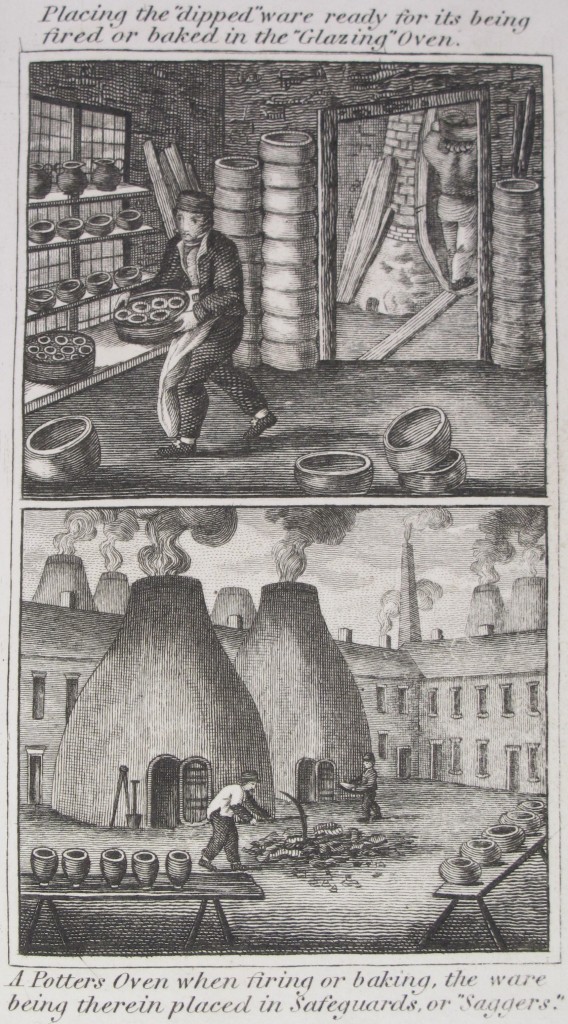 A representation of the manufacturing of earthenware (London, 1827), CCE.66.4

There are a number of other reasons for producing engraved books, not discussed by Peignot because he was elitist in the choice of books he described in the bibliography. He specifically excludes elementary books of architecture and surveying, musical education, almanacs and writing books which, he says, are of little interest to the collector. But for the modern historian taking a more inclusive view of book history than the early nineteenth-century bibliophile, these kinds of books – included in the Library’s recently-acquired collection – add considerably more to our understanding of the economics and aesthetics of engraved books than Peignot’s selection of literature and history. To start with, some of the more modest publications may have been produced as engraved books for simple economic reasons: for a small run they are likely to be cheaper . A letterpress printing shop requires a large capital investment in type, presses and skilled workmen; type is re-used during the production of a book and the whole edition has to be printed in one run so it is necessary to purchase the paper for the entire edition. In contrast an engraved plate of text can be prepared by an engraver with no capital outlay other than the blank plate and his engraving tools, and the rolling press printer’s shop is cheaper to equip than the letterpress printer’s shop. Most significantly there is no economy of scale in actually printing the book. Once the plate is engraved, the unit cost is the same for one copy as for 100, there is no need to purchase the paper for the entire edition. Engraving can therefore be used for print-on-demand publishing with very much lower set up costs than for letterpress books. Once made, engraved plates are kept on hand for reprints as required – this was absolutely standard practice in music publishing – and this is significant for the accuracy of the text. With letterpress printing, the type has to be re-set for a new edition, inevitably introducing new errors and indeed errors can be introduced during the run of a letterpress book. It is not clear that the issue of error was ever a motive in producing engraved books in the eighteenth century, but it was for Charles Babbage at the start of the nineteenth. Babbage experimented with outputting mathematical tables generated by his difference engine directly to punched copper plates as a technology for avoiding error. This is outside the scope of this collection but draws attention to an issue much discussed in book history: the ‘fixity of print’. One can argue that engraved images, whether figurative, diagrammatic or textual, are more ‘fixed’ than text printed letterpress. 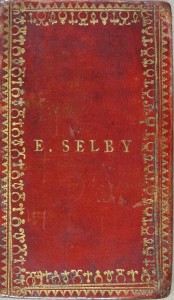 Because of their different production methods engraved books do not fit readily into the protocols of descriptive bibliography, which are based on analysing how the book was made; the economics of their production lead to different methods of distribution; while both distribution and the aesthetics of the page will affect reception. Engraved books need to be studied so that our view of print culture is not blinkered by the traditions of letterpress bibliography driven by textual study. More than two hundred years after Peignot’s pioneering work, Professor Michael Suarez is leading the way by choosing an engraved book, Pine’s Horace (1733), as a case study to open his series of Lyell lectures at Oxford with the general title ‘The Reach of Bibliography: Looking Beyond Letterpress in Eighteenth-Century Texts’ (28 April to 14 May).

Roger Gaskell is a specialist in early scientific and medical books. He leads an annual seminar series on book production in the Department of the History and Philosophy of Science at Cambridge University, with a field trip to the Historical Printing Room in the University Library, and teaches a course entitled The Illustrated Scientific Book to 1800 at the Rare Book School, University of Virginia.

The exhibition will remain on view in the Library’s Entrance Hall cases until Saturday 9 May and all are welcome to visit (Monday-Friday 9.00-7.00, Saturday 9.00-5.00). Please contact the exhibition curator and cataloguer of the collection (Liam Sims, ls457@cam.ac.uk) for further information.