The History and Conservation of the John Weekley Changi Archives 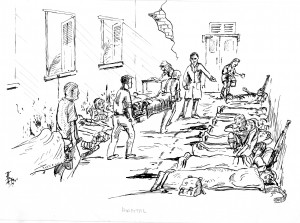 The Changi project team have finished a major conservation challenge, the archives of John Weekley. In this post John Cardwell, Project Archivist and Emma Nichols, Project Conservator, discuss the content and challenges presented by this important part of the Changi Archive. (Please click on images to enlarge them.)

The History of the John Weekley Archive

John Weekley served as an area commandant in the Changi and Sime Road men’s civilian internment camps for almost the entire three and a half year period of their existence.  As a senior member of the camps’ administration, his papers are an invaluable source for understanding their day to day management.  Many are notices disseminating information to internees, and those relating to diet, health and hygiene shed significant light upon the medical history of the camps.  They record the organisation of medical services through the foundation of a hospital and the appointment of a Chief Medical Officer, a Chief Health Officer, a Medical Reference Committee, and a Fatigues Medical Board responsible for the health and safety of the camp’s many workers.

Great attention was paid to sanitation and hygiene, given that dysentery was a constant menace. Measures were taken to control rats, flies, bed bugs and other pests. Efforts were made to control the growth of long grasses which harboured the typhus mite.  The transfer from Changi Gaol to the more open-air camp at Sime Road resulted in an outbreak of malaria, inspiring pleas for more mosquito nets, and a stringent anti-mosquito campaign.  Drugs and medical supplies were always in short supply, but vaccinations for typhoid were given when possible. 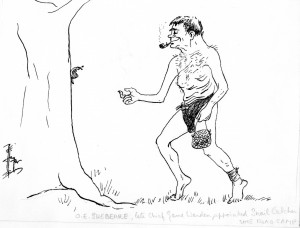 Statistics from the monthly weighing of internees recorded a steady decline in weight. This was the most visible consequence of a diet not only inadequate in quantity, but also in nutritional quality, being seriously deficient in protein, fat and the B vitamins.  The situation became critical during the final stages of the war when rations were repeatedly cut and food supplies became even harder to acquire from external sources.  Soon after the transfer to Sime Road, an outbreak of the dietary disease pellagra occurred.  Under these circumstances the camp relied even more heavily on the fruit and vegetable produce of its own gardens.  Novel schemes were introduced to supplement the internees’ diet, such as the establishment of a snail farm to provide additional protein.  In the spring of 1945, a very welcome supply of anti-beri-beri and anti-scurvy vitamins was received via the Red Cross to combat these dietary diseases.  In addition to disease and malnutrition, Weekley’s archives also reveal another danger threatening internees during the final months of war: exposure to falling metal from Japanese anti-aircraft fire as Allied aerial bombardment of Singapore harbour intensified.

The Conservation of the John Weekley Archive

The John Weekley Archive forms one of the ten conservation work packages in the Changi Archive and is by far the largest; consisting of over a thousand leaves of paper, adhered by their left hand edge into several thicker paper folded covers. The papers are all of differing sizes – from A4 to 1 cm strips; weights – from thick paper to very thin transparent paper known as onion skin; and colours – classic white and cream to violent shades of pink, yellow and blue. Though each folder had originally been one solid block of papers, over time, probably through a combination of intent and accident, the leaves had been separated into sections of varying number, adhered together but no longer to the cover.  All of the leaves had sustained some kind of damage ranging from tears, losses and skinning, to staining from the adhesive.

(L-R) Examples of damage to the John Weekley papers

It is not known whether the papers were adhered into these folders whilst in the camps or later after the war had ended. Storing the leaves together in this way had been of limited success. Positively, the papers had been kept flat, in order and protected from external elements. Negatively, the way the leaves were adhered together meant handling and reading the information they contain was incredibly difficult. Digitisation would prove impossible as many of the leaves were so badly damaged they could not be viewed fully without risk of considerable strain and further damage to themselves and their neighbouring leaves. In many cases leaves were glued together over the text meaning they could not be read on the left hand edge. Considering the conservation treatment priorities for this project of utilising safe handling and access to information for digitisation, and for the longevity of the material, it was decided to separate the paper leaves.

Prior to separation every leaf was numbered and photographed to document their condition and position. The leaves were separated in batches by gentle and controlled humidification of the water-soluble adhesive with water vapour, created by using layers of the breathable fabric membrane Gore-Tex® and damp blotting paper. Gore-Tex® was placed over the adhesive area to be softened, followed by damp blotter, with Melinex® on top. Melinex®, a non-breathable archival polyester, provided a barrier which prevented the moisture from the damp blotting paper evaporating, sending it through the Gore-Tex® instead. The Gore-Tex® turned the moisture from the damp blotter into water vapour which then penetrated the leaves and adhesive.

Once the adhesive was softened the leaves could be gently eased apart with a spatula. Any adhesive residue was cleaned away with the aid of a wheat starch paste poultice and a spatula. The leaves were then pressed between Bondina®, an archival non-woven breathable polyester, and blotting paper to dry. Any repairs or infills were applied with wheat starch paste and varying weights of conservation grade archival quality tissue, matched to the thickness of the paper leaves.

(L-R) A leaf in bad condition adhered in the folder, the removed leaf, Conservator Emma Nichols applying repairs to the leaf on a light box, the leaf of paper after repair

The leaves will be taken to be digitised in their separated state to make the process of imaging both recto and verso as simple as possible. The long term housing solution is to store the leaves in fascicules. Fascicules are pamphlet style bindings made of blank, archival quality paper pages. The leaves will either be hinged to the pages by conservation grade archival quality tissue, or, in the case of the thinner more fragile papers, be encapsulated between leaves of Melinex®. This housing solution will mean the collection may be stored and viewed in a fashion similar to the original structure of the paper folders and be held safely together with no damaging adhesive or strain to the leaves.