A Theatre of Treasures

The third of our ‘Treasures of the University Library’ talks was given by Anne Taylor, Head of the Map Department:

In 1968 an application was made to export a set of sixty-six early 17th century maps of the counties of Great Britain and Ireland by John Speed. An objection was raised and the export was stopped – the maps being acquired by Cambridge University Library soon after (Atlas.2.61.1). So what was so important about these maps?

Firstly, the maps were proof impressions. Being printed from copper plates upon which the map detail would have been engraved in reverse, it would have been expedient to print from the plates occasionally to make sure that the detail, especially writing, was the correct way round.   Some of the maps are the same as the versions that were first published in The Theatre of the Empire of Great Britaine in 1611/12. Some vary slightly with, for example, missing dates or plain rather than a stippled sea. 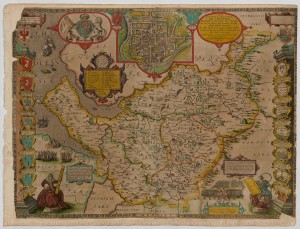 One proof map, however – and this is the second reason for the export ban – the map of Cheshire, was believed to be unique (later a second copy was found in the USA though it is not coloured). The map which appears in the published atlas is from a completely new plate. But why?

It is thought that the Cheshire map was the first map for the atlas to have been engraved, perhaps in 1604. Both Speed and the engraver, William Rogers, came from Cheshire so it is natural that they might want to start with a county with which they were familiar. But why abandon it? 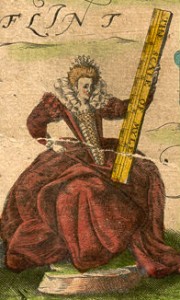 Queen Elizabeth I from John Speed’s map of Cheshire, circa 1604

We can only speculate. In the bottom left corner of the map is a portrait of Queen Elizabeth I. She died in 1603 and so by the time the atlas was published some 7 years later it might have been thought that the map was somewhat out of date.  The other maps in the atlas were engraved between 1607 and 1611 by Jodocus Hondius Sr. in Amsterdam, so perhaps a style more in keeping with these was desired. Or perhaps the printing plate was damaged or lost. What we do know is that engraving a copper plate was an expensive and time-consuming task – each plate might take several months to complete – so it was a decision that was unlikely to have been taken lightly.

The Theatre of the Empire of Great Britaine, published in 1611/12, was the first atlas to give coverage of the whole of the British Isles. John Speed was born in Farndon, Cheshire in about 1552, married Susanna Draper in London in 1575 (they had 18 children) and died in 1629. He was buried alongside his wife at St Giles Cripplegate Church where a monument was erected in his memory.

Speed undertook very little original survey work (the exception being some of the town plans) and instead copied, adapted and compiled the work of others. He openly acknowledged the debt his atlas owed to Christopher Saxton and others, stating in its introduction: I have put my sickle into other mens corne, and have laid my building upon other mens foundations. (Saxton – ‘the father of English cartography’ – had mapped the counties of England and Wales in previously unsurpassed detail between 1573 and 1579).

Speed, however, made the maps his own by including town plans (which are often the earliest depiction available), coats-of-arms and other decorative features.  He also marked the internal divisions of each county, called hundreds. 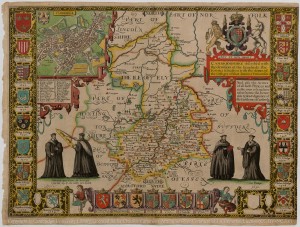 The map of Cambridgeshire from Atlas.2.61.1, a set of proof maps for ‘The Theatre of the Empire of Great Britaine’

The map of Cambridgeshire is a particular favourite with its decorative border and figures in academic dress. Although dated 1610 it does not include the arms for Sidney Sussex College which was founded in 1596.  It seems that they should occupy the blank shield in the bottom right – as they do in the edition published in ca. 1666 – but perhaps the information was not provided in time. The plan of Cambridge was copied from that drawn by John Hamond (a former student at Clare Hall, Cambridge) in 1592, the only surviving copy of which is in the Bodleian Library, Oxford.

We do not know how many copies of the first edition of the atlas were published, perhaps 500 or so, and it would have been expensive (the 1627 edition was offered at 40 shillings bound, 30 shillings unbound ; with hand colouring perhaps increasing the price by half as much again). The printing plates themselves passed between successive publishers being updated along the way, and the last printing from them was between about 1756  and 1770, nearly 150 years after they first appeared.

So the proof maps in the collections of Cambridge University Library mark the beginning of a long history.

The proof maps are known as the Gardner copies after Eric Gardner, a collector of Speed maps who had close connections with Cambridge. All sixty-six maps are available for viewing in the Cambridge Digital Library. See also a blog written in 2015

Some other online resources that may of interest:

John Speed : The first part of an extensive biography by Ashley Baynton-Williams (mapforum.com/02)

John Speed: The Prospect of the Most Famous Parts of the World (mapforum.com/03 ; see link to Speed II)

A Short History of Print Art 1500-1860 By Roger Baynton-Williams  (an updated and expanded version of a version published in Map Forum (mapforum.com/05 ; see link to Beginner’s Guide – Printing)