Posted on 24 April 2017 by Special Collections

On 24 April 1917, one hundred years ago today, Private Frederick George Dunnett of the 2nd Suffolk Regiment and a member of University Library staff died in the First Eastern General Hospital. He was 21 years old. 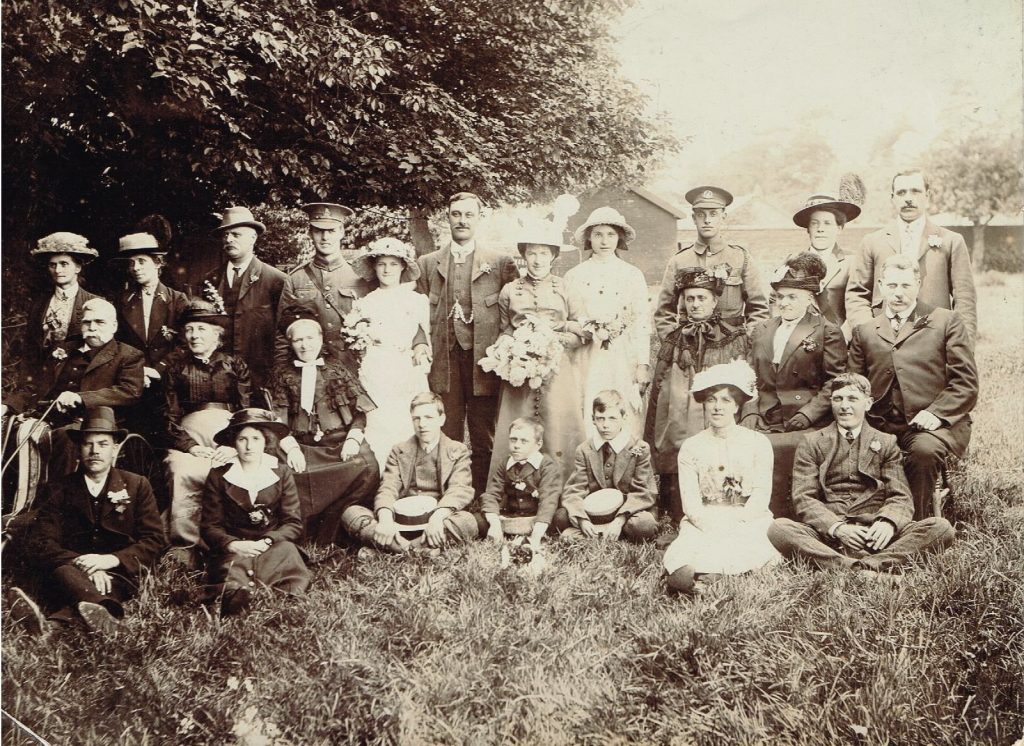 Photograph of a family wedding showing Frederick Dunnett (3rd from right in back row in military uniform). With thanks to Ray and Annie Humberstone.

Born in Attleborough, Norfolk in 1896, Frederick was the eldest of four children born to Frederick and Anna Maria Dunnett. In 1905 Frederick’s father, a postman, began work in Cambridge and the family moved to the city. The 1911 census of England shows the family living in Richmond Road, Cambridge with fifteen year old Frederick’s occupation described as: Employed University Library.

I looked for mention of Frederick within the University Library archives in the annual reports and in the History of the Library volume covering the years 1913-1923. An entry in the Report of the Library Syndicate for the year ended 31 December 1915 states simply:

Sadly, the next mention of Frederick in the archives is found within the Report of the Library Syndicate for the year ended 31 December 1917. One hundred years on it still makes difficult reading:

The Syndicate heard with deep regret of the death of F.G. Dunnett, in the First Eastern Military Hospital, on April 24. He had been invalided home from France, and was about to rejoin his unit, when he was attacked by cerebral meningitis which proved fatal. In him the Library lost a junior member of staff of much promise, whose character and ability were highly esteemed by those with whom he worked.

Local newspaper reports published after Frederick’s death help paint a picture of his life. The Cambridge Daily News of Thursday, 26 April 1917 reported Frederick’s death. The article describes how he joined the army in December 1915, went out to France in August 1916, and was invalided home in February 1917. As well as working in the University Library he was a teacher in the King Street Wesleyan Sunday School where he was secretary of the Primary Department. The article notes that Frederick’s parents had now lost two sons in the war: Private Cecil Dunnett died in Belgium in May 1915 aged 18.

Frederick’s funeral took place at Histon Road Cemetery at 3.00pm on Saturday 28 April 1917 where his grave (photographed above) can still be found. The Cambridge Daily News of Wednesday 2 May 1917 gives a detailed description:

The body was removed from the hospital to 59, Richmond Road, where the cortege started from. Corpl. Sharpe was in charge, with Bugler H.T Smith. The coffin, which was covered with the Union Jack, was borne by Ptes. H. Smith, A. Humphreys, J. Talbot, J. Foreman, R. Moore and R. Hobday. The service in the cemetery chapel and at the graveside was conducted by the Rev. R. Winboult Harding (Wesleyan minister).

The article informs us that Frederick’s only surviving brother, 17 year old Charles Wilfred Dunnett, was ill and unable to attend the service. The University Library was represented by eight members of staff: H.G. Aldis (the Library’s first secretary, whose own son, Ralph, would be killed in action six months later), C. Sayle, H. Wakeling, A. Miller, A. Cook, A. Baldrey, W.F. Dunn and O. Johnson. Staff and scholars of the King Street Wesleyan Sunday School also attended.

Frederick and Cecil Dunnett are commemorated on three war memorials in Cambridge: in the Wesley Methodist Church, St Luke’s Church and the Cambridge Guildhall. 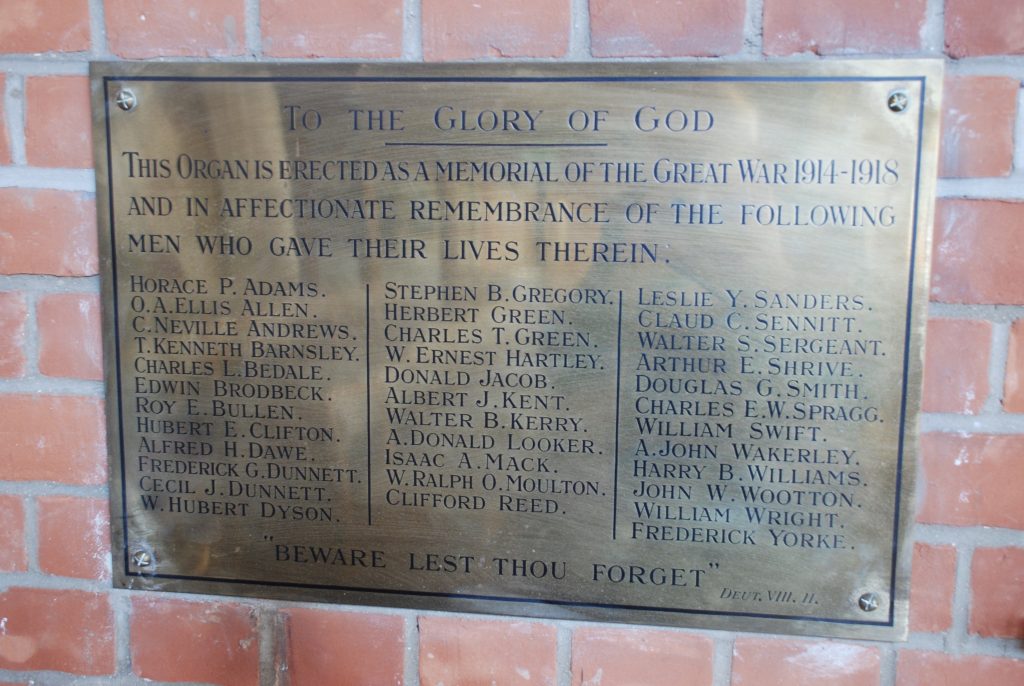 First World War memorial in Wesley Methodist Church, Cambridge, including the names of Frederick and his brother Cecil

During the time Frederick was a member of staff, the Library was housed in the Old Schools in the centre of Cambridge. When Frederick was invalided home, he was treated and died in the First Eastern General Hospital. Today, the main University Library stands on the site of that hospital, having moved across the river in 1934. As staff, we work every day on the site where Frederick, and 70,000 other soldiers, were cared for during the First World War.

In 2014, the UL Syndicate discussed the placing of a plaque in commemoration of the First Eastern General Hospital and two engraved bronze plaques were placed on wooden benches on either side of the Library’s main entrance. In 2016, the Cardozo Kindersley Workshop engraved a commemorative inscription onto the Library-facing outer wall of Clare College’s Memorial Court. 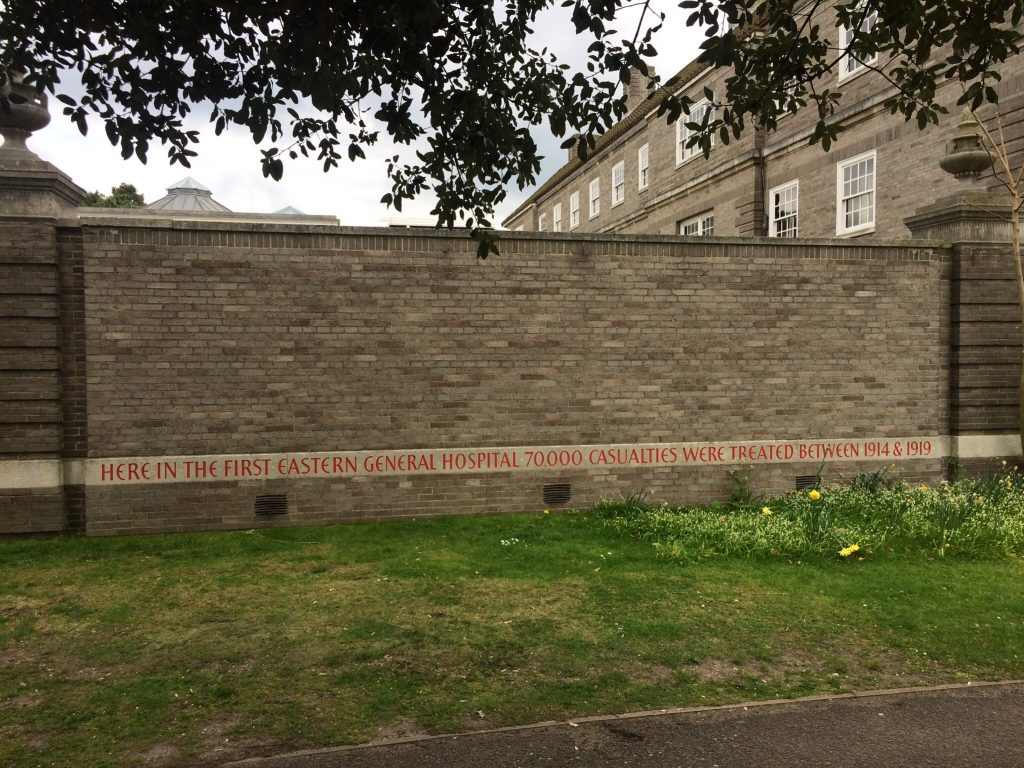 The memorial was inaugurated by Surgeon Vice Admiral Alasdair Walker OBE, Surgeon-General of the British Armed Forces, on Wednesday 7th September 2016. A transcript of Admiral Walker’s speech accompanies Philomena Guillebaud’s From bats to beds to books.

I will always remember Frederick George Dunnett, a member of the Library staff who died, one hundred years ago today, on the site where the Library now stands.

I would like to thank Ray Humberstone who kindly shared both family information about Frederick and the wedding photograph of his wife’s parents, to enable Frederick, his wife Annie’s half-cousin, to be commemorated and remembered. And my thanks also to David Taylor, Cambridge Wesley Methodist Church archivist, who kindly took the photo of the memorial plaque in the church especially for this blog post.