Moving to the new University Library in 1934 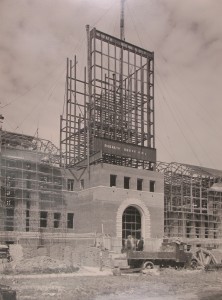 Exactly eighty years ago today, at 4:02pm on 31st May 1934, the last visitor left the old University Library, housed in the building known as the Old Schools, before the new library opened some months later.  At the time of the construction of Giles Gilbert Scott‘s library, with its iconic tower, three books of photographs were prepared.  One (now Cam.a.934.2), presented to the Library by the Consulting Engineer, Burnard Geen, records in minute detail the construction of the building itself, from the preparation of the ground to the decoration of the interior.  The image of the library tower to the left comes from this volume.  A second book of snapshot photographs taken by member of staff R. G. Pilgrim also records the construction of the building, but has not been used in this blog (it is Cam.a.935.4).  The third, from which photographs appear below, records the move of books and other paraphernalia from the old library to the new, focusing on the people involved (it is now Cam.b.934.11); it is made up of images taken by several library staff.  All three provide a fascinating view of the genesis of our world-famous University Library, which now holds some eight million items.

The University as an institution is known to have owned books in the 14th century, which were kept in chests in the University Church, along with money, church vestments and University archives.  However, it did not have a library room as we might imagine it, where books might be consulted, until the construction of the west range of the Old Schools around 1420, which included a library on the upper floor and a school of canon law below.  The earliest surviving catalogue, compiled in 1424 and kept up to date until 1440, lists 122 volumes, which had increased to 330 by 1473, no surprise with the advent of printing in the 1450s.  Aside from a blip in the mid-16th century, when many books were lost during and immediately after the Reformation, the library’s collections have continued to grow exponentially, and were increased threefold in 1715 with the gift by King George I of the 30,000-volume library (known since as the Royal Library) of John Moore, Bishop of Ely.

Over time books came to occupy all four wings of the Old Schools and by the 19th century, more space was needed.  Charles Cockerell’s new building was constructed between 1837 and 1842, its exterior design echoing that of the Wren Library at Trinity, finished in 1695.  After the move to the new library in 1934 it housed the History and Law Faculty libraries, before becoming the college library of Gonville & Caius in 1996.  The Cockerell Building was originally to form the north range of a completely new library, replacing the medieval Old Schools, but it remained the only part of the plan executed.  Two further wings were added on the west side of the Old Schools (one in the 1860s, the other in the early 1890s), giving enough space to last into the 20th century.  But by 1921 it was decided that there was no further room for expansion and playing fields belonging to King’s and Clare Colleges were eventually chosen as the new site.  Construction began in 1931 and over the summer of 1934, the entire contents of the library – packed into 23,725 boxes and transported by horse and cart – were moved across the river to their new home, leaving their medieval home of a little over five centuries.  The old library’s empty rooms are recorded in one of the photo albums, including the East Room (no. 7 below), famously depicted in 1815 in Ackermann’s History of the University of Cambridge. 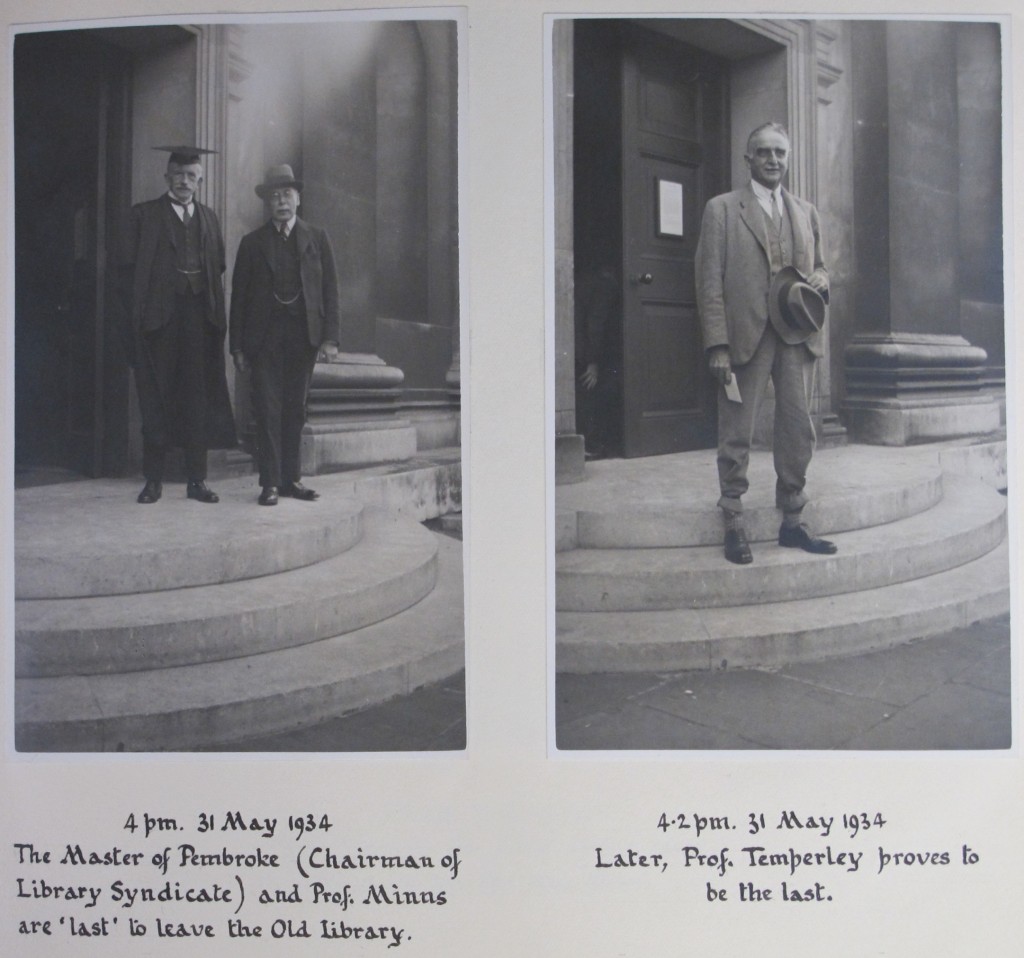 2. The ‘official closure’ of the Library at 4pm on 31st May 1934, with the Master of Pembroke (Professor Arthur Hutchinson) and Ellis Minns, Disney Professor of Archaeology. Shortly followed by a rogue reader at 4:02pm (the Professor of Modern History, Harold Temperley, later Master of Peterhouse)

This blog shares a selection of photographs from Cam.b.934.11, with which it seems appropriate to mark this anniversary.  The quality of the originals is not perfect, but they remain a valuable record of an important moment in the Library’s history. 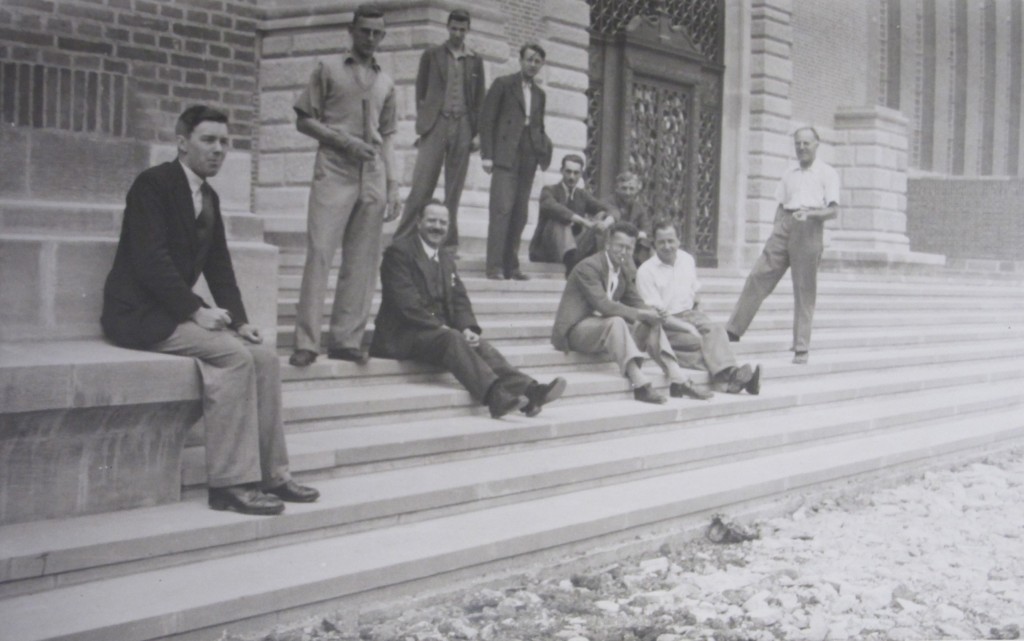 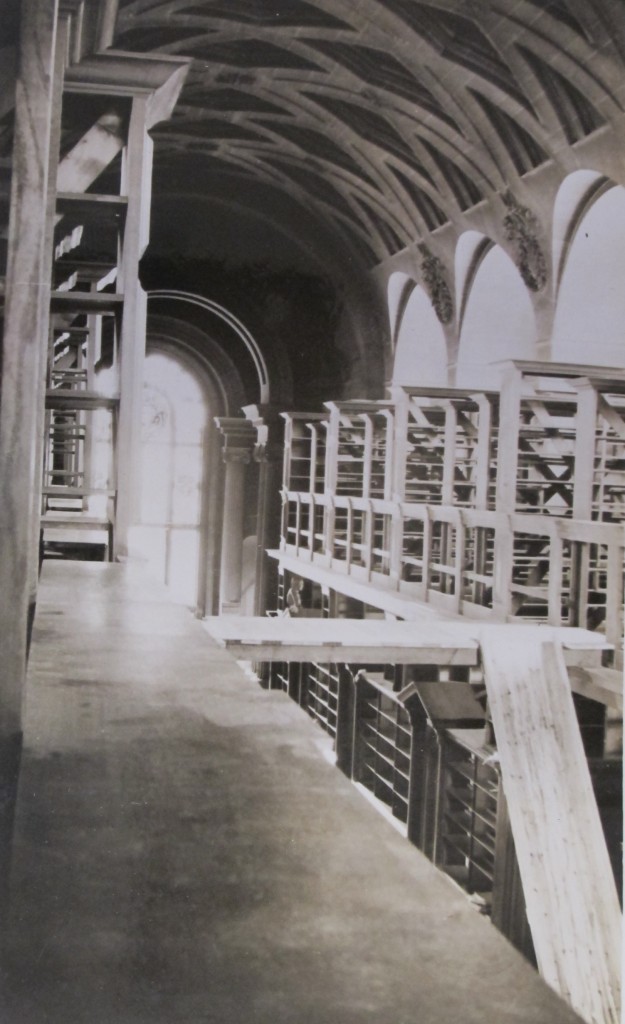 4. Shoot for boxes from the gallery of the Cockerell Building, now Gonville & Caius College library 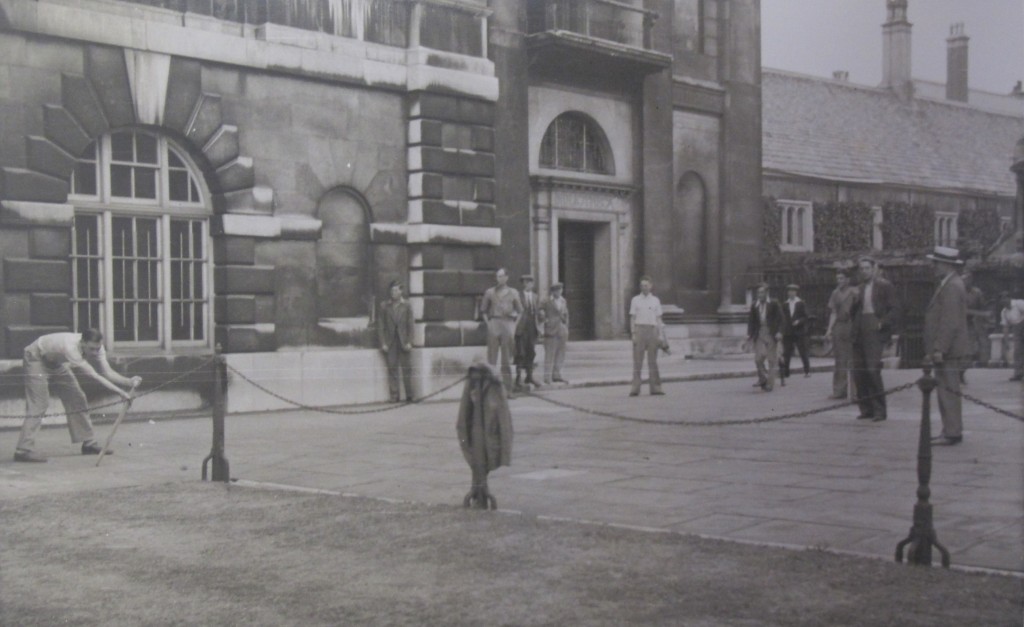 5. Cricket during a break, outside the old library on 20th July 1934. The building with chimneys to the right is part of Caius College, and the Gate of Honour can just be made out on the far right 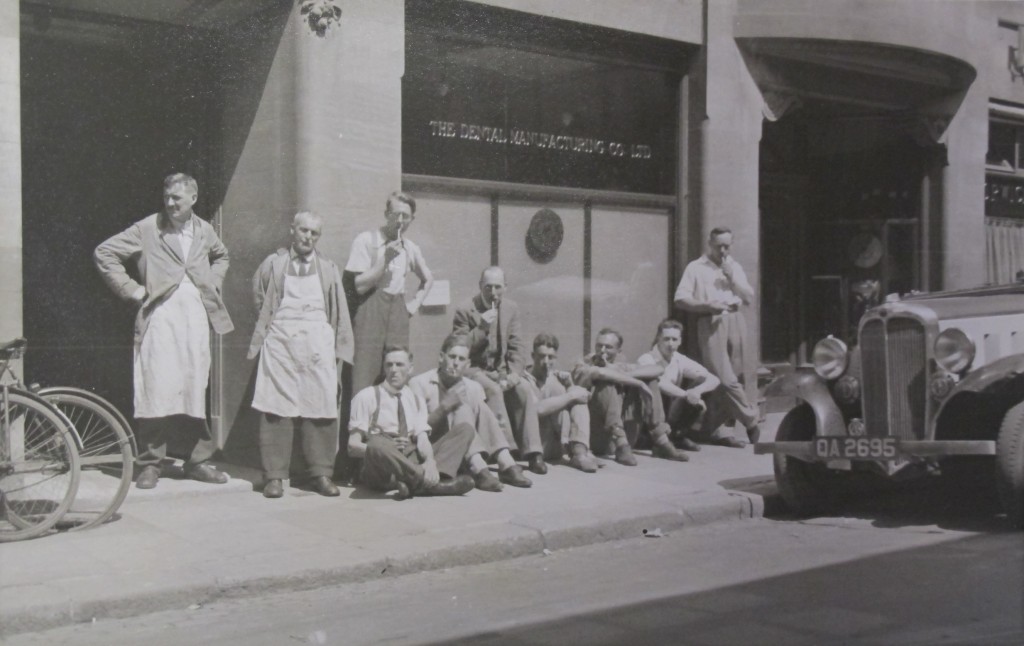 6. Outside the old Liberal Club in Downing Street, 23rd July 1934. This photograph is annotated “Members of the staff sucking lollipops given by the Librarian!” 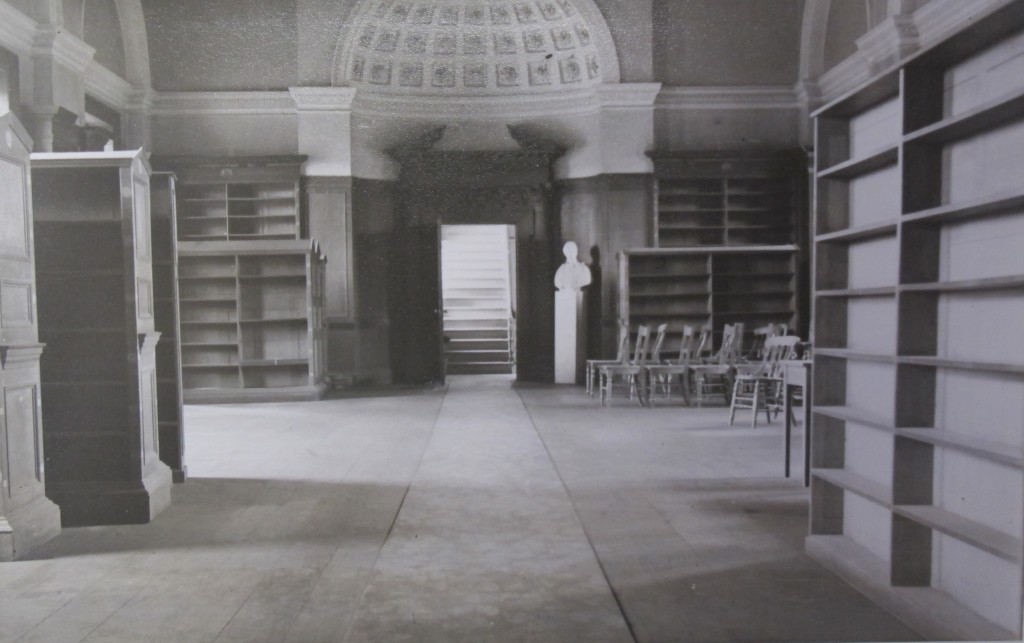 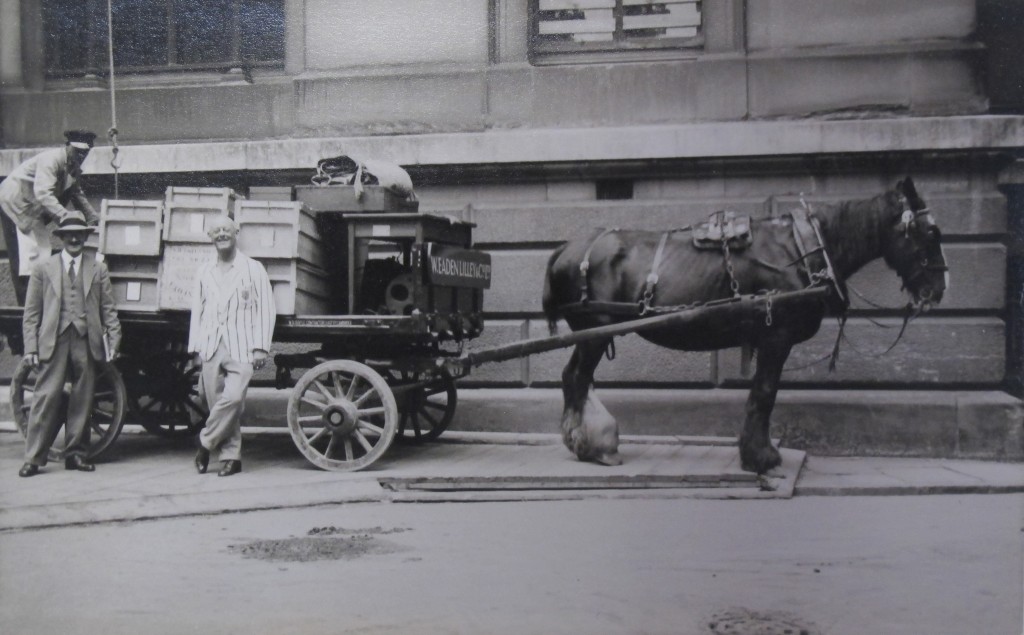 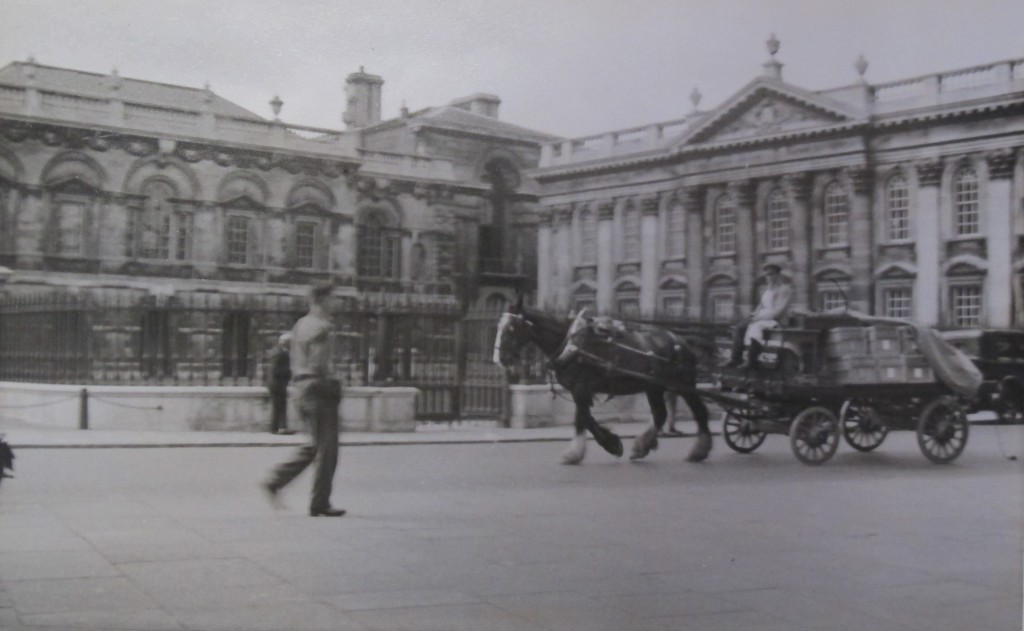