The Earliest Known Draft of the King James Bible 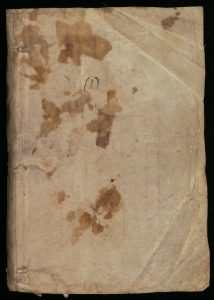 Front cover of MS Ward B

It is rare that archival research makes the national news.  Jeffrey Alan Miller’s identification of a draft of a portion of the King James Bible hit the headlines in October 2015: not only was it the earliest known draft, but was uniquely a draft written by the hand of one of the translators, who was known by name.  The notebook in which Miller found this work – Sidney Sussex College, MS Ward B – had belonged to Samuel Ward (1572-1643), Master of the College from 1610 until his death.  Eighteen months after the discovery, the notebook has been digitised in full and published on the Cambridge Digital Library, in the latest instance of an ongoing collaboration between the University Library and the Cambridge Colleges to make archival and manuscript material available online. 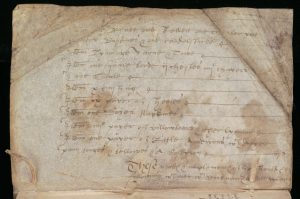 Inside front cover of MS Ward B, showing an inventory of furnishings and fabrics, with itemised costs.

Looking at the notebook, one can easily understand why the true significance of its contents remained unrecognised for so long.  Its physical form is quite unremarkable, typical of economically produced early modern commonplace books.  It is small, pocket-sized even, formed of four quires of paper.  Its edges are rough and uneven; many leaves have been stained by damp and some corners have been heavily thumbed.  Its soft wrapper was made by recycling a leaf from what appears to have been an old account book or inventory.  Within, the handwriting is rough, cramped and difficult to decipher; there are passages not only in English and Latin, but frequently Greek too and occasionally Hebrew.  The order in which notes were added is as yet unclear.  MS Ward B resists straightforward reading in both physical and digital versions: text is written from the front and back of the volume, the latter appearing upside down when first encountered; there are crossings-out and interlinear insertions; and pages with densely written notes are interspersed with others that are blank but for the odd entry. 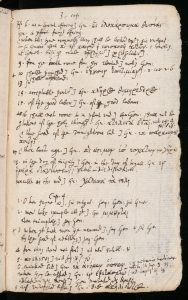 The significance of this notebook for our understanding of how the King James Bible was produced has been elucidated by Miller in his introduction on the Digital Library and in an earlier article in the Times Literary Supplement (no. 5872, 16 October 2015).  His findings concern those portions of MS Ward B that he has been able to identify as preparatory draft translations of Apocrypha: 1 Esdras, Wisdom 3-4 and Judith 2:26.  On f. 50v, for example, Ward proposes various changes to the translation provided by the Bishops’ Bible, bringing the English text closer to the Greek source.  Some amendments were incorporated into the King James Bible, others not – and MS Ward B sheds new light on how the work of an individual and the teams of translators was patched together prior to printing. 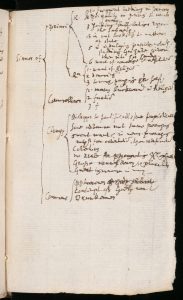 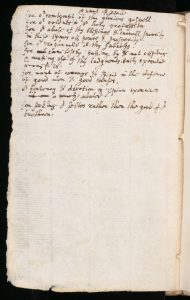 Excitingly, many of Ward’s remaining notes in MS Ward B have yet to be fully understood.  Some notes are clearly personal: on f. 48r, Ward compiled a list of some eight shortcomings, including ‘contempt & want of zeal of thy glorious gospell’, ‘coldness in our holy profession’, ‘want of courage & spirit in the defense of good men & good causes’, and ‘fervency & devotion in Christian exercises so much abated’.  On the facing page, he inserted a diagrammatic catalogue of the sins of the various estates – princes, counsellors, clergy and commons – setting his own failings in a broader post-lapsarian context.  Ward’s puritanical habit of critical self-examination is recorded in the diary he kept during his late twenties, but MS Ward B reveals that he persisted with the practice well into his thirties. 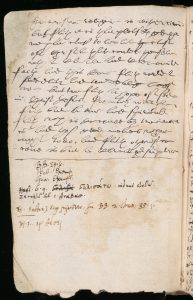 MS Ward B, f. 6v: notes by an unknown hand, followed by Ward’s notes for the translation of 1 Esdras

What else did Ward write in this notebook – and does it have any further bearing on his work as a Bible translator?  Over what period did he use this notebook?  When and from whom did he acquire it?  Another, as yet unknown, hand made notes on the opening leaves concerning Romans 6 and Galatians 5, apparently prior to the notebook’s use by Ward; was this another translator?  These questions and many others are prompted by Miller’s discovery.  The availability of MS Ward B for all to view online means that further revelations will surely follow.

A further post on the possible provenance of Samuel Ward’s papers – including MS Ward B – will be published soon.