‘A Trunk of Writings’: The Fate of Samuel Ward’s Papers

A month ago, we announced the digitisation of the earliest known draft of part the King James Bible, MS Ward B of Sidney Sussex College.  By what means did this notebook and other of Samuel Ward’s papers arrive there?  Ward’s career suggests an obvious route, but there is no straightforward answer.  Having lain neglected for some years, Ward’s papers were put in order and described by Margo Todd.  In so doing, she proposed a possible provenance for these materials, or some of them, on the basis of documents held at Cambridge University Library.  The occasion of the digitisation of MS Ward B seemed an appropriate opportunity to make these more readily available too. 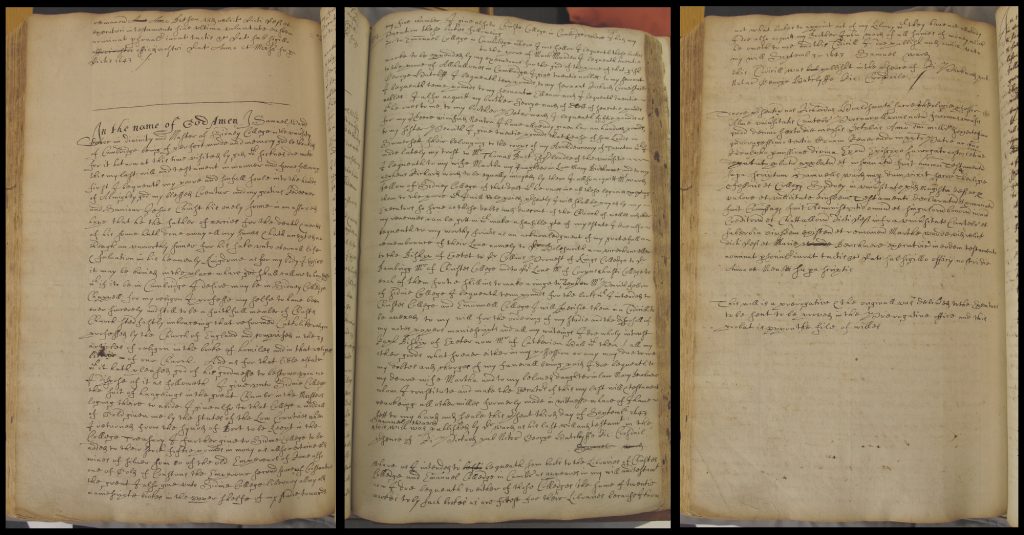 The first document is Ward’s will.  The original document is not known to survive, however a contemporary transcript made by the Vice-Chancellor’s Court is to be found in the University Archives (VCCt.Wills III, ff. 271v-272v).  Another, in the form of a notarised copy, is held at the National Archives among the wills proved at the Prerogative Court of Canterbury in Oxford (TNA, PROB/10/642/18, f. 39); a microfilm copy has been scanned and is available for download. 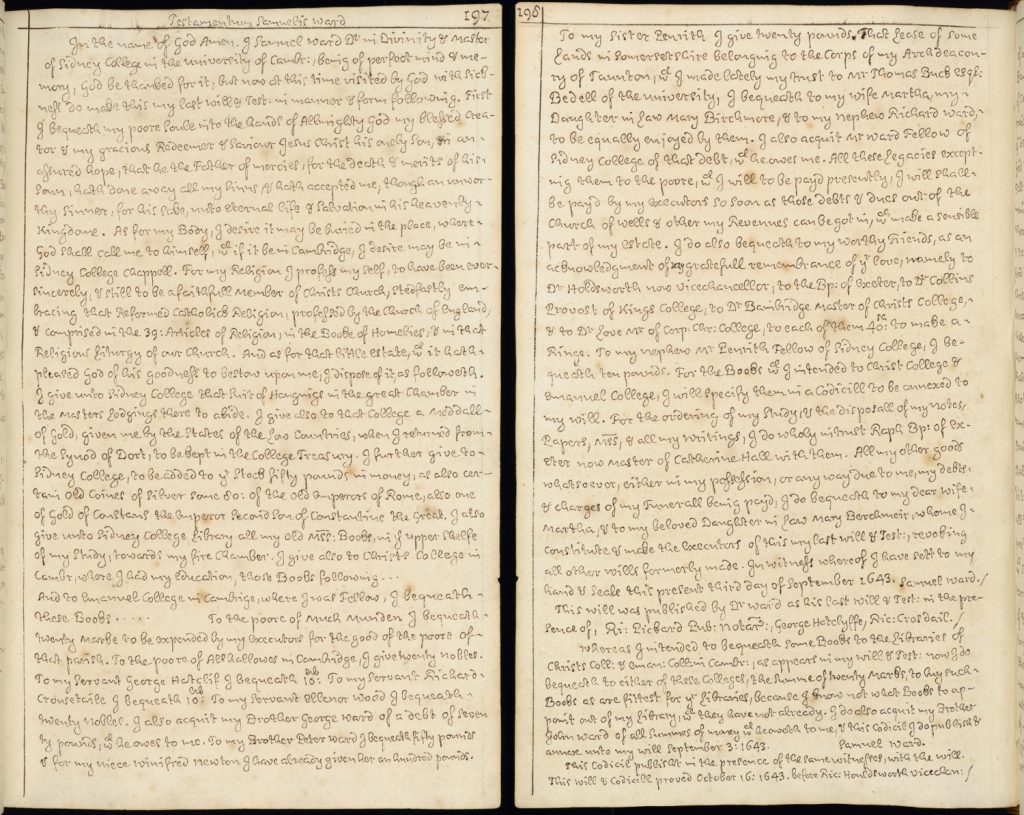 …I Recommend unto my said Nephew Seth Ward the perusall and consideration of all the Books and writings in a Trunke at Knightsbridge most of which were written by Doctor Samuell Ward deceased willing that such of them as are perfect may either be printed and published in the name of the Author or given to the Library of Sidney College in Cambridge to be there preserved.

The terms of Bishop Ward’s will were contested in the Court of Chancery – Alethea his widow as defendant and Jane Ward, the daughter of his nephew Seth Ward, as plaintiff (TNA, C 5/195/17) – and a further probate lawsuit was brought (TNA, PROB 18/20/113).  That his will was dated 30th April 1687, after he ‘had declined into an incapable senility’ (according to the Oxford DNB), perhaps gave grounds for these disputes. 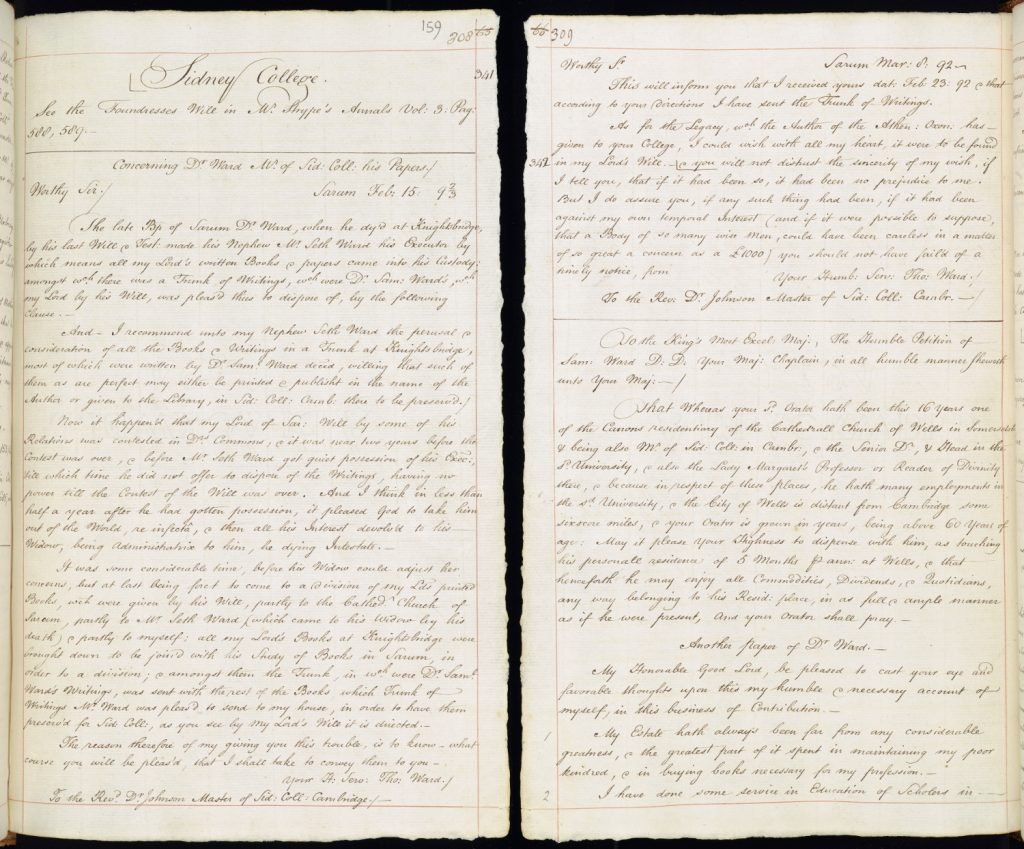 The consequences are related in a letter dated 15th February 1692 – now preserved in transcript in another volume of the Baker manuscripts, Mm.2.25, f. 159r – from Thomas Ward to Dr James Johnson (c. 1640-1703/04), Master of Sidney Sussex College from 1688 until his death.  Thomas Ward was another nephew of the late Bishop Ward, to whom he had bequeathed, jointly with Seth Ward, ‘all the residue of my Printed Bookes…to be equally divided betweene them’.  Thomas described a two-year delay before Seth Ward received his uncle’s papers – ‘amongst which there was a Trunk of Writings, which were Dr Sam: Ward’s’ – by which time he too was nearing death.  ‘[A]ll his Interest devolv’d to his Widow, being Administratrix to him, he dying Intestate’, Thomas continued.  After further delay, she had his books sent from Knightsbridge to Salisbury, and the trunk of papers too.  ‘The reason therefore of my giving you this trouble, is to know,’ Thomas concluded, ‘what course you will be pleas’d, that I shall take to convey them to you,’ Bishop Ward’s will having originally directed that they be preserved at Sidney Sussex College.  Three weeks later, having received a reply from James Johnson dated 23rd February, Thomas Ward wrote again to confirm that ‘according to your directions I have sent the Trunk of Writings’.

Having been moved perhaps to St Catharine’s or maybe even to Exeter, to Knightsbridge, and down to Salisbury, the papers of Samuel Ward – MS Ward B perhaps among them – finally came to rest at their point of origin, at Sidney Sussex College.  From Thomas Ward’s letter of 8th March 1692 until Margo Todd’s work in the 1980s, Ward’s papers disappear from the historical record.  Shunted, as Todd recorded, between the Master’s Lodge, the Old Library and the Taylor Library at the College, remaining ‘for the most part neglected’, they have now come to the forefront of historical research into the mediation and dissemination of the Bible in the seventeenth century.  For so long hidden, they may now be seen, studied and valued by all.