A Quaker bequest to the University Library 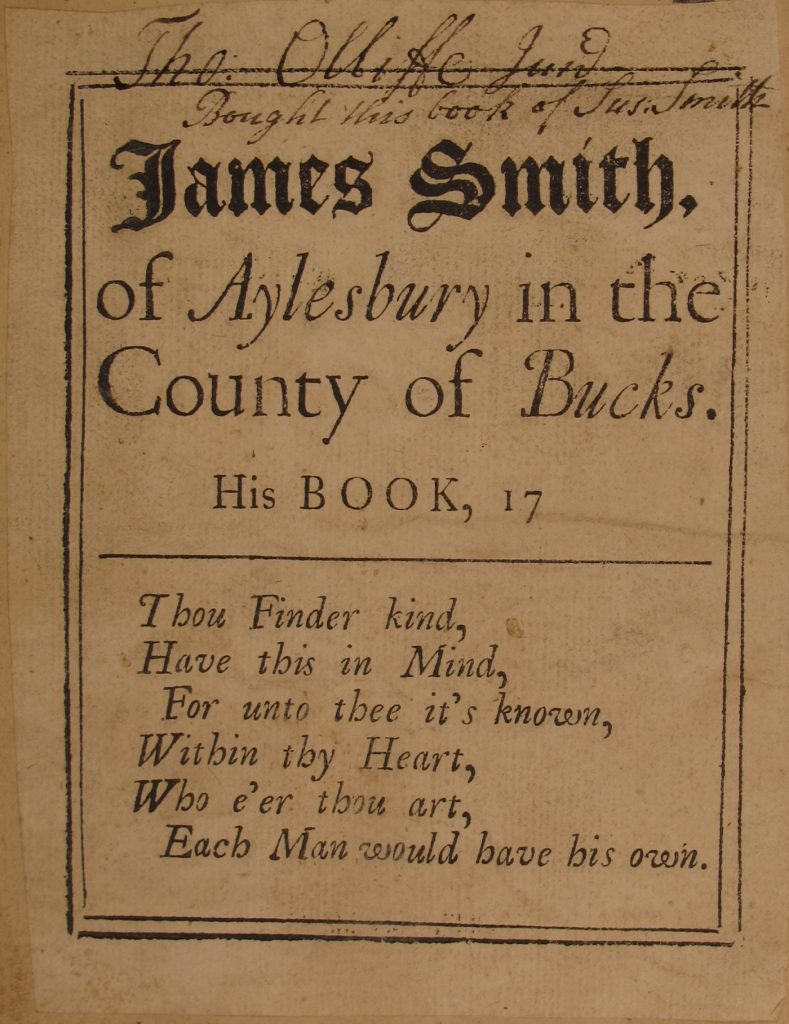 In 2016 a large collection of Quaker material was added to the Library’s holdings and a selection is now on display in the Library’s Entrance Hall display cases. Former Deputy University Librarian David J. Hall (1947–2015) bequeathed the books, and they are now catalogued and available to readers in the Rare Books Department. Also coming to the Library later this year will be David’s acquisitions records for his library, an important window on over forty years of collecting. The Quaker movement has its origins in the the English Civil War. Dissatisfied with the Church of England’s teachings, George Fox (one of the movement’s founders) experienced a vision in 1652, spreading his belief that people could enjoy a direct experience of Christ without the intervention of clergy. Fox  spoke of ‘trembling’ at the word of God, and the word ‘Quaker’ was originally intended to mock, but soon became widely used. By the 1680s the movement had over 60,000 members.

David Hall was a Quaker himself and his books informed his faith and writing. During nearly forty years in the Library he took charge of several large building projects, notably the Rotherham Building (housing the Tea Room) and the extension now occupied by the Rare Books and Manuscripts departments. A generous friend and a donor to many institutions, it was David’s wish that the Library receive those of his Quaker books not already in its collections.  Around 500 titles were chosen, including over 250 pre-1800 English editions and many nineteenth-century biographical works as well modern academic titles. The collection is rich in provenance and a number were once part of early Friends’ Meeting House libraries. The bookplate shown here is found inside a 1694 edition of A memorable account of the Christian experiences … of … Stephen Crisp, who, with a Dutch wife and mother, was responsible for taking the Quaker faith from his native Colchester to the Low Countries. The owner, James Smith, acquired it in 1706, who added his fine bookplate, complete with a six-line verse. Later it was bought by Thomas Oliffe Junior from one of Smith’s relatives. 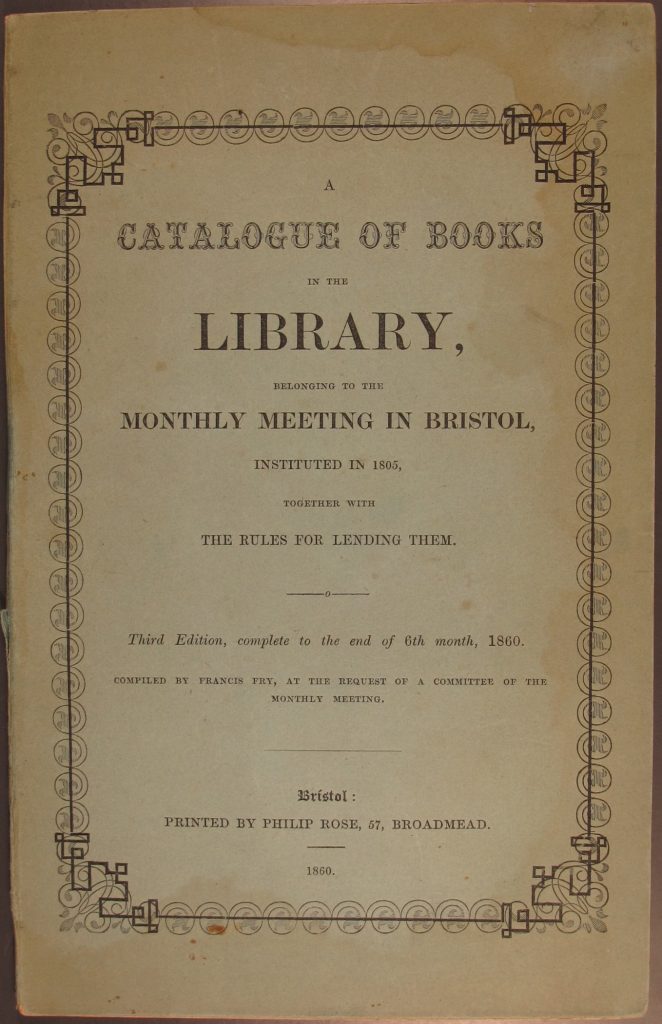 The collection also contains printed ephemera, including a 1780 Report of the state of Ackworth School, a Quaker institution founded in 1779 by John Fothergill with an emphasis on quiet reflection and the search for God within oneself and others. The report details expenditure, regulations for admitting children and amounts of money given by subscribers (totalling a very healthy £6965). The school, which still exists, is divided into four houses named after prominent Quakers and counts among its alumni Samuel Tuke (1784–1857), grandfather of the Victorian painter Henry Scott Tuke. Evidence of Quaker libraries – personal and public – is to be found throughout the collection, either in the form of ownership inscriptions, or in the form of library catalogue, as with this example from Bristol in 1860. Quakerism reached Bristol in 1654, and so many attended meetings there that they had to be held in the open fields around the city. The Quaker library was begun in 1805 and this third edition of its catalogue (containing about 550 titles) was compiled by one of Bristol’s most famous sons, Francis Fry. A partner in his family chocolate business and book collector, Fry’s own library of over 1200 Bibles was acquired for the British & Foreign Bible Society Library (since 1985 deposited at Cambridge University Library) after his death. The collection ranges in date from 1658 to 2011, focussing primarily on the eighteenth and nineteenth centuries. Jonas Dell’s A voyce from the temple (1658) is the oldest. Nothing is known about his early life, but Dell may have fought in the Parliamentarian army in the Civil War, becoming disillusioned with the Cromwellian establishment. 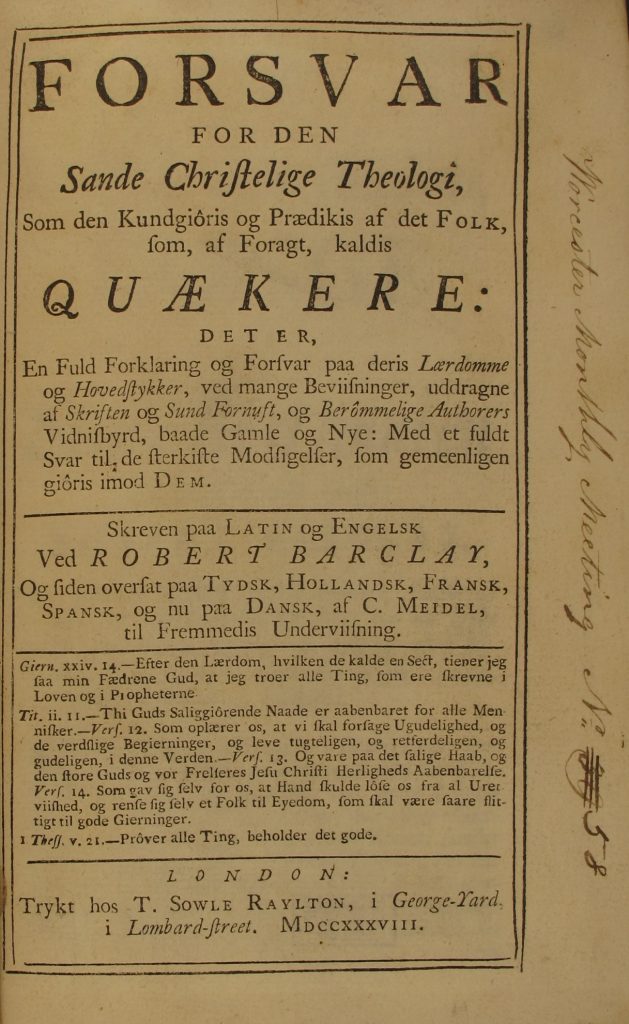 One of the more modern items is a 1992 edition of the Quaker tapestry guide. Conceived in 1981 to illuminate Quaker history from the seventeenth century to the present day for the children of Taunton (Somerset) its 77 vibrant embroidered panels were made with the help of 4000 men, women and children over 15 years. The design on the cover, shown at the head of this post, was inspired by text in the Quaker Faith and practice guide: ‘[The Religious Society of Friends] might be thought of as a prism through which the divine light passes to become visible in a spectrum of many colours’. Usually on permanent display in Cumbria over 11,000 people visited a display of the panels in Ely Cathedral in 2012, and between 7th and 18th August it will be visiting London. Other modern works include Gil Skidmore’s Strengths in weakness: writings by eighteenth-century Quaker women (2003), one of a number of American-printed books under-represented in UK libraries. The collection is particularly strong in editions of works by key Quaker figures. Several of Robert Barclay‘s works may be found, including the 1738 Danish language edition of his Apology for the true Christian divinity, one of the most impressive theological writings of the seventeenth century. First published in Amsterdam (in Latin) and then in English in 1678, Barclay began the work with a letter to Charles II, explaining that, despite their dissention from the established Church, the Quakers were a peaceful group unworthy of punishment. By the late eighteenth century this copy was part of the Worcester Monthly Meeting library. Another key figure is Job Scott, a prominent American Quaker and school teacher at the Quaker Meeting House in Providence, Rhode Island. He tutored the children of Moses Brown (co-founder of Brown University), who later sponsored Scott’s travels. A 1798 edition of his Journal is part of David’s collection. It belonged to Joel Lean, who ran a Quaker school at Fishponds just outside Bristol in the early nineteenth century, where Francis Fry (chocolatier, bibliographer and Quaker) was taught. Lean’s book label may be seen below. The collection is a significant addition to the Library’s existing holdings of religious material, which includes early medieval manuscript Bibles, libraries of local churches and cathedrals, and archives of East Anglian religious institutions. The contribution its books will make to scholarship in the coming years is a fitting memorial to their donor, who will be remembered fondly by his colleagues for many years to come.

The display will be on view in the Library’s Entrance Hall until Saturday 29th July during normal opening hours. 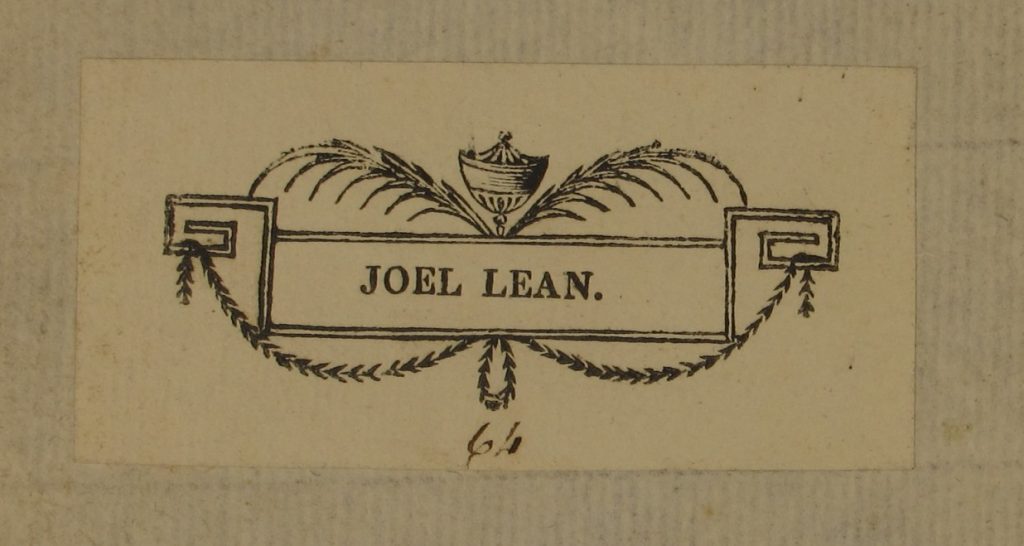