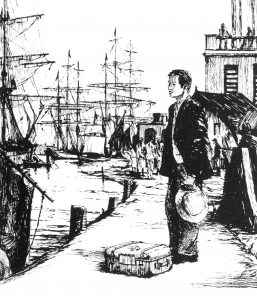 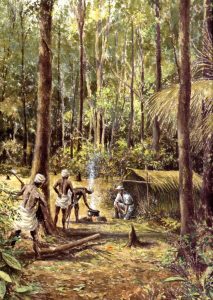 The Royal Commonwealth Society Collections are very grateful to former planter John Weatherstone for another donation of beautiful artwork to add to his collection of archives relating to the history of early tea and coffee cultivation in India and Ceylon [Sri Lanka].  Weatherstone had worked upon tea plantations during the 1950s, and later wrote two books examining the industry’s first establishment and later development in India and Ceylon.  They document the experience of the pioneering planters and discuss all aspects of the industry from harvesting and processing to transportation, finance, marketing and changing patterns of consumption. 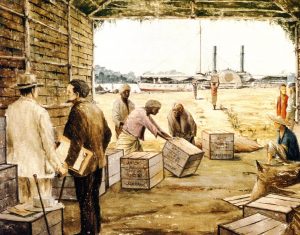 Weatherstone’s books were splendidly illustrated with a rich variety of historical and modern prints, photographs, plans and maps.  They featured specially commissioned works from the artist Sidney Fever.  The latest gift from Weatherstone includes seven more items, including five original works by Fever.  A sketch dramatises the arrival of one of the many young men from Britain who were recruited to work on the Assam tea plantations in the late 1840s.  A watercolour illustrates a rough talipot palm hut, which often was the only shelter from the elements and wild animals enjoyed by pioneer planters before a more comfortable hut or log cabin could be built.  There is also a recreation of one of the Assam Company tea store-houses established at Gauhati along the river route to north-east Assam during the 1840s: a government official converses with a company agent, while tea is being loaded onto a steamer in the background. 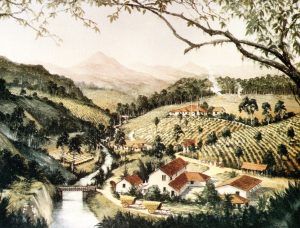 Other watercolours illustrate carts pulled by Indian humped bulls in Ceylon, which provided transportation before the advent of the railway, and a reconstruction of an typical tea factory on the island circa 1890.

These exciting new acquisitions have been added to the on-line catalogue of the John Weatherstone collection, RCMS 365. 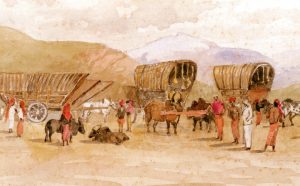