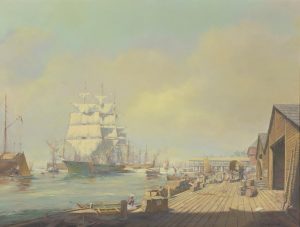 The Royal Commonwealth Society Library is thrilled to have acquired a beautiful historical painting from John Weatherstone, who has already generously donated much of the other original art work and photographs which illustrated his two histories of the early tea and coffee industries.  This oil on canvas, commissioned from the marine artist Sidney Fever, depicts the tea clipper ‘The Tweed’ about to sail from Colombo Harbour on 8 April 1888, where she had called during her voyage from China to New York.  Weatherstone meticulously researched the ship and harbour in contemporary plans, prints and photographs to ensure the painting’s authenticity, and his list of sources is filed with the collection. 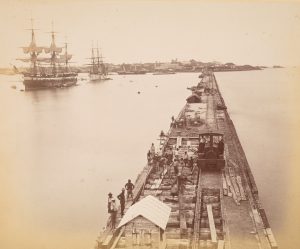 Construction of Colombo harbour during visit of Princes Albert Victor and George, 1882, Y303C_15

‘The Tweed’ began life as the armed paddle steamer ‘Punjab’, built in Bombay and launched in 1854, serving in Persia and the Indian Mutiny.  In 1862, she was converted to a fully rigged sailing ship with the removal of her paddle and guns, and renamed ‘The Tweed’.  Sadly, this was to be the ship’s final voyage, for she was dismasted in a gale off Algoa Bay in July 1888, and broken up soon after.  The painting looks out across Colombo Harbour east-north-east from the Old Customs Sheds, with Tamil dockyard workers loading tea chests and other cargo into lighters.  The harbour had been built between 1875 and 1883, providing safe anchorage behind its three breakwaters for approximately 50 ships.  The RCS has already published on Cambridge Digital Library a fascinating contemporary photograph album documenting its construction (Y303C).  During the final decades of the nineteenth century, the Great Ceylon Tea Trade, mainly shipped from Colombo, would replace the import of tea from China.  The painting too soon will be made accessible on Cambridge Digital Library.