Absence as Evidence: Recovering the Losses in an Eighth-century Gospel Book

Posted on 11 August 2017 by Special Collections

“Noli me tangere” (do not touch me, John 20:17), reads the final line of the endmost surviving page of Cambridge University, MS Kk.1.24—a poignant accident in a manuscript that has suffered a long history of heavy and destructive handling. Kk.1.24 is an Insular gospel book from the eighth century, probably made in Northumbria given its similarities with Northumbrian manuscripts such as the more famous Lindisfarne Gospels (British Library, Cotton MS Nero D. IV). But unlike its splendidly intact cousin, Kk.1.24 has been reduced to only mutilated fragments of the gospels of Luke and John. A previous blog post already discussed what survives of this manuscript, but there is also much to be learned from what doesn’t survive. Absence is itself a form of evidence, and the absences in this manuscript can help to reveal its story.

One of the manuscript’s most striking absences is the loss of its decorative scheme. Insular gospel books are renowned for their artistic brilliance, but aside from a few flourishes and dots on minor initials, there is no decoration left in Kk.1.24. Yet there are still clues that allow us to reconstruct what was lost. The most evocative evidence is on fol. 192r, which begins with the text of John 1:18. The first seventeen verses of the Gospel of John must have occupied the previous leaf, fol. 191, but this has been cut out. This is particularly frustrating because on the first leaf of each gospel, the opening letters (the initials) are usually enlarged and decorated, and sometimes accompanied with display script, a frame and other artistic elements. But despite this loss, careful examination reveals the lingering ghost of the missing initials—it is just possible to make out the faint impression on fol. 192r of the decoration that once stood on the neighbouring leaf. Fol. 192r must have lain beneath the lost leaf when the artist/scribe firmly drew the decorated initial, so that the drawing left its imprint on the layer of parchment below. The resulting impression not only gives us a glimpse of what the lost initial looked like, but it also tells us about the manuscript’s sequence of production—clearly the pieces of parchment were all gathered together into their final structure before the drawing and writing were done. 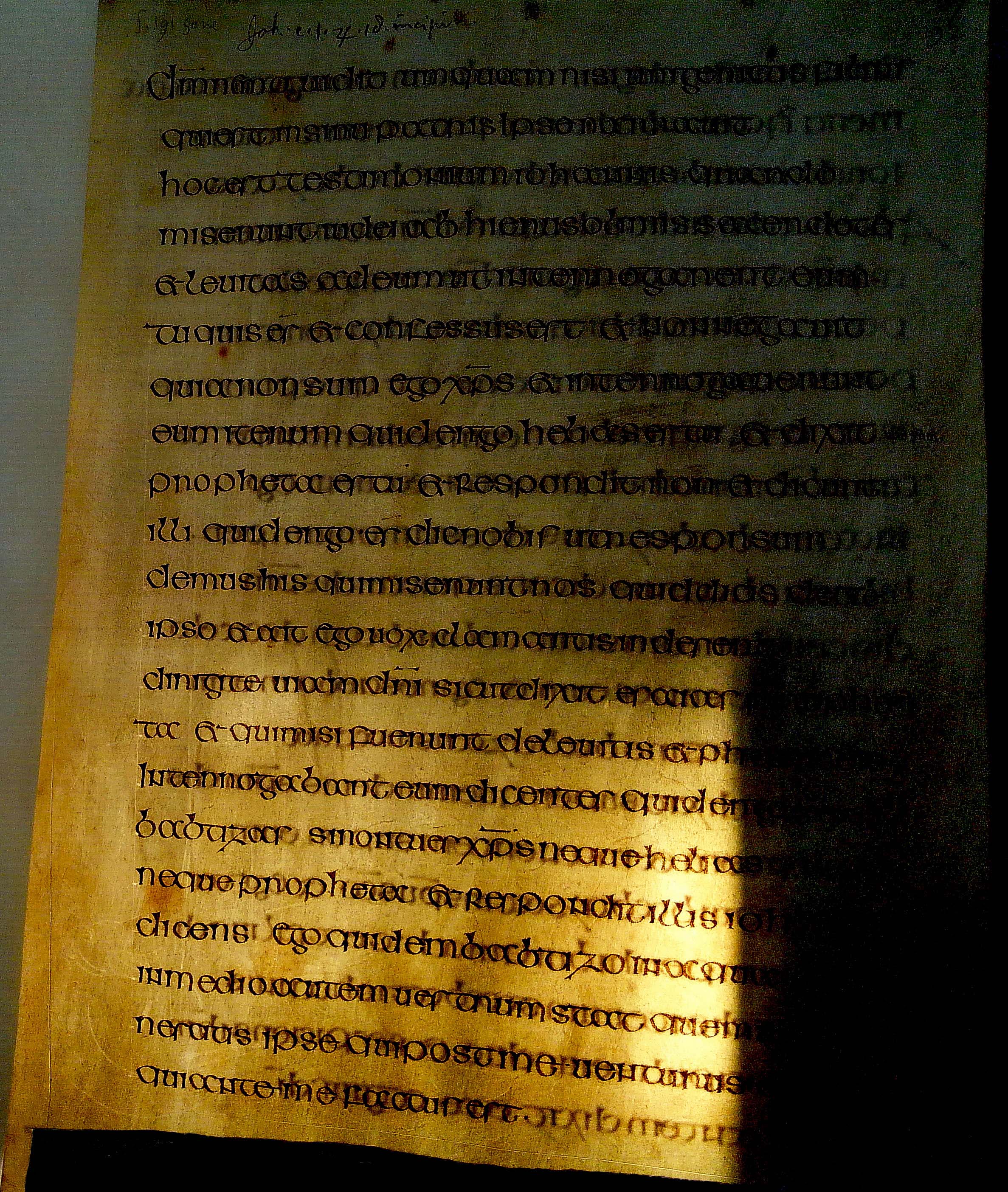 The preserved impression shows that the lost initial was the height of the entire page. The tall ‘I’ of ‘In principio’ (the opening words of John’s gospel in Latin) appears to have been surmounted by a knot of interlace and to have curved backward at the base, ending in a dragon-like head that turns with open jaws and an extended tongue towards the letter. Originally this lost initial must have looked much like that on fol. 37r of the gospel book Durham Cathedral Library, MS A. II. 16, which closely parallels both the general design of the Kk.1.24 initial and the unusual spiral feature at the back of the beast’s head. Otherwise, with its broad and clearly delineated muzzle, rounded features, gently parted jaws and small high-set eyes, the dragon-head in Kk.1.24 is closer to the creatures in the Durham Cassiodorus (Durham Cathedral Library, MS B. II. 30), especially those on the terminals to King David’s throne on fol. 81v. These manuscripts also share other features with Kk.1.24. For example, A. II. 16 is marked up for liturgical use in a similar way with superscript ‘I’s and ‘C’s to mark the words spoken by Christ and by a narrator (see previous post). Further, the renowned palaeographer E. A. Lowe considered the script of the Durham Cassiodorus to be the closest comparison to that of Kk.1.24. While we do not know exactly where they were made, both manuscripts are firmly associated with eighth-century Northumbria so that these similarities further situate our manuscript in this context. 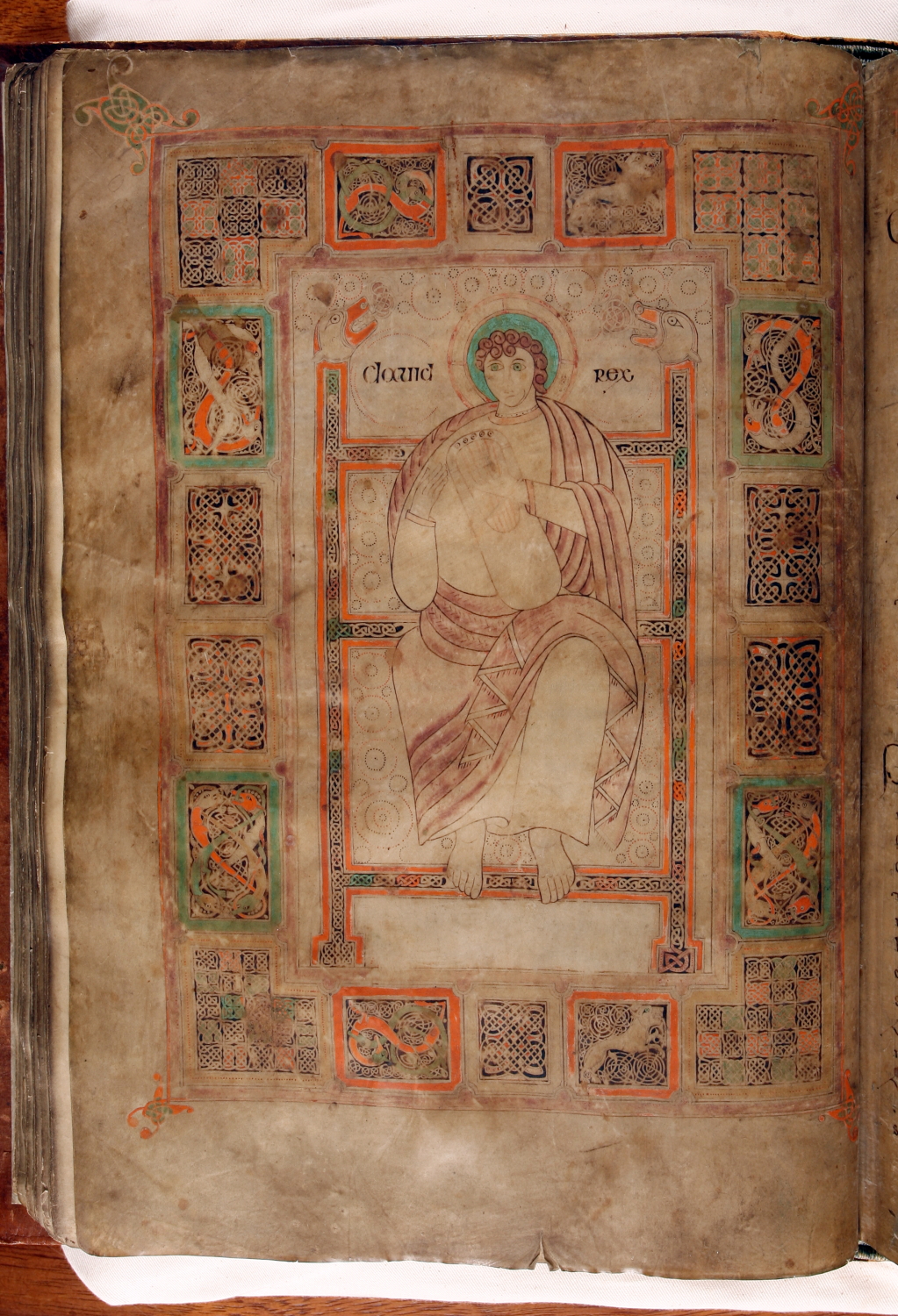 Another trace of drawing also survives in Kk.1.24, giving us additional insight into the manuscript’s lost decorative scheme. Just before the impressed initial on fol. 192r, on the narrow stub of parchment where fol. 190 has been cut out, there are the remains of plant motifs drawn in red ink, one at the bottom of the page and another just over half-way up. Clearly this was once another decorated page. At this point in a gospel book, between the end of the Gospel of Luke and the beginning of the Gospel of John, it is usual to find a full-page evangelist portrait of John introducing his gospel text. Yet since these foliate motifs look like nothing that was produced in eighth-century Northumbria, they cannot have been part of an original evangelist portrait. So what are they? 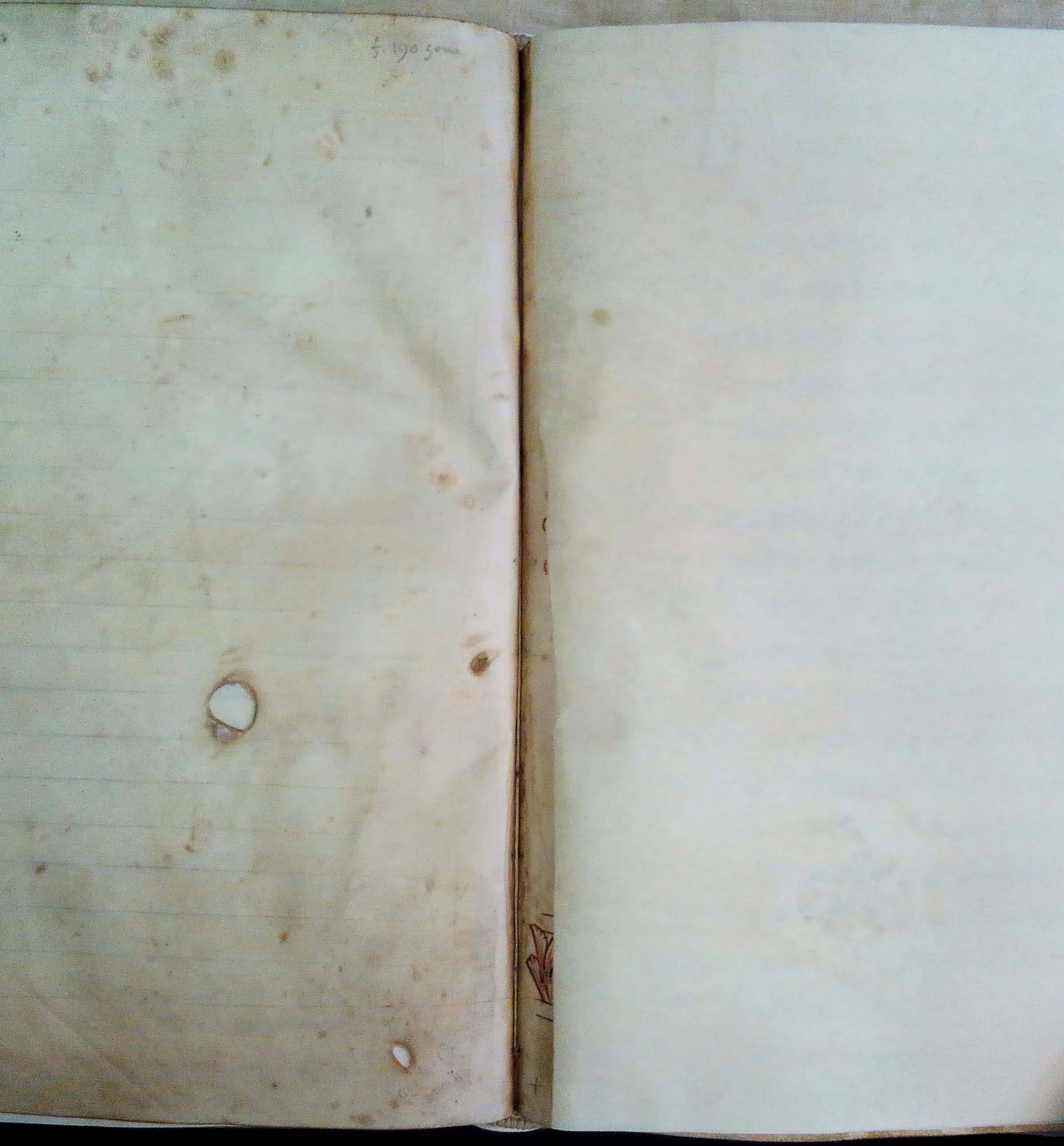 These drawings look like simpler line-drawn versions of a type of architectural frame with foliate bases and capitals that was sometimes used in Anglo-Saxon manuscripts of the tenth century, for example the Benedictional of St Æthelwold, fol. 56v (BL, MS Add. 49598), and the Trinity Gospels, fol. 17r (Cambridge, Trinity College, MS B. 10. 4). Further, the leaf with the foliate drawings in Kk.1.24 is one half of a bifolium that is separate from the original structure of the manuscript (along with its conjugate, the blank leaf fol. 189). We know that Anglo-Saxon artists sometimes updated old gospel books by adding new evangelist portraits alongside the originals, as in British Library Add. 40618, and Royal MS I. E. vi. And we know that Kk.1.24 was owned and treasured by the community of Ely Abbey in the tenth century, because they added texts about the abbey’s estates to the final leaf (now divided in two and separated from the rest of the manuscript in the Sloane and Cotton collections in the British Library), a practice that indicates that the manuscript was considered the safest and most sacred place to preserve the community’s most important documents. This evidence all adds up to suggest that the lost leaf with the plant decoration most likely contained an additional evangelist portrait created by tenth-century Anglo-Saxon artists, and probably intended as a pious renovation of the cherished manuscript.

From these traces of lost decoration, it is therefore possible to reconstruct two phases of decoration in this fragmented gospel book. The original phase, executed in eighth-century Northumbria, consisted of elaborate decorated initials to each gospel. It possibly also included evangelist portraits since there are severed stubs at the beginning of both surviving gospels that could have contained miniatures (the lost leaves fols 121 and 188). A second phase probably took place in tenth-century Ely, which most likely involved adding new evangelist portraits to each of the gospels as well as the estate documents at the end of the manuscript. This reveals a story of the continuing use and developing significance of the manuscript over at least two centuries. Both phases were then almost entirely obliterated in the early modern period when someone systematically went through the manuscript cutting out every decorated page. Such destruction reminds us of the staggering losses of cultural achievement that have been suffered throughout history. Yet Kk.1.24 demonstrates that despite all, with a little detective work it is possible to catch a flash of former glory in even the most unpromising of places.

If you are interested in more digitised Anglo-Saxon manuscripts, keep an eye on the Durham Priory Library Recreated digitisation project. We are very excited to see the Durham Cassiodorus online for the first time, and we are promised more to come!