Englishing the Papacy: The Liber Pontificalis and MS Kk.4.6

A guest post from Thomas Langley, who completed his MPhil on wealth and authority in early medieval Italy in 2017, and has continued studying at Cambridge for a PhD on the idea of the city in fourth-century Greek culture.

Tensions between national and supranational identities may occupy headlines at present, but they are not uniquely modern.  For example, Cambridge University Library MS Kk.4.6 – a twelfth-century copy of the Liber Pontificalis from Worcester Cathedral Priory – bears witness to the re-shaping of an important compilation of papal history to suit the interests of an English readership. 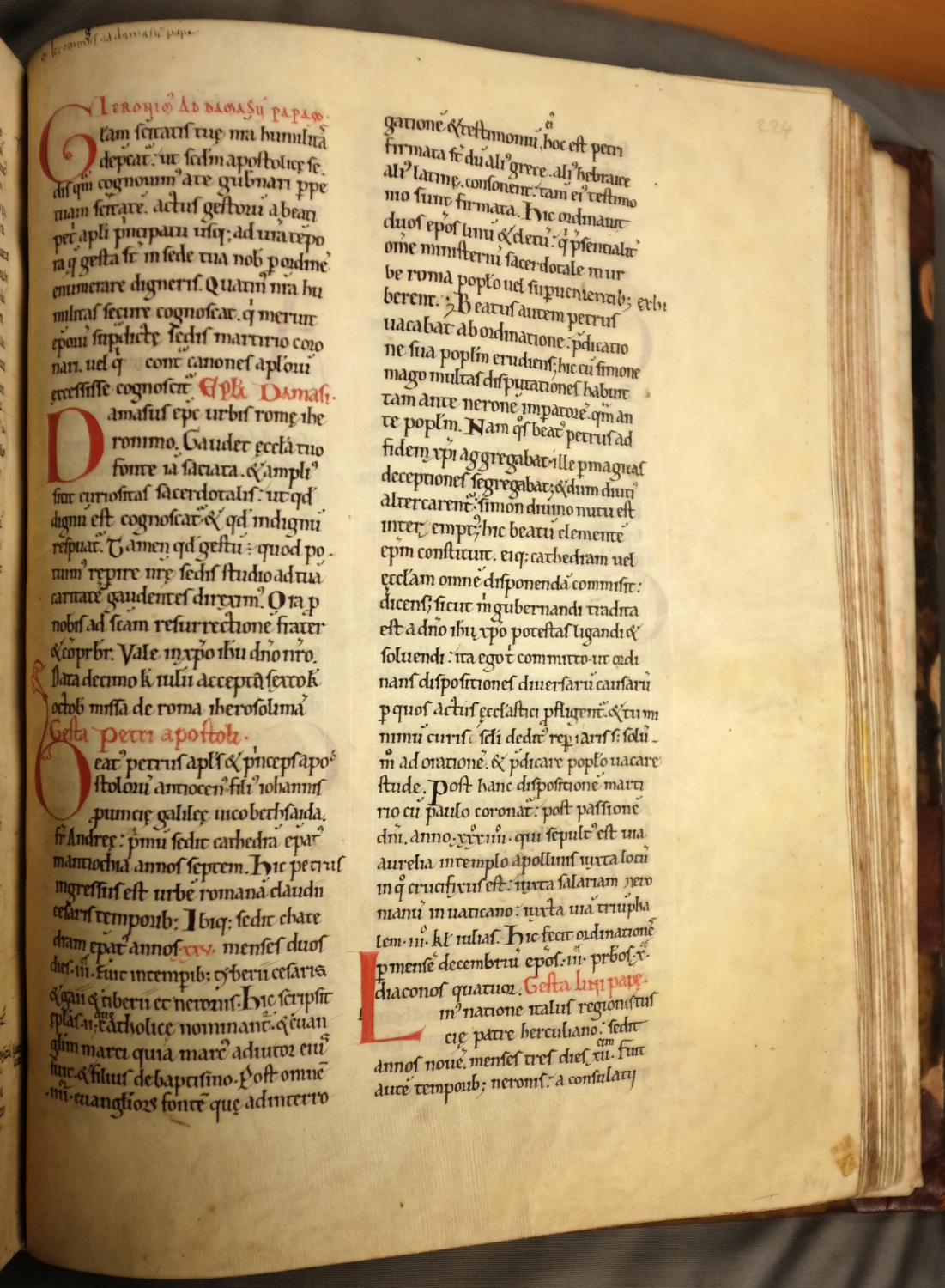 The Liber Pontificalis (literally ‘Book of Pontiffs’) was a very popular text in medieval Europe.  It comprises a collection of lives of popes, covering the incumbents of the papacy from St Peter until the last years of the 9th century.  In its original form, it was thoroughly centred on Rome, only commenting on outside events when relevant to local, papal affairs.  However, MS Kk.4.6 contains a version of the Liber Pontificalis that deviates significantly from the standard version.  The papal lives are often abbreviated and are heavily influenced by English, and specifically Saxon, concerns (the foundation of Worcester Cathedral Priory during the time of the kingdom of Mercia, might account for this Saxon twist to this manuscript’s contents). 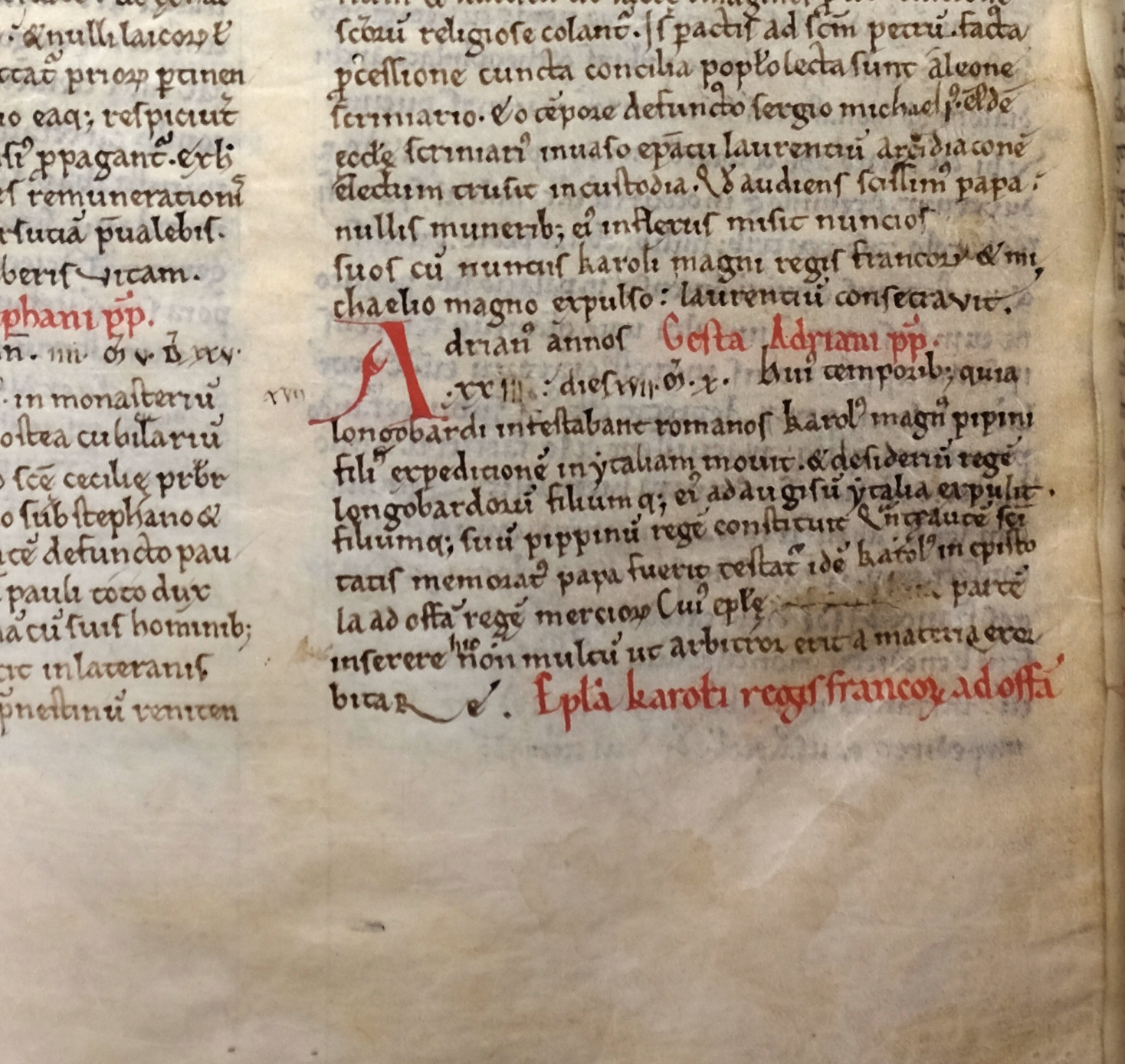 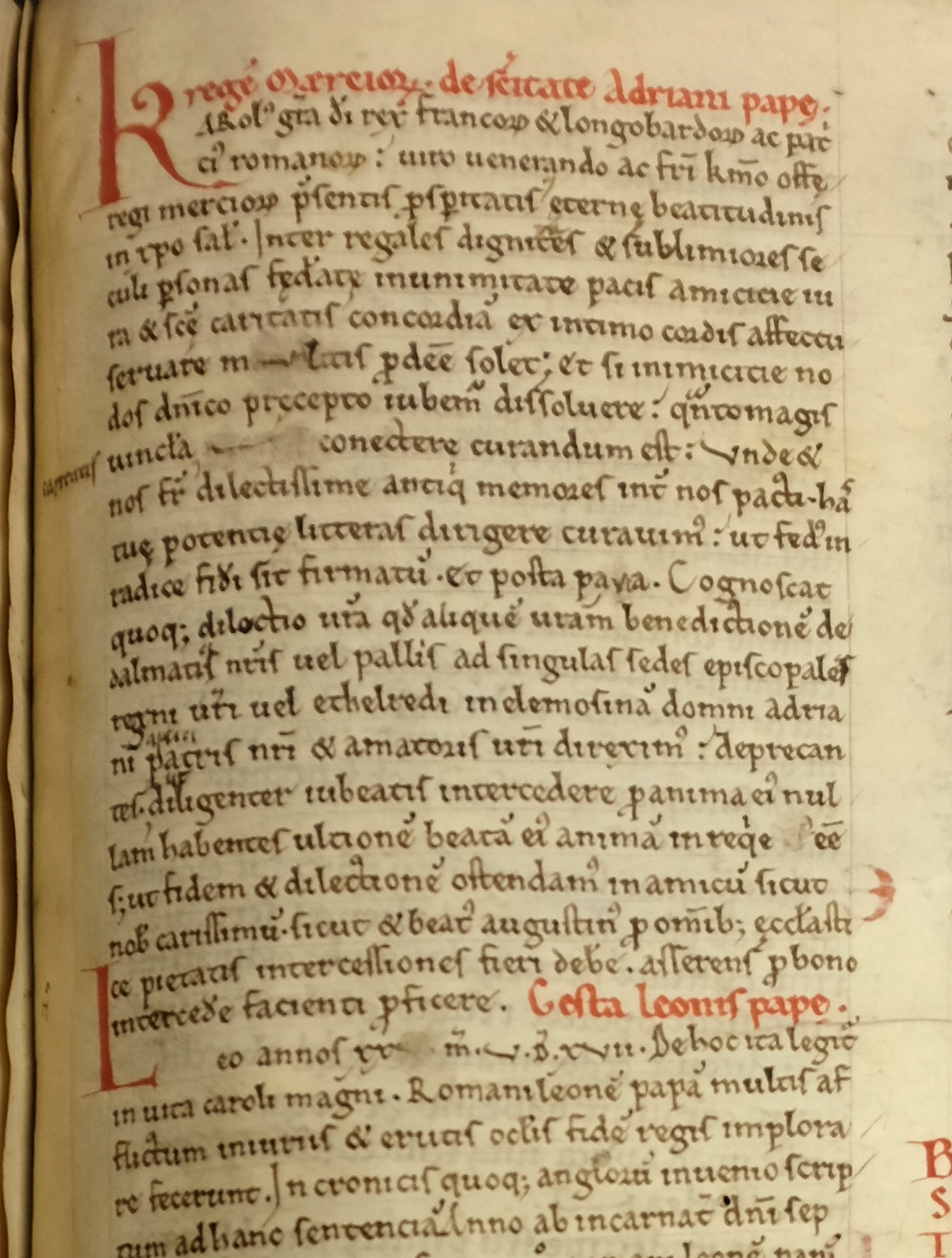 For instance, many of the later biographies owe their principal or only content to copies of letters that the popes in question sent to various individuals in England, often from the Saxon period.  Pope Hadrian (reg. 772-795) in the Liber Pontificalis proper has the second-longest biography, but in MS Kk.4.6 his life is mostly replaced by a copy of a letter of Charlemagne to King Offa of Mercia.  Pope Formosus (reg. 891-96) is the only entry of any length in a sequence of some twenty popes who receive no acknowledgement besides their names and dates, and the entirety of his biography covers his dealings with King Edward the Elder of England.[1] 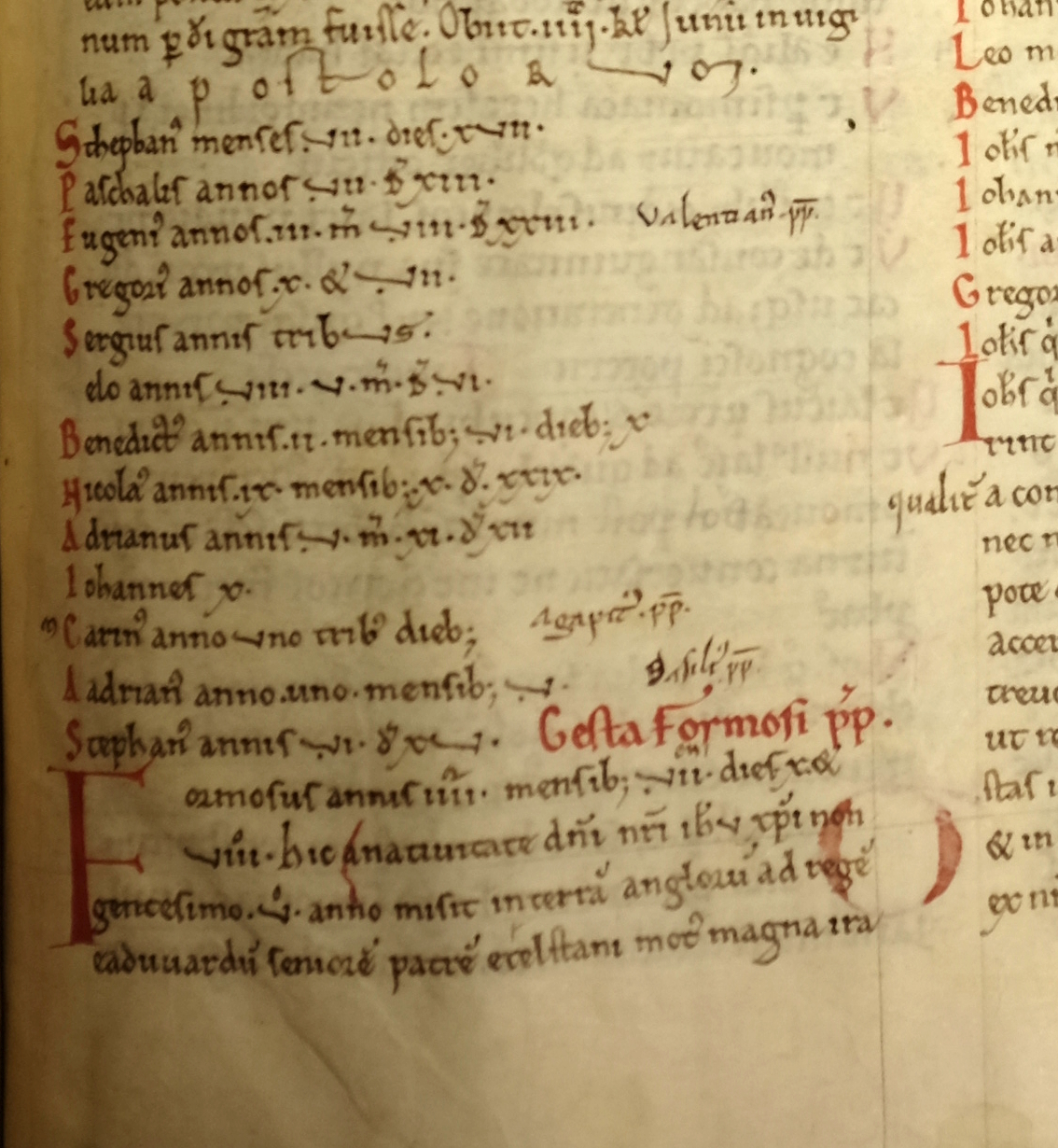 Some of these additions appear to be of generic Christian interest.  The compilers added in the law of the Roman emperor Theodosius against heresy, and added more detail to the life of Pope Gregory the Great (reg. 590-604) in the margins.  Yet the majority have a clear ethnic or national purpose and reflect a wider trend in medieval Europe to adapt the contents of papal biographies to reflect local interests and biases.[2]  The original handwriting in the manuscript has been attributed to John of Worcester, a monk at the cathedral priory, who also composed several other works on both English and general history.[3]  The combination of English and universal history exhibited by the Liber Pontificalis exemplifies, then, the linked desires to situate the English past within a universal history, and to make that universal history relevant to local concerns. 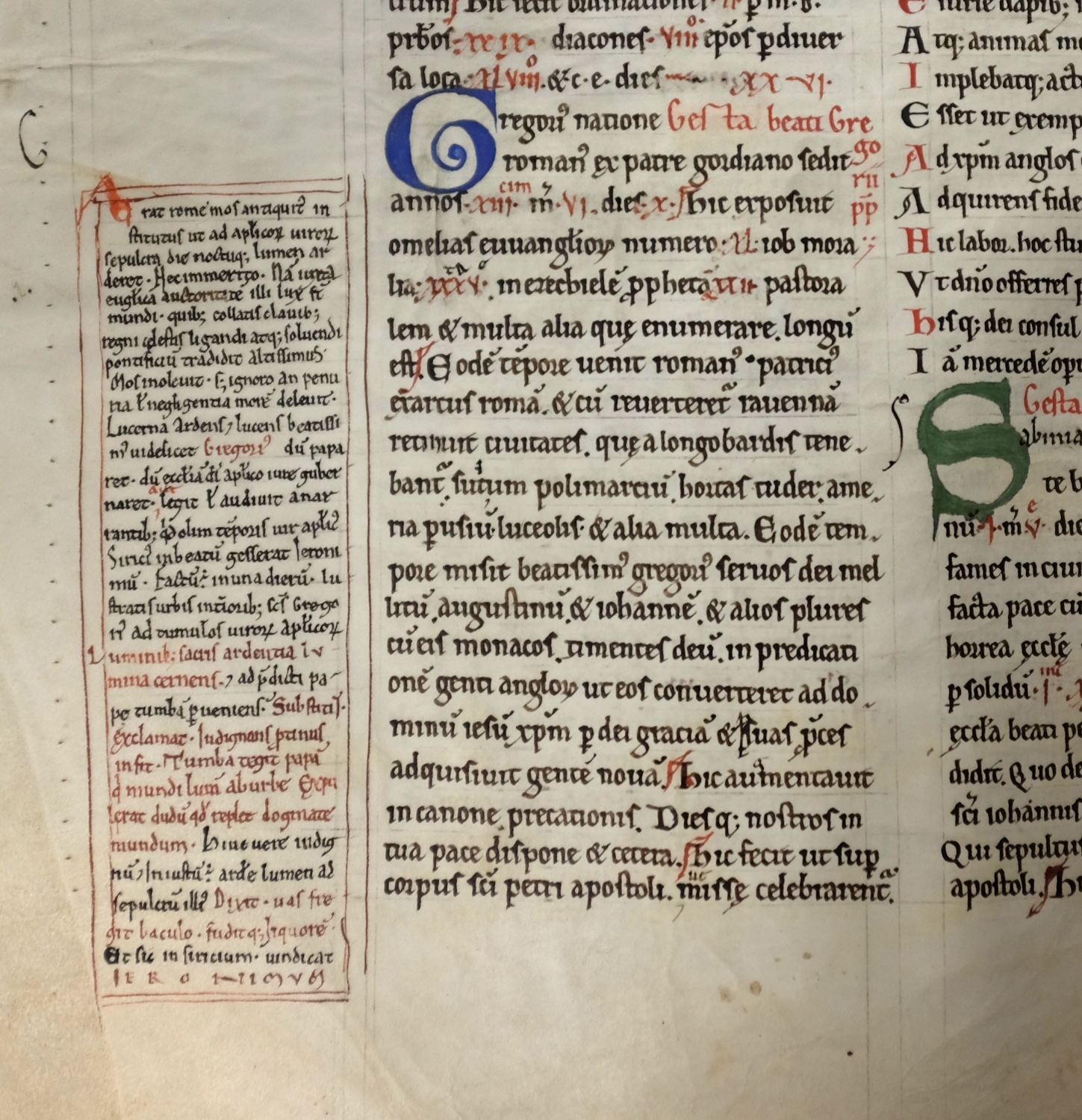 This Anglocentrism is revealing of a particular attitude to the Saxon past.  Despite being compiled in the Norman period, the additions to the manuscript concerned themselves substantially with a past stretching back far beyond 1066.  As a Saxon foundation, the cathedral priory likely had access to many of the texts which the manuscript’s compilers added to the papal narrative.  The text therefore not only suggested the significance of local concerns by relating them to a master narrative of Christian, papal history.  It also suggested the sanctity and significance of the Saxon past in relation to this history – and therefore elevated by association a foundation that which could claim Saxon ancestry. 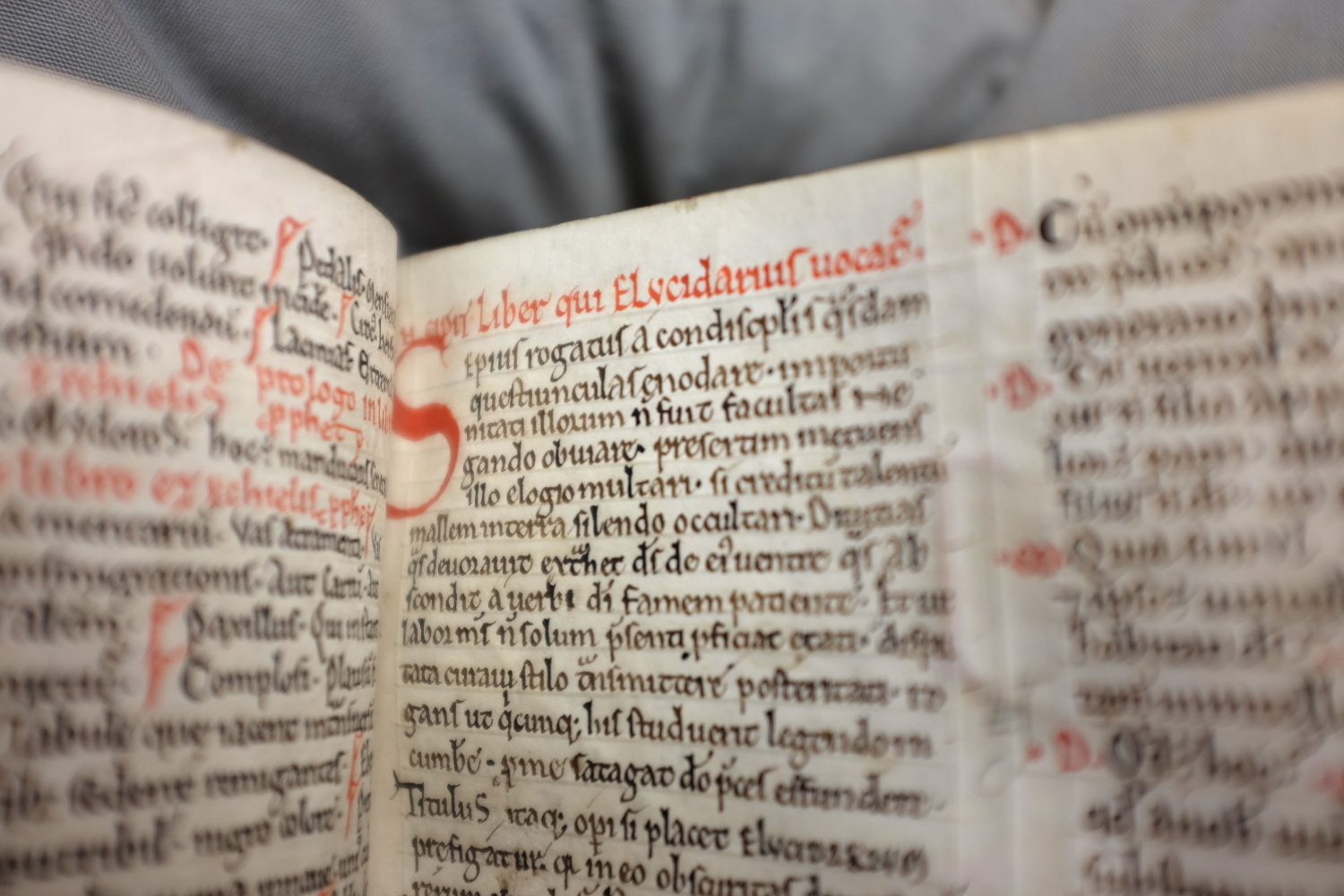 There are other ways to interpret this manuscript, however.  Many of the contents are discernibly late antique (c. 300-600) and Italian in origin, including the Liber Pontificalis itself.  The text also fits into a wider interest in late antique history.  However, the inclusion of other texts problematizes the notion that the purpose of this manuscript was primarily historical.  MS Kk.4.6 also contains the Elucidarius of Honorius Augustodunensis, a collection of questions and answers on theological matters that was popular in the twelfth century.  Other texts include  allegorical interpretations of Scripture and commentaries thereon by Bernard of Clairvaux and Hugo of St Victor, and a short collection of extracts from St Augustine, Isidore of Seville and other patristic writers. 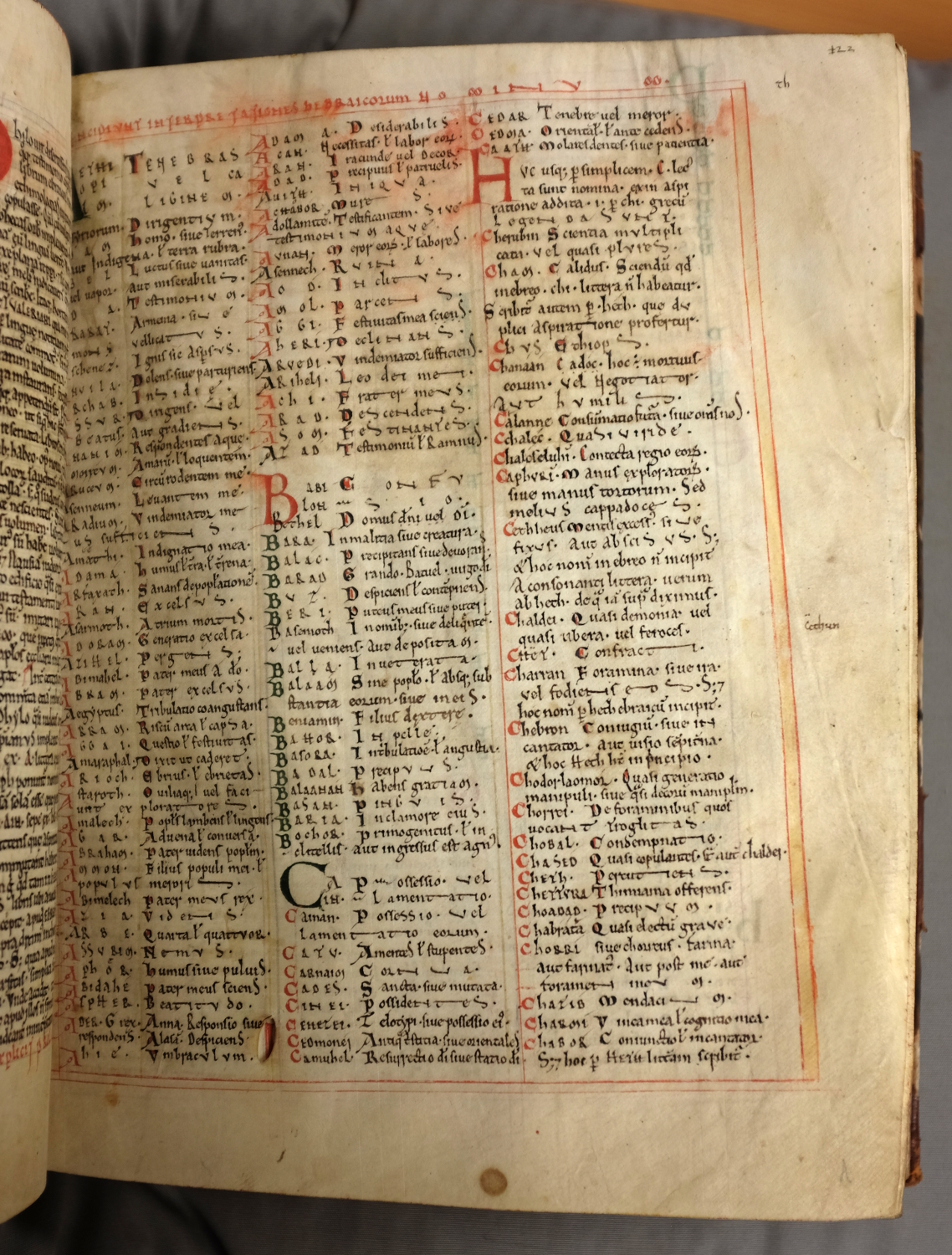 This diversity makes it difficult to see any rationale or plan for deciding what went into the manuscript, with historical, educational, and more serious theological functions all conceivably possible.  Physical evidence of its production suggests a functional rather than particularly aesthetic purpose: frequent marginalia in the Liber Pontificum, vellum of inconsistent quality, and a paucity of decoration (except for simple coloured initials to mark out textual divisions).  The manuscript’s size (it measures 340 x 270 mm and contains 280 leaves) reflects its textual capaciousness, and perhaps its suitability and convenience as a home for a medley of interests.

This blog post arose from work done for a workshop hosted by Cambridge University Library on 30 June 2017 as part of a Deutscher Akademische Austauschdienst collaboration between the Universities of Berlin, Tübingen and Cambridge.

My thanks to James Freeman for his very helpful suggestions concerning the content and structure of this piece.