Out of Disorder came Order!

The 24th April 2019 saw the culmination of a four-month project to move approximately 49,000 German maps from Cambridge University Library Map Department to the new Library Storage Facility at Ely. The classmark for the maps is Maps.OSF.2(Maps.H.0103).

The maps in question are from the Deutsche Grundkarte 1:5000 map series, cover parts of Germany at a very large scale and date from (roughly) 1928 to 1992’ish. (‘Large scale’ maps like 1:5000 represent a relatively small geographical area, but show it in great detail). They were given to Cambridge University Library in 1993 by the Ministry of Defence Map Library. Cambridge University Library is one of the many academic and national libraries in Great Britain that benefit from MoD’s policy of distributing maps from their huge map collection when they are no longer required. 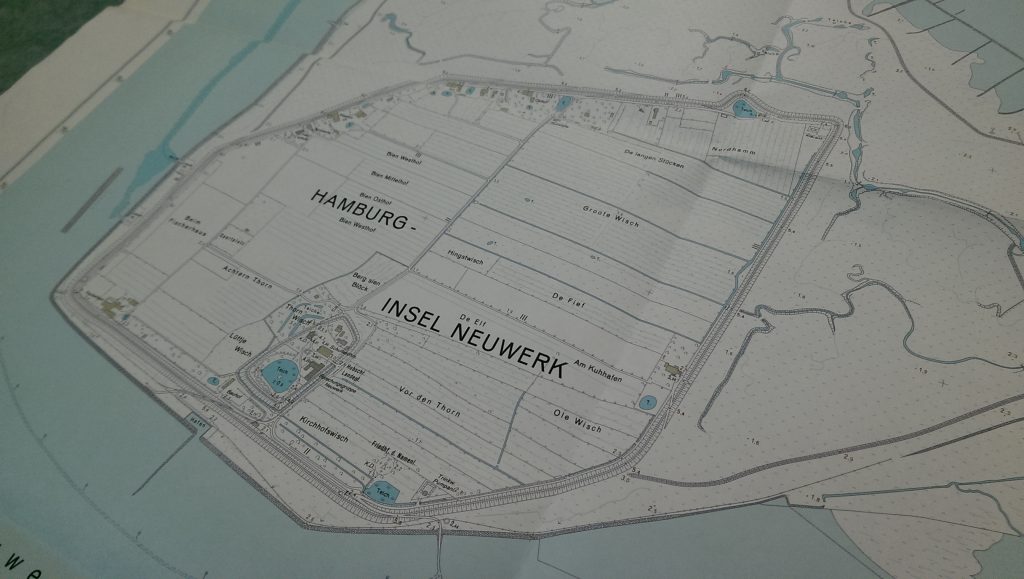 One of the Deutsche Grundkarte maps

Unfortunately, lack of suitable storage space at Cambridge University Library had meant that the maps had been largely inaccessible since that time. Until, that is, the opening of the Library Storage Facility (LSF) in Ely in early 2018 with, in addition to the 106 kilometres (or 65 miles) of storage space on about 30,000 individual shelves, some 600 new map drawers.

Space at last! But a logistical conundrum in terms of their transfer.

The weight of the maps was actually an advantage for Ely since the Library was required to add a specific weight of material to the Storage Facility within a given time-frame. In the end, the Grundkarte maps weighed in at 1,478 kg (3,258 lb).

So how did we go about moving the maps? It was such a monumental task, involving several teams, that it seems worth recording how we did it.

The maps had initially to be moved from the ground floor of the Library, up in a small goods lift, to the Map Department Reading Room on the first floor – a task mostly undertaken by our Map Department colleague Michael Taylor. 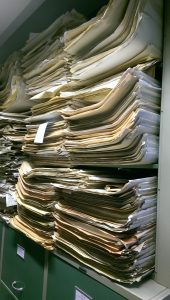 The maps before processing began 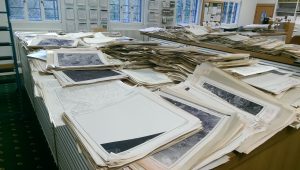 Maps in the Map Room – What Next?

It has to be said that the Map Department Reading Room did not look at its tidiest whilst this work was being undertaken!

The maps then had to be sorted. Each map has a sheet number consisting of eight digits in two groups of four (e.g. 2564 Rechts 5452 Hoch – click here for more detail on the sheet numbering).

It proved necessary to sort the maps in two steps, since it was impossible to keep alert to all eight digits. First, all the maps with the same Rechts number were put into stacks and once this was done, a second sort was undertaken to put the maps in each of these stacks in order by Hoch number. 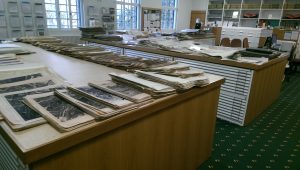 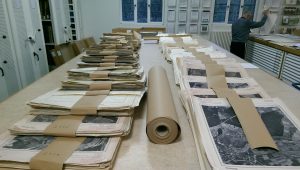 Only after they had been sorted were the maps carefully transferred to large boxes for transport to Ely.  Our Map Department colleague Ian Pittock helped Michael considerably with the sorting and boxing but, even so, it was nearly two months before the last box went to Ely. Many thanks are due to the Library’s Facilities Management Team for moving the boxes around the Library for us. 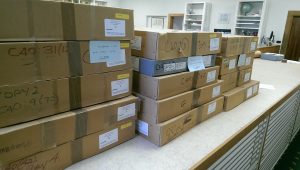 The next step took place in Ely and huge thanks are due to the staff at the LSF who took over the final processing of the maps, fitting this in round their normal duties as and when they could. This involved stamping the maps with a Library ownership stamp and the addition of a classmark (shelf mark) to each map, either using an ink stamp or, for the maps on photographic paper, sticky labels. Special thanks are due to Brian Hunter who undertook most of this work. 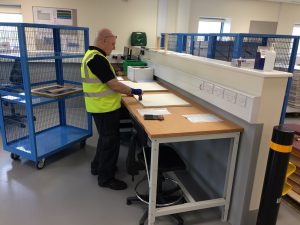 Brian at work in Ely stamping the maps

Several years ago Map Department staff had trialled the processing of some of the Deutsche Grundkarte maps and the maps from this trial had been stamped, classmarked and folded to be stored in boxes on shelves. The LSF staff unfolded these maps (the maps in each of the 99 boxes took about 40 minutes to unfold) and interfiled them with the previously unprocessed maps to form a single unified sequence. 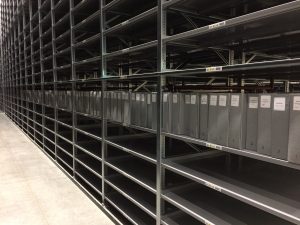 The previously processed maps waiting to be unfolded and interfiled 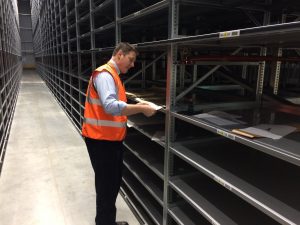 The maps were weighed, placed in drawers and the drawers labelled. 76 drawers were filled in total. 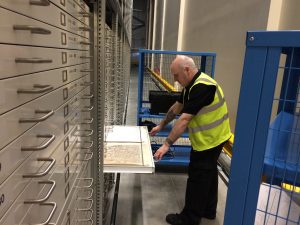 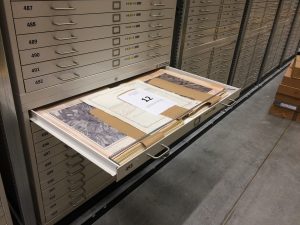 In common with most other map collections, Cambridge University Library Map Department does not catalogue the individual maps in a map series. Instead, there will be just one catalogue entry for the whole series. Individual sheets within a series are identified using a graphic index, or index map, that shows the layout and numbering systems of map sheets in that series. We very much wanted to mark all of our Deutsche Grundkarte maps on such a graphic index, but this proved to be too time-consuming. A project for the future!

What to do if you want to look at these maps

Sample Sheets: There are some sample sheets in Cambridge University Library (classmark Maps.H.0103); just ask Map Department staff. These will be useful if you just want to look at some sheets or if you want to see whether this type of map may be useful to you.

Specific Sheets: Because not all of the maps are marked on a graphic index (see Stage 7), Map Department staff will need to identify the map numbers that, if they exist, cover your area of interest and then ask the staff at Ely whether we have these sheets. The maps will then be transferred to Cambridge University Library Map Department for you to look at. 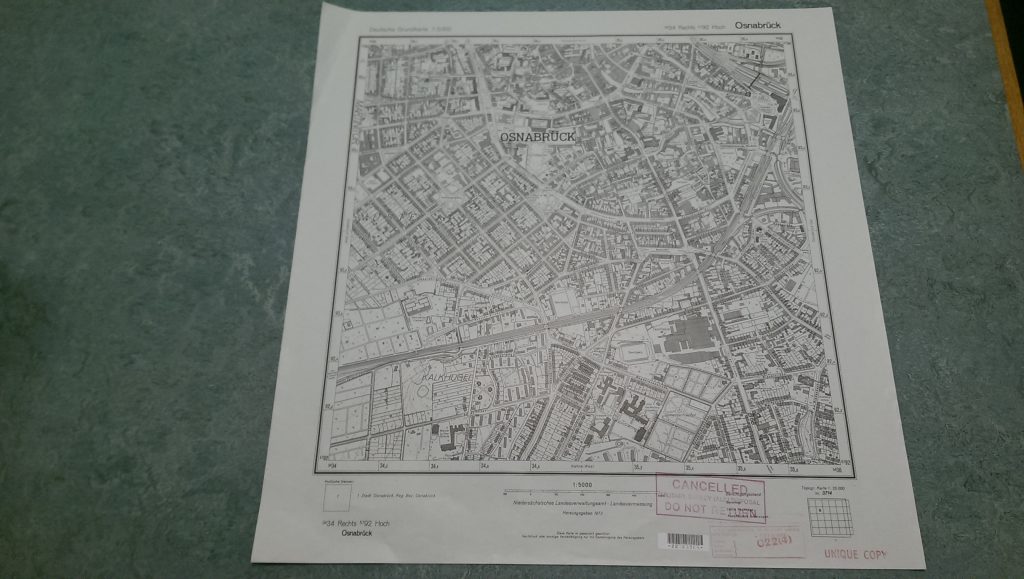 Not all of the Federal Republic of Germany was mapped at this scale, and we do not have all of the published sheets. States for which we have some maps include Baden-Württemberg, Nordrhein-Westfalen, Rheinland-Pfalz, Saarland, Schleswig-Holstein and Niedersachsen, Sachsen Anhalt and the former East German state of Sachsen. In addition there are a few sheets of specific areas of Poland and Lithuania.

For some areas we actually have more than one edition of a sheet, and sometimes we have different versions of the map for a particular area, e.g. normal line maps and photomaps (geo-rectified aerial photographs, some with text superimposed).

These maps provide a fascinating picture of parts of Germany at a far more detailed scale than is possible for Great Britain and are a wonderful addition to the collections.

Map piles after the initial sort and Job Done. Hurrah!!