From Cereal Box to Archive Box

In January 1994 Cambridge University Library’s Map Department received a large donation of maps from the estate of Kenneth Guy Messenger (1920-1993).

As well as making a list of these maps accessible via ArchiveSearch (see below), the Map Department has been re-boxing the collection. 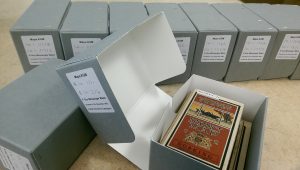 Guy was an avid recycler and, it seems, consumer of corn flakes (various brands) and Grape Nuts (“Bird’s Grape Nuts, crunchy wheat & malted barley breakfast cereal. Stays crunchy in milk”)! Boxes from the former were refashioned into slip-cases in which multiple maps could be stored; the latter were used in the same way with just the top removed.  We are retaining some of these boxes, but have now re-housed the maps in acid-free, conservationally sound archive boxes. 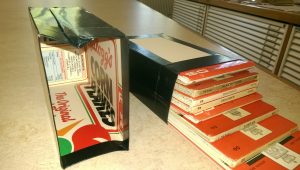 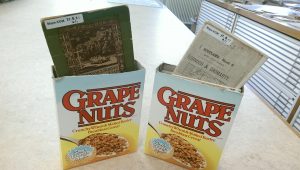 The donation included about 5,500 Ordnance Survey maps at scales of one inch to a mile (1:63,360), half inch (1:126,720) and quarter inch (1:253,440), dating from around 1836 to the early 1990’s and covering, at various dates, Great Britain and Ireland. The one-inch maps in particular are the sort of map that many people will have had at home and used regularly for walking, planning journeys, or studying the landscape.

The significance of the collection – which is kept at classmark Maps.KGM – is that Guy Messenger used it in his extensive studies of Ordnance Survey’s small scale map output, and it thus formed the basis of his many publications on the subject.  The collection has subsequently been used by other researchers, so references are made to the maps in numerous publications.

Although Cambridge University Library received examples of many of these maps on Legal Deposit, we tended, where there was a choice, to receive only the flat, unfolded copies which lacked covers. This is particularly galling for some of the District maps, which had particularly attractive, and much sought after, covers. In addition, we rarely received different printings (many of which incorporate minor amendments), military editions, or alternative formats. These failings are addressed with Guy Messenger’s collection, which provides a more comprehensive picture of the output of Ordnance Survey as well as giving a more complete picture of how the landscape has changed through time. Indeed, map covers are a popular research subject in their own right. (See, for example, John Paddy Browne’s Map cover art, and the photographic archive of Ordnance Survey map covers on the Charles Close Society website).

A listing of many of Guy’s maps was compiled several years ago by Roger Hellyer, a fellow Ordnance Survey enthusiast and scholar, but this was on a stand-alone database which was only accessible in the Map Department. Map Department staff have recently copied this data into the University’s Archives catalogue (and added some new records), where it is now accessible via ArchiveSearch. The listing includes sheet numbers (but not always sheet names) and graphic indexes (index sheets) for the map series can be found on the Charles Close Society website. There remain some unlisted maps, such as some 1:25,000 scale maps, which will be tackled as time allows.

Guy Messenger lived at Uppingham in Rutland, teaching biology at Uppingham School until his retirement in 1980. He remained an active botanist until his death, publishing a monograph on the flora of Rutland in 1971 and several contributions to Watsonia, the scientific journal of the Botanical Society of the British Isles. He was an early member of the Charles Close Society for the Study of Ordnance Survey maps (CCS), joining in 1981, and quickly turned the analytical and classification skills he had acquired as a botanist to his new passion of cartobibliography. He was the author of the first full length monograph on a twentieth century map series, The Ordnance Survey one-inch map of England and Wales Third Edition (Large Sheet Series), which the CCS published in 1988.

Click here for other books written by Guy Messenger.

February 2021: Note that ArchiveSearch replaced Janus as the University’s archive catalogue in February/March 2021. The text and links in this blog post have been updated to reflect this change. Tips on searching ArchiveSearch can be found on the Map Department’s web pages and in the ArchiveSearch LibGuide.