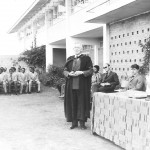 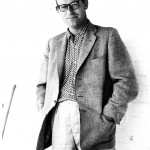 I am delighted to report that further to publication of Owain Richard’s post on the photograph collection of Peter Holmes Canham on 14 November 2012, the RCS collections have been sent two photographs of Peter Canham by Victor Sibanda, an old boy of Bernard Mizeki College in Zimbabwe.

The first photograph was taken at Bernard Mizeki College-Speech Day in 1963. Peter Canham was the school’s founding headmaster, having left Ghana and the Overseas Civil Service on Ghana’s Independence. He can be seen sitting on the chair (second from right) in black suit and sunglasses. The building behind is Kamungu Hostel.

The second photograph was taken at The Headmaster’s Lodge at the school and was labelled in the school album as Peter Holmes “Kwame” Canham. Victor explained that the name Kwame was an affectionate nickname Canham was given by the first group of students after he had told them he had come from Ghana to be Headmaster of Bernard Mizeki College. The name was taken from Kwame Nkrumah who had recently become the President of Ghana.