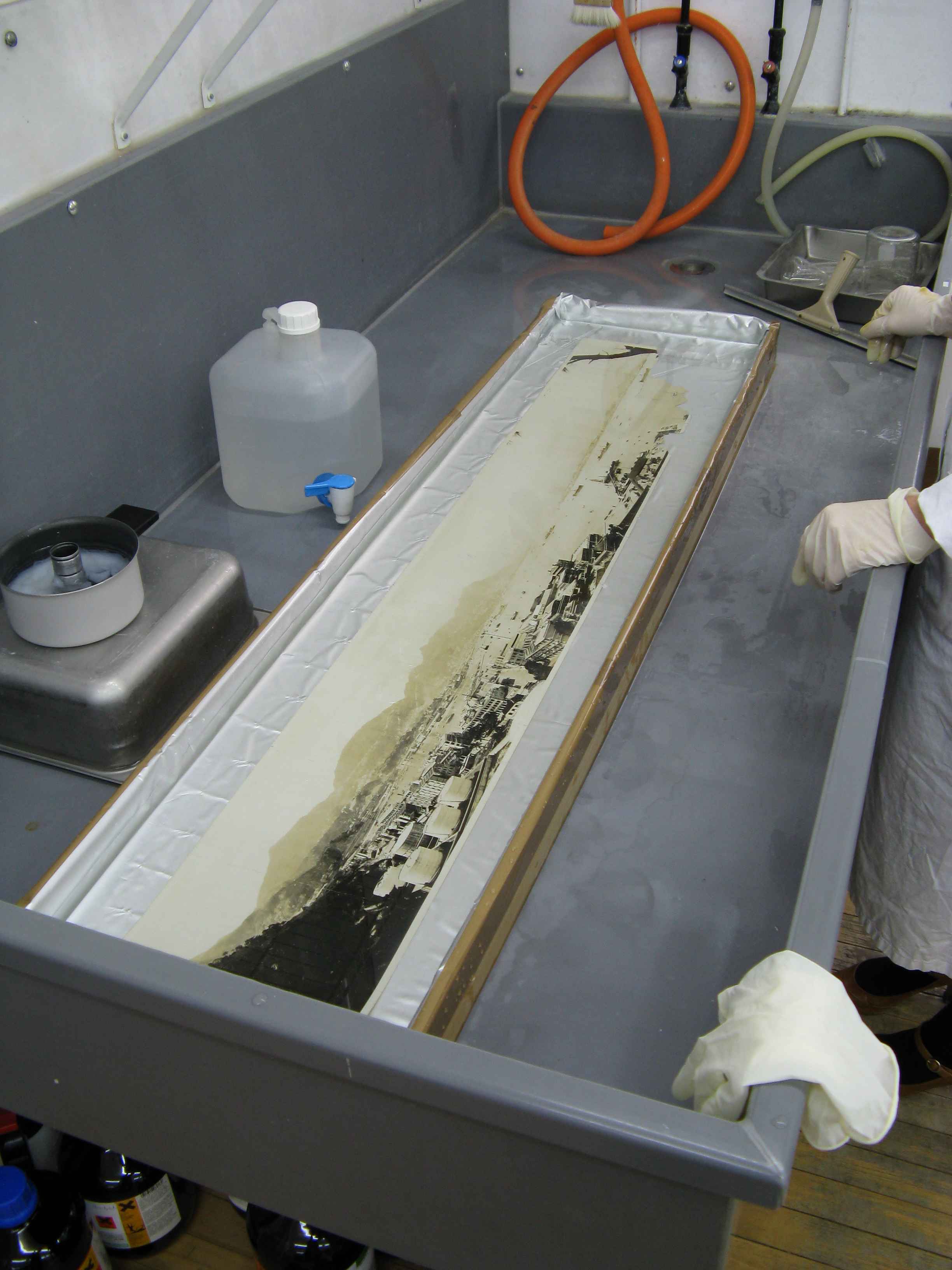 Six spectacular photographic panoramas of Hong Kong, taken c. 1900, were recently painstakingly conserved by Nicholas Burnett and colleagues at Museum Conservation Services at Duxford, along with one panorama of Macau, one of Canton, and one of Medicine Hat, Alberta, taken in 1913.

Unfortunately, the rolled panoramas had been stored in London in conditions which were too dry and had become brittle, so that it was impossible to unroll them without causing permanent damage.  Cracks had formed along creases, the ends most exposed to the elements had become dirty and small sections of photograph had been lost.  Early tears had been mended by sellotape, which had become acidic and degraded the photographic paper and there were also some small signs of insect damage.

The conservation process was a slow one, taking 21 months, as the rolled panoramas were first placed in a humidity chamber for periods varying from approximately half an hour to a few hours to relax the paper, before they could be unrolled and then slowly flattened between sheets of blotting paper under light weight for a period of months.  Cleaning came next, including washing.  In the gallery below you can see the panoramas of Hong Kong and Medicine Hat each submerged in a tank, and that of Medicine Hat carefully being conserved.  (Click on the images to enlarge them).  Finally eight of the panoramas were enclosed in inert, clear polyester sleeves and backed with acid-free card before being returned to Cambridge University Library where they are now stored flat in a plan chest.  The largest panorama, that of Medicine Hat, measuring just over two metres in length, was too large to store in the plan chest, so was very carefully and loosely rolled, and wrapped in acid-free fabric to keep dust out.

The panoramas before they were conserved

Showing dirt on surface of print

After flattening, showing creases and a tendency to curl

A panorama of Hong Kong after conservation (Y30383A/5)

Another panoramic view of Hong Kong after conservation (Y30383A/4)

The conserved panoramas may now be viewed in the Library’s Manuscript Room by appointment.  Please contact the RCS librarian to arrange viewing.