Posted on 2 December 2014 by Sophie Defrance 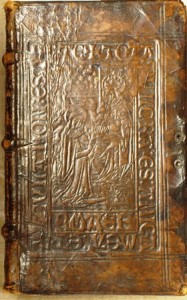 A previous post about the current exhibition in the entrance hall, Scribes and Printers, features recent acquisitions by the Department of Manuscripts. This post, in turn, describes the early printed books accessioned by the Rare Books Department.

The works displayed in the exhibition are fine examples of the most popular types of book printed in the first century after the invention of the printing press in Europe by Gutenberg. Religious publications were stimulated by the Reformation, while liturgical books intended for the laity were still extremely popular, and books of hours were now produced in greater numbers. Other popular books, answering to the growing academic needs of European universities included practical guides for those practising law and medicine. Beyond their subjects and method of production, the items in the case are also interesting because of their provenance: several of the Rare Books Department’s recent acquisitions were acquired in the ‘Mendham sales’, and some of these acquisitions are presented here. Joseph Mendham, who died in 1856, was an English clergyman and controversialist who collected books on theology. After his death, his collection passed to his nephew and eventually to the Law Society in Chancery Lane, London. Some of the most valuable items from the collection were sold by the Society in 2013.

Purchased with the assistance of a grant from the Friends of the National Libraries, and a donation from the Friends of Cambridge University Library, the Vocabularius utriusque juris (5000.d.118) is the earliest book in the selection, and is remarkable because of its signed binding. The only surviving copy of the 1515 Jean Petit edition of this reference law dictionary is bound in a brown blind-stamped calf binding over wooden boards. It has decorative plates picturing religious scenes on the covers: the coronation of the Virgin on the upper cover with the motto “Tota pulchra es Amica mea et macula non est in te” as framing and the binder’s signature (R. Mace) at the front of the panel. Although this is not currently on display in the exhibition, the fly-leaf in the back cover consists of part of a printed leaf of an incunabula on obstetrics.

John Fisher’s Assertionis Lutherane Confutatio (5000.b.20) was printed in 1523 in Paris and the book is an illustration of the religious tensions of the century. An important work by the English Cardinal and theologian who later became Chancellor of the University of Cambridge, the Assertionis Lutherane Confutatio is considered to be the first lengthy anti-Lutheran polemical work written by Fisher, who would dedicate the rest of his life to battling against heterodox teaching. The binding is particularly interesting, as it comprises, within its structure, part of a twelfth-century manuscript and part of a printed calendar discarded by its producer.  The book was also a working copy for his controversialist successor: it includes marginal notes and some biographical data by Mendham. 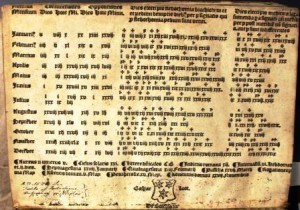 A discarded calendar in the binding of John Fisher’s Assertionis Lutherane Confutatio (5000.b.20)

The last two books include a beautiful book of hours: Ces presentes heures a lusaige de Reins toutes au long sans req[ue]rir  (5000.c.66). The almanac within covers the dates 1513-1530. According to the art historian Sandra Hindman’s research, Parisian printers produced more than 1,775 editions of books of hours between 1475 and 1600. This particular book is the work of the Parisian printer Simon Vostre, whose printing career began in 1486. Simon Vostre was one of the major bookseller-publishers, or marchand-libraires, of the day. His books, often produced in conjunction with the engraver Philippe Pigouchet, are renowned for the intricacy and delicacy of their illustrations, and the intricacy of their borders, which combine the latest developments in typography with the tradition of illuminated manuscripts.   The relief printmaking technique used to illustrate the books was almost entirely restricted to the period from about 1450 to 1540, and mostly to Northern Europe in the region around the Rhine, the Low Countries, France and Switzerland.  In the exhibition, the book is open at the scene depicting the Nativity.

The last –item – chronologically – is a Chartres Missal (5000.d.129) printed in Paris in 1544 and interesting in many respects. It was printed by a woman, Jolanda Bonhomme, who was the widow of Thielmann Kerver. Originally from Koblenz, in Germany, Kelver had settled in Paris in 1497 and married the daughter of Pasquier Bonhomme, an important bookseller who had published the first books in French to be printed in Paris in 1475. The opening in the exhibition shows Kelver’s printer’s device. The unicorn was the symbol of one of the houses on the Rue St Jacques owned by the Kervers. The provenance, or history, of this item is also interesting because it belonged to the seventeenth-century French scholar Etienne Baluze, Librarian to the Minister Colbert. His library was auctioned in Paris in 1719, where this was lot 2070. The University Library owns several other books that belonged to Baluze, including a recently-catalogued 1598 edition of the Essays of Montaigne. This missal also shows annotations by Joseph Mendham, giving us yet another glimpse into the mechanisms of a working religious library.

You still have a few days to see these early printed books which have recently found a new home, and a new history – the exhibition will close on Saturday 6 December.