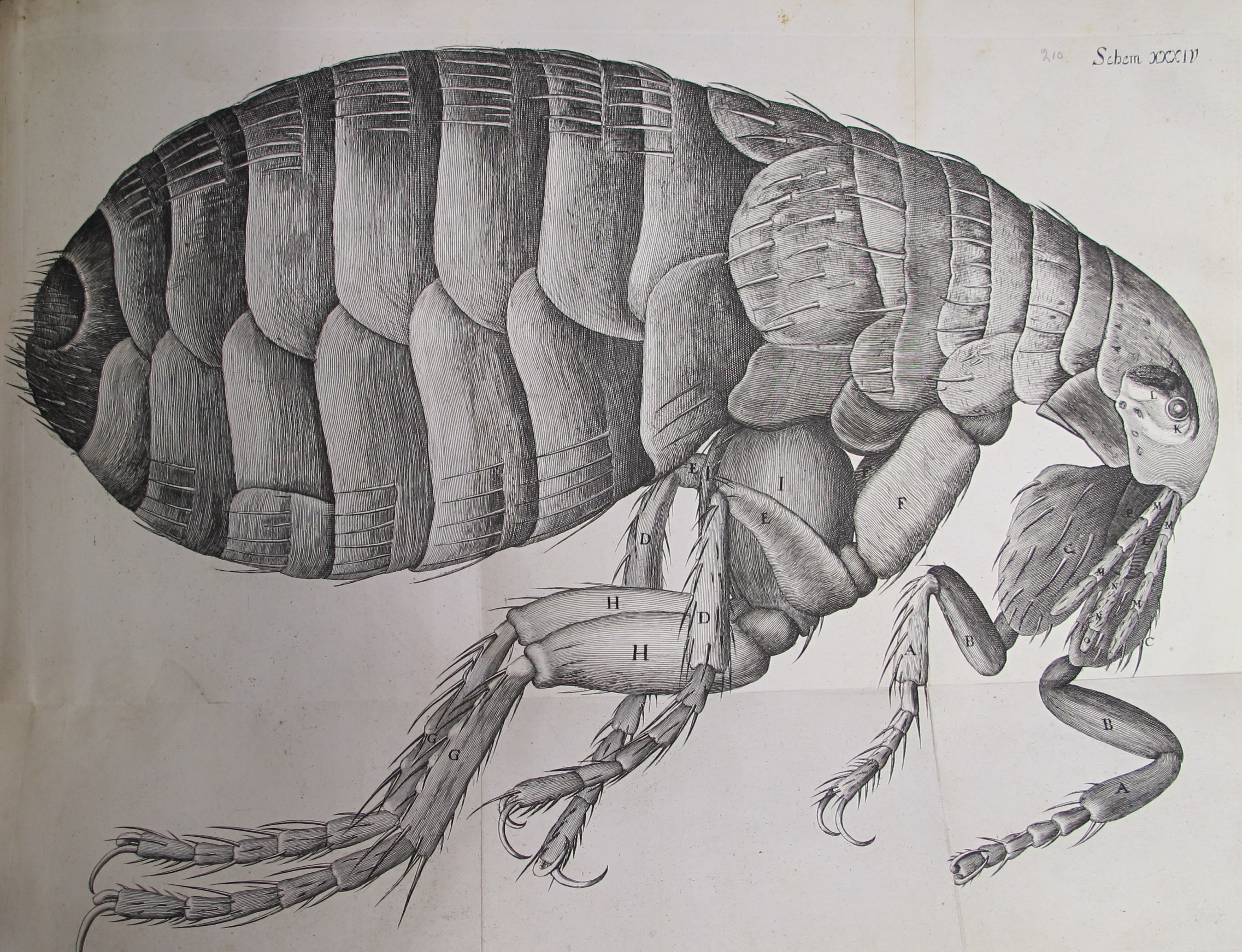 Robert Hooke and his Micrographia 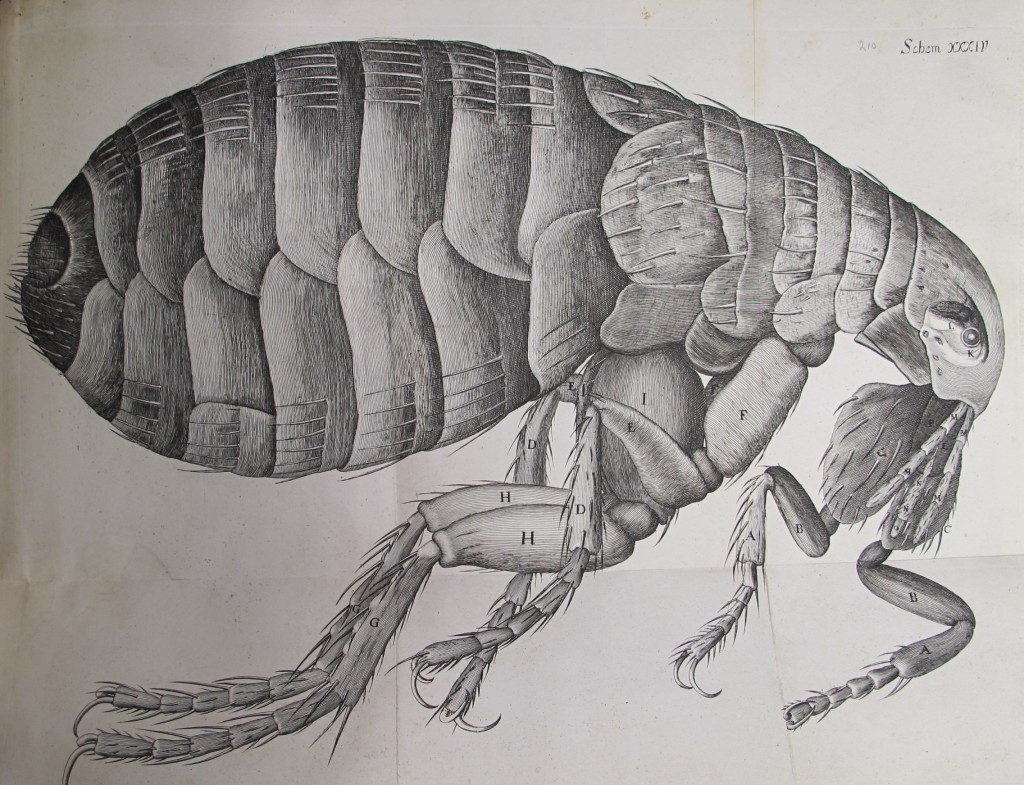 Folding plate of the flea from Hooke’s Micrographia (Keynes.S.7.21). The plate is almost half a metre long and over 35cm tall.

When Samuel Pepys strode through the City of London to visit his bookseller – a journey he made frequently – on 2 January 1665, he caught sight of a book which would change forever the way people thought about the world around them. In his diary that evening he wrote “[I] saw Hookes book of the Microscope, which is so pretty that I presently bespoke [ordered] it.” When he received his copy on 20 January he pronounced it “a most excellent piece…of which I am very proud.” The book was Robert Hooke’s Micrographia, the first English book dedicated entirely to the results of microscopic research. His pride presumably stemmed from the fact that the book had been printed by order of the Royal Society, of which he became a fellow just a few weeks later, rising to become its President in the 1680s. The book is now 350 years old and remains a cornerstone of English scientific thought. The Library’s two copies of the first edition will be on display in the Entrance Hall cases until 7 February, along with a selection of books from Hooke’s own extensive library. 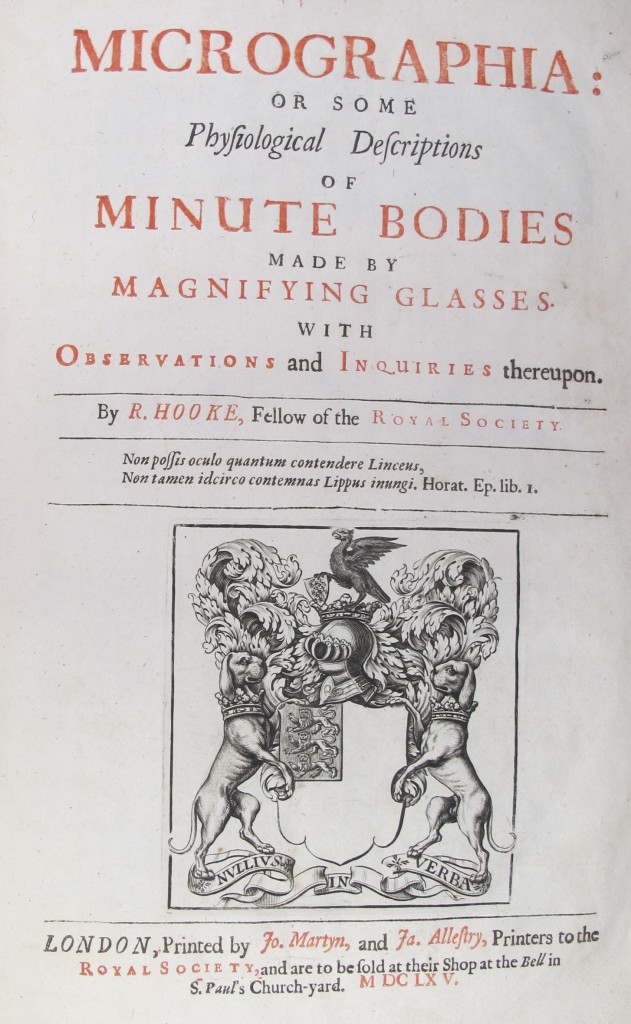 Title page of Hooke’s Micrographia (Keynes.S.7.21), with the arms of the Royal Society and its motto, ‘nullius in verba’

Robert Hooke was born on the Isle of Wight in 1635 and was taught by his father John. After John’s death in 1648, Robert, expressing an interest in painting, moved to London and studied with Peter Lely, before gaining a place at Christ Church Oxford in 1653, where he became Robert Boyle’s assistant and counted Christopher Wren among his friends. He went on to become in 1663 one of the early members of the new Royal Society (founded by Charles II in 1660), and was from 1662 its first Curator of Experiments. Although works of biological microscopy had been published before, Hooke’s Micrographia was the most detailed and an impressive feat of engraving and book production. The order of the President of the Royal Society, which gave permission for Micrographia to be printed, is reproduced on the leaf facing the title and bears the date 23 November 1664. The book was evidently complete early in 1665, as we see from Samuel Pepys’ diary. The book began by pointing to the microscopic irregularities in those man-made things which, to the naked eye, appear to be perfection itself, like the tip of a needle or the blade of a razor. Hooke called them “rude mis-shapen things” and noted that “…when view’d with a Microscope, there is little else observable, but their deformity.” This contrasted with the products of nature, perfectly formed and suited to their purpose. The book exemplified the Royal Society’s motto, which appeared on its title page – nullius in verba (take nobody’s word for it) – in that everything it said was based on Hooke’s own observation. It remains an impressive book, still sought by collectors. The plates show just how impressive Hooke’s work must have been in 1665 and, even to our modern eyes, the detail of the engravings remains striking. Each image is based on a drawing by Hooke himself, a skilled draughtsman who has been called “England’s Leonardo.”

Inscription in Hooke’s hand recording the gift of this book (Perrault: Memoirs for a natural history of animals, London 1688) from “his worthy friend the authour” (the translator Alexander Pitfeild, also a fellow of the Royal Society) on 18 January 1687/8 (Keynes.Q.6.4)

The Library is lucky to possess two copies of the first edition of Micrographia, both of which appear in the exhibition. The first probably arrived soon after 1887, the year of the sale of the library of Freeman Roper, whose bookplate is pasted inside. It also bears the much earlier inscription (dated 1691) of one John Sharp, who may be responsible for the early annotations. The second copy came to us in 1982 with the 8000-volume library of the book-collector and surgeon Sir Geoffrey Keynes (1887–1982) – brother of the economist Maynard Keynes – who probably acquired it in 1947 from the sale of the Earl of Lonsdale’s possessions (it bears the Lonsdale book-label). Keynes collected the works of a number of scientific men, including the naturalist John Ray, the physician William Harvey and Hooke himself. Hooke himself had what was, for the late seventeenth century, a fairly substantial private library. Though it was dispersed at auction eight weeks after his death on 3 March 1703, we are lucky that the sale catalogue survives. It tells us that the library contained over 3000 volumes, probably representing more individual titles, of which around half were in Latin and 1000 in English. There was at least one incunable (Albumasar’s Introductio in Astronomiam, Venice, 1489) and he may have had two copies of Copernicus’ De revolutionibus of 1543, in addition to the first edition of Newton’s Principia mathematica (1687), which was of course published during Hooke’s lifetime. From surviving books once in Hooke’s possession it is evident that he took his collecting very seriously, taking care to inscribe his name or initials inside many volumes (as we see with the copy of Lister’s Historiæ animalium Angliæ), along with information on where he purchased them and for how much. Some of Hooke’s diaries survive, and they too detail many of his purchases of books and his reading habits. The Library possesses at least three volumes from Hooke’s library, all included in the exhibition; one arrived in 1961 (Daniello Bartoli’s Del ghiaccio e della coagulatione: Rome, 1681) and two (Pitfeild and Lister) came with the collection of Sir Geoffrey Keynes in 1982.

The exhibitions runs until Saturday 7 February in the Entrance Hall display cases, which are accessible to all visitors to the Library. The display will be visible during normal Library opening hours (9.00-7.00 Monday-Friday and 9.00-5.00 Saturday). Please contact the curator, Liam Sims (ls457@cam.ac.uk), for further information. 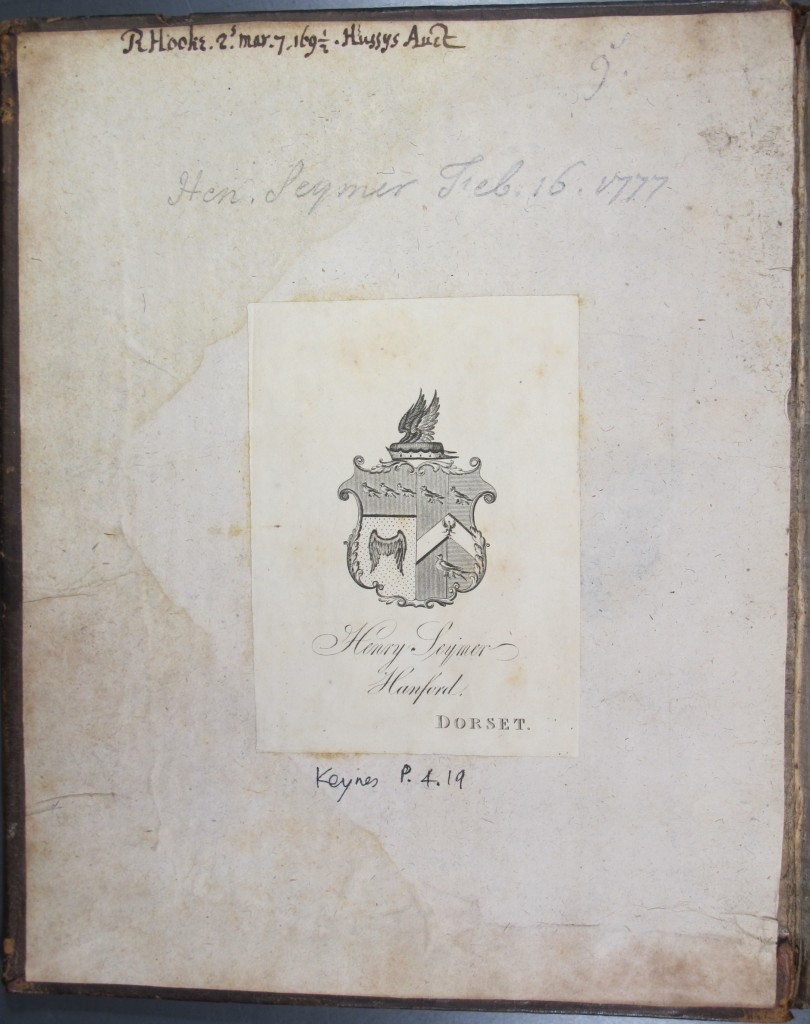 Hooke’s ownership inscription to the top of the front pastedown in Martin Lister’s Historiæ animalium Angliæ (London: John Martyn, 1678), noting that he bought it for 2 shillings on 7 March 1691/2 at the auction of Christopher Hussey’s books (Keynes.P.4.19)