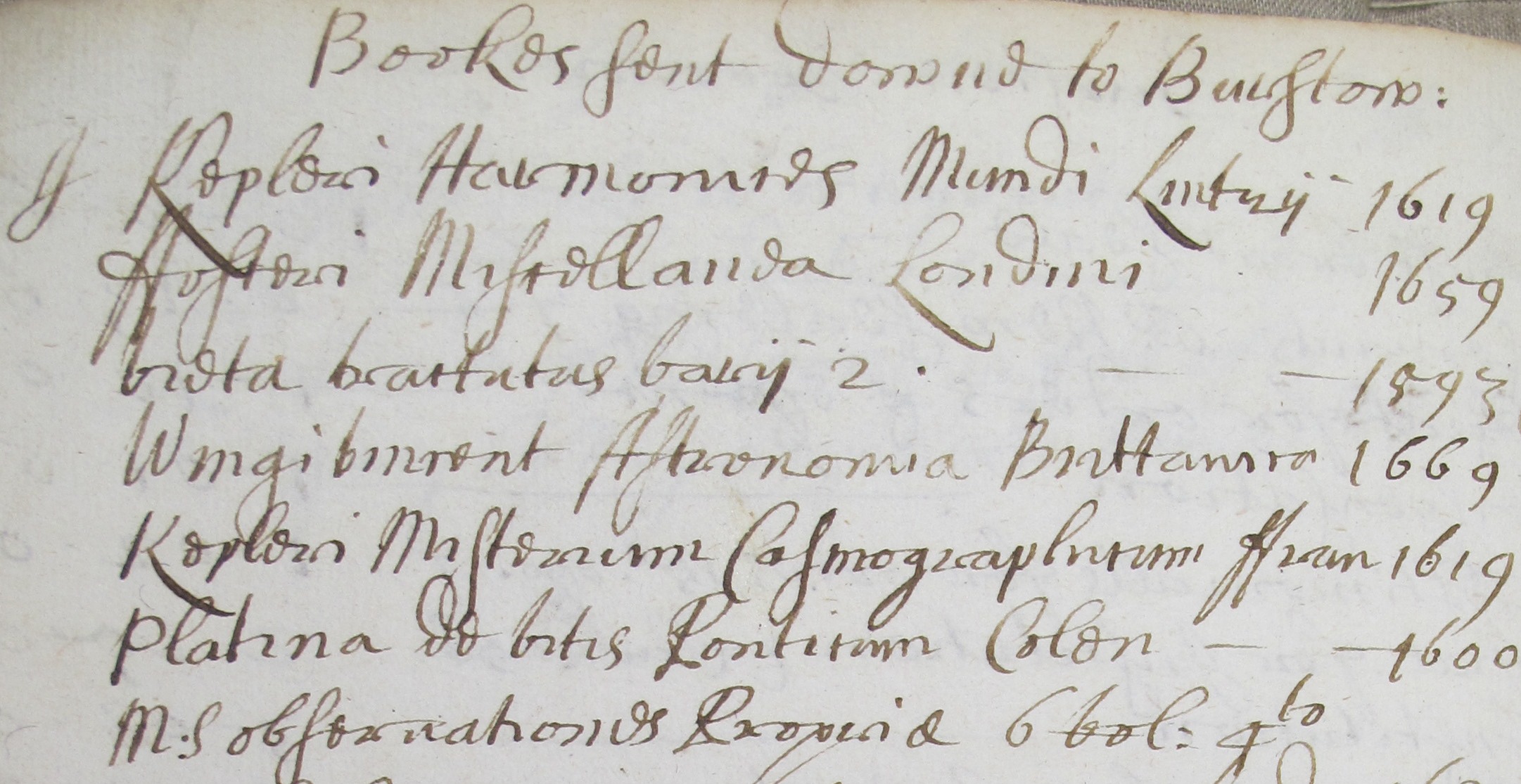 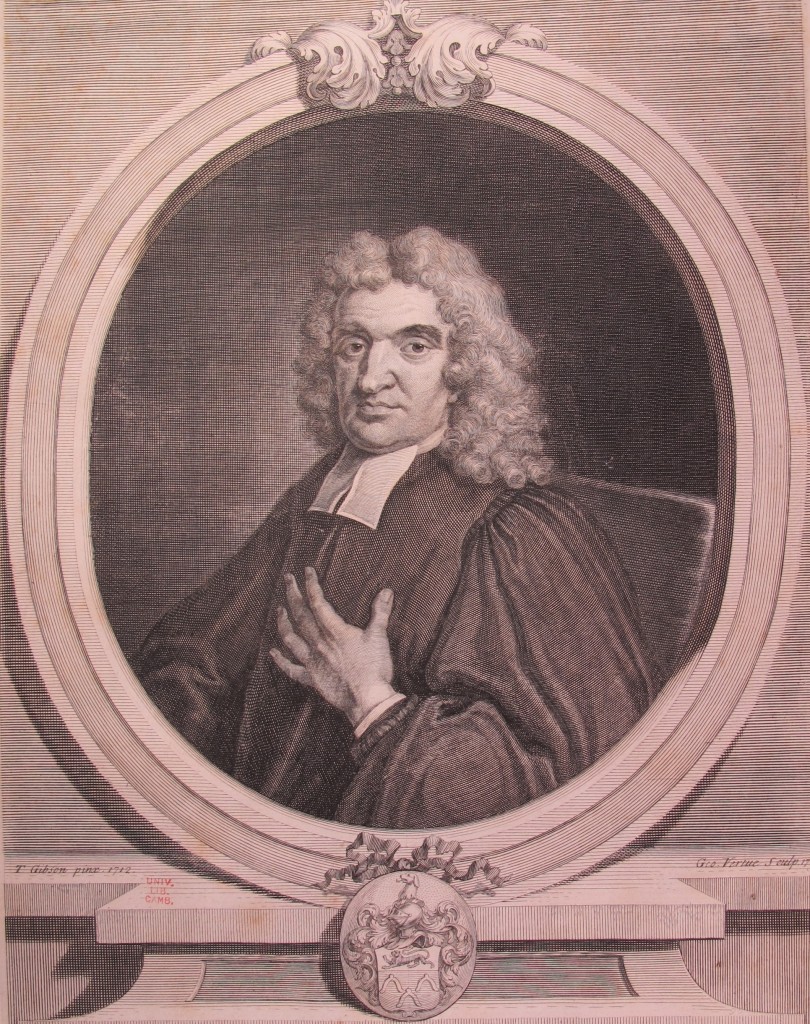 On this day in 1719 died John Flamsteed, the first Astronomer Royal, a position he held for 42 years from 1675 until his death. Quite by chance, I recently discovered a volume which appears to have been part of Flamsteed’s own library – John Graunt’s Natural and political observations mentioned in a following index: and made upon the bills of mortality (London, 1676) – and this anniversary seems like a good opportunity to consider the collection of books he amassed throughout his long and distinguished career. Flamsteed was born in Denby and educated at nearby Derby, but a rheumatic illness prevented him from attending university upon leaving school in 1662 at the age of fifteen. However, his illness allowed him much time for reading and he soon took an interest in astronomy, and in 1669 the Royal Society printed – in their Philosophical Transactions – his observations on eclipses. In December 1670 he was admitted to Jesus College Cambridge as a pensioner and took his MA in 1674. He corresponded with the Italian astronomer Cassini, and was on friendly terms with Jonas Moore (instrumental in the foundation of the Royal Observatory at Greenwich) from the 1670s. In 1675 he was appointed the first ‘astronomical observator’ (the title of ‘Astronomer Royal’ was not commonly in use until later) and was instructed “forthwith to apply himselfe with the most exact care and diligence, to the rectifieing the Tables of the motions of the Heavens, and the places of the fixed stars, so as to find out the so much desired Longitude of places for the perfecteing the Art of Navigation.” Flamsteed preferred to use the title ‘Mathematicus Regius’, as we see from the ‘M. R.’ after his name on the title page of Graunt’s book in the University Library (see below).

Detail from within Flamsteed’s list of “Bookes in my owne Library in the closet” made in January 1677 (in RGO 1/43). Note the first entry, for Hooke’s ‘Micrography’ of 1665, one of the most significant works of seventeenth-century science

Three lists of books belonging to Flamsteed survive within in his notebooks, now part of the Royal Greenwich Observatory Archive on deposit at the University Library, and give us the only contemporary information about his collection. The earliest (now RGO 1/43) is headed “Bookes in my owne Library in the closet” and is dated January 1677; it contains about 140 entries. In March 1684 another list, of around 155 titles, was compiled (now RGO 1/42), and in the following year a further list – headed “Bookes sent down to Burstow” – of just over 50 titles was made (now RGO 1/44).

If the 155 titles listed in 1684 represent Flamsteed’s entire collection at that date, we must conclude that his library was fairly small, though there may be other (now lost) lists or catalogues and the collection could have grown considerably over the next few decades. Comparable collections (in subject and date) include John Ray’s library, sold in 1708 (ESTC T21611), which contained around 1350 books and Robert Hooke’s, sold in 1703, which contained about 3000 (ESTC T21590 and T64508). Flamsteed’s collection contained some very early books, including the 1512 Paris edition of Rolewinck’s Fasciculus temporum (a history of the world), the 1528 Basel edition of Erasmus’ commentary on Psalm 85 and the 1538 edition (also Paris) of Nichomachus’ Introductio arithmetica. The last work is included in the list of “bookes sent down to Burstow” in 1685, soon after Flamsteed became rector of Burstow in Surrey. 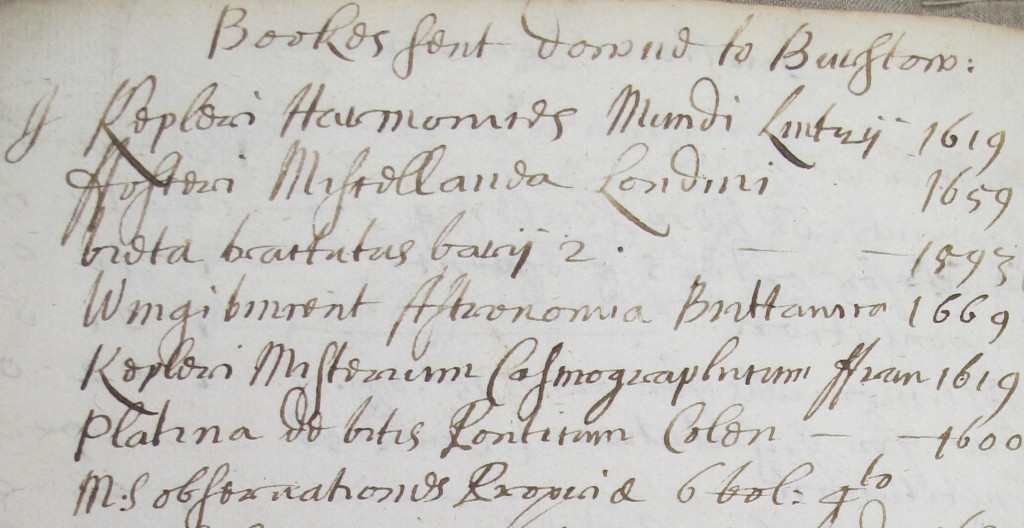 In addition to works of history, philosophy, grammar and religion we find – naturally – works of science. Hooke’s famous Micrographia of 1665 – the subject of an exhibition in the University Library Entrance Hall cases in January 2015 – appears in the 1677 list and is valued at (or cost) 12 shillings, Tycho Brahe’s Astronomiae instauratae mechanica (Nuremberg, 1602), Isaac Barrow’s translation of Euclid’s Elements (London, 1660), valued at 4s 6d, and the second edition (Basel, 1566) of Copernicus’ great De revolutionibus orbium coelestium. 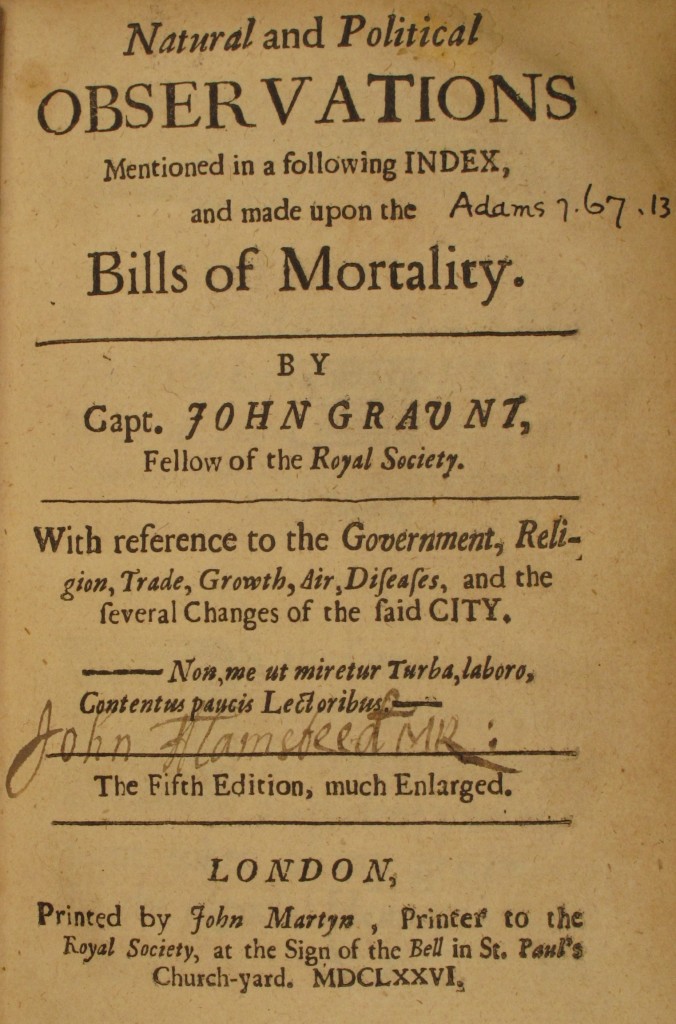 Not in any of these lists, but evidently once in Flamsteed’s possession, is one of the Library’s seven copies of the fifth edition of John Graunt’s Natural and political observations mentioned in a following index: and made upon the bills of mortality (London, 1676), which included the first estimation of London’s population and is recognised as the beginning of demography. Its absence from the three lists would suggest it was acquired after 1685. At Flamsteed’s death in 1719 his books passed to his joint executors (his wife, and his niece, Ann Hodgson), and later to Hodgson’s husband, the mathematician James Hodgson, a friend of Flamsteed who taught at Christ’s Hospital and died in 1755. The book is inscribed “John Denne 1756”, which would suggest that some or all of the books were dispersed after Hodgson’s death the previous year; the price inscribed above Denne’s name (2s 6d) might support this. Denne is possibly the fellow of Corpus Christi College Cambridge (born 1693; died 1767) who served as perpetual curate of St Bene’t’s Church and later Archdeacon of Rochester. In the nineteenth century the volume – possibly by now released back onto the second-hand book market in Cambridge – was acquired by the Cambridge mathematician and astronomer John Couch Adams (1819-1892), who studied at St John’s College, became a fellow of Pembroke and was Lowndean Professor of Geometry and Astronomy from 1859 until his death. Adams, whose library of early printed books came to the University Library after his death, seems to have been a humble man, refusing a knighthood during Queen Victoria’s 1847 visit to Cambridge and, in 1881, turning down the opportunity to follow in Flamsteed’s footsteps as Astronomer Royal.

The manner of the dispersal of Flamsteed’s books, probably in the 1750s after James Hodgson’s death, was unfortunate for posterity. The libraries of Robert Hooke and John Ray were similarly dispersed after their deaths, but by auction, which – from surviving copies of the sale catalogues – allows us to see the state of the collections at the end of their lives. The possibly piecemeal, and certainly unrecorded dispersal of Flamsteed’s books means we can rely only on these early lists – the latest made some 34 years before Flamsteed’s death – and surviving books once in his possession now recorded in library catalogues, to gain a fuller understanding of his library as it stood towards the end of his life. A quick search online reveals the following books once in his possession or with inscriptions by him:

Two works he presented to the library of Jesus College: his own Doctrine of the sphere (London, 1680) and Kepler’s Tabulae Rudolphinae (Ulm, 1627)

A copy of the second edition of Isaac Barrow’s translation of Euclid’s Elements (London, 1686), now at Columbia University and inscribed by Flamsteed to Edward Paget, a fellow of Trinity for whom Flamsteed secured the position of mathematical master at Christ’s Hospital in 1682.

The first edition of Newton’s Principia mathematica (London, 1687); the presentation copy from Newton to Flamsteed, now at the Museum of London.

There must, however, be more of Flamsteed’s books, sitting undisturbed on library shelves the world over, and I would be interested to hear from libraries with such books in their collections. 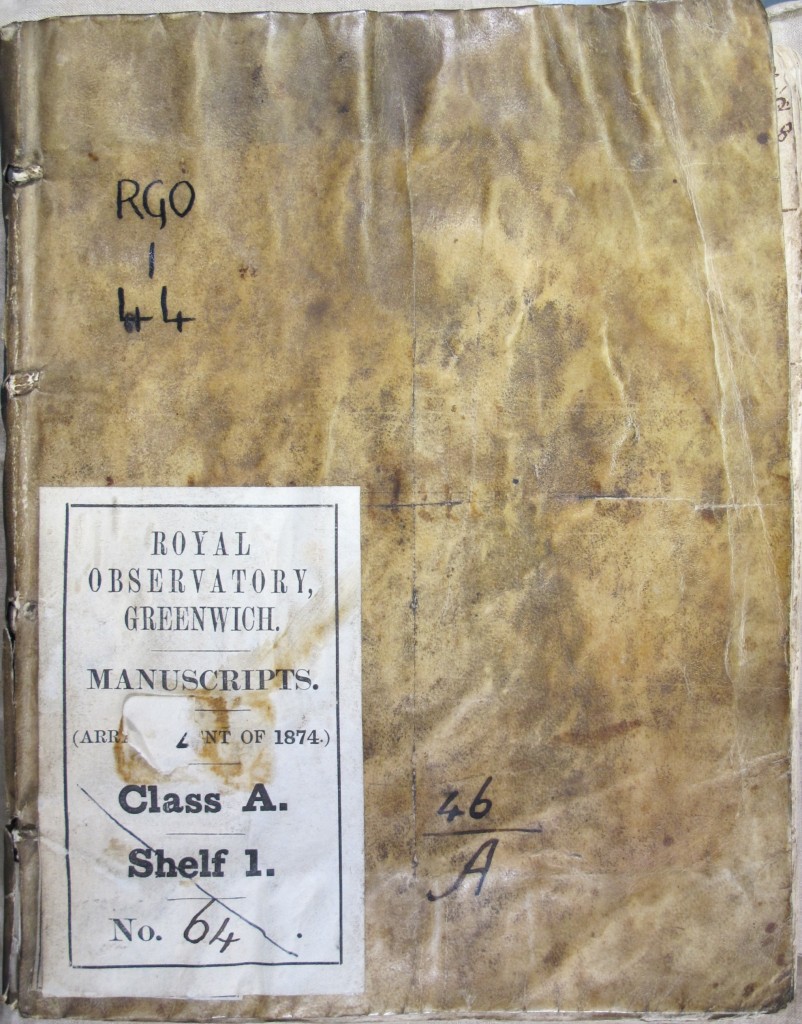 The seventeenth-century limp vellum binding of RGO 1/44, one of Flamsteed’s notebooks, which contains the list of “Bookes sent downe to Burstow” made in 1685