Comings and Goings: The Movement of Manuscripts at the University Library before 1600

Posted on 1 August 2017 by James Freeman

A new subject guide has been published on the University Library website on the subject of the handwritten and printed registers, inventories and catalogues of the Library’s collection of manuscripts in the years before 1600.  A previous blog post considered the origins and character of some of these records; this will take a closer look at what opportunities they present to trace the changing contents of the collection as well as the provenance of manuscripts that are here to this day.

There are many complexities involved in consulting the early catalogues of the University Library: books are often described with terse brevity; texts might be misattributed; there is rarely a clear distinction between handwritten and printed books; and where there is, the record is not always accurate. 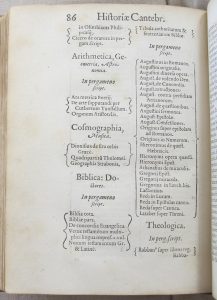 The list of ‘veteres libri in Cantebrigiensi Bibliotheca’ included in John Caius’s Historia Cantebrigiensis Academiae (1574), while notable as perhaps the first published list of books in an institutional library, illustrates some of these problems.  It separates printed books from those ‘in pergameno scripta’ – but three of the books listed are actually “in charto scripta”: MSS Ee.6.35, Kk.4.4 and Kk.6.29.  We find printed books among the manuscripts: the ‘Vetus testamentum multiplici lingua impres. 2. vol.’ is in fact the Complutensian polyglot Bible, published 1514-17 and given to the University Library by Cuthbert Tunstall (1474-1559), shortly before he became bishop of Durham in 1530 (now Rare Books, Sel.2.69-74).  We also find manuscripts among the printed books: the ‘Zottus Graecè scriptus’ is MS Ee.6.35, a volume of works by John Tzetzes, also given by Tunstall. 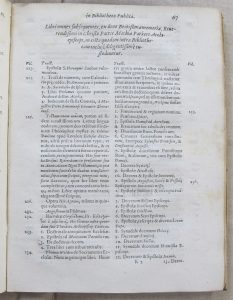 One also cannot trust some of the attributions made by the early catalogues.  In the same year that Caius’s list of books was published, another was issued that listed printed books and manuscripts given by Matthew Parker (1504-1575), archbishop of Canterbury.  As part of the rearrangement of the Library around that (more on this below), space was made for these new accessions: a locked cupboard was provided to house this precious bequest.  Comparison of the list of manuscripts given by Parker in 1574 and the catalogue of 1583 shows that other valuable manuscripts – such as Codex Bezae (MS Nn.2.41) – had, in the intervening nine years, made their way into this same cupboard.  Unfortunately, when he came to compile the Ecloga Oxonio-Cantabrigiensis in 1600, Thomas James (1572/73-1629) did not recognise this fact, and assumed that other of the cupboard’s contents had once been Parker’s.  The list of manuscripts given by Parker that he provides in the Ecloga is not, therefore, reliable: one came from Theodore Beza (no. 224; now lost), one from Nicholas Bacon (no. 256; MS Ff.1.23), one from James Pilkington that was formerly in the possession of his brother Leonard Pilkington (no. 240; MS Gg.3.28), and three others in all likelihood by the actions of Andrew Perne (nos 223, 226-30, 231; MSS Dd.7.1-2, Dd.7.7-11, Dd.7.4).  Caveat lector!

Fortunately, these early records have now all been edited and many of these problems addressed: the Corpus of British Medieval Library Catalogues, for instance, provides bibliographical information for the texts, providing the name of the author and the title according to modern standards, and identifies the manuscript where it is known to survive.  With complete transcriptions of each entry, recourse to the original documents – some of which are now extremely fragile – is rarely necessary. 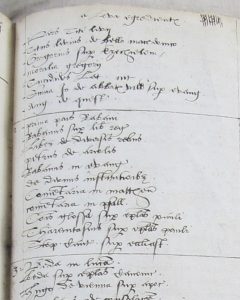 This corpus of records has immense scholarly value in ‘microbibliographical’ as well as ‘macrobibliographical’ terms, for addressing questions concerning the provenance and movements of individual books, or the fluctuating fortunes and changing complexion of the University Library as a whole during the turbulent times prompted by the Reformation and England’s shifting confessional identity.  The catalogues can help one to pinpoint the earliest date at which a specific manuscript was known to have been part of the University Library: for instance, a late twelfth-century glossed copy of the Epistles of St Paul (MS Kk.2.18), which had previously belonged to the Augustinian priory at Maxstoke in Warwickshire, arrived no later than 1573, when it is listed in the first catalogue drawn up by Matthew Stokys.  Where the manuscript was during the thirty-five years or so between the dispersal of the priory library and the compilation of the catalogue remains, as with the fate of so many books immediately after the dissolution of the monasteries, as yet unknown. 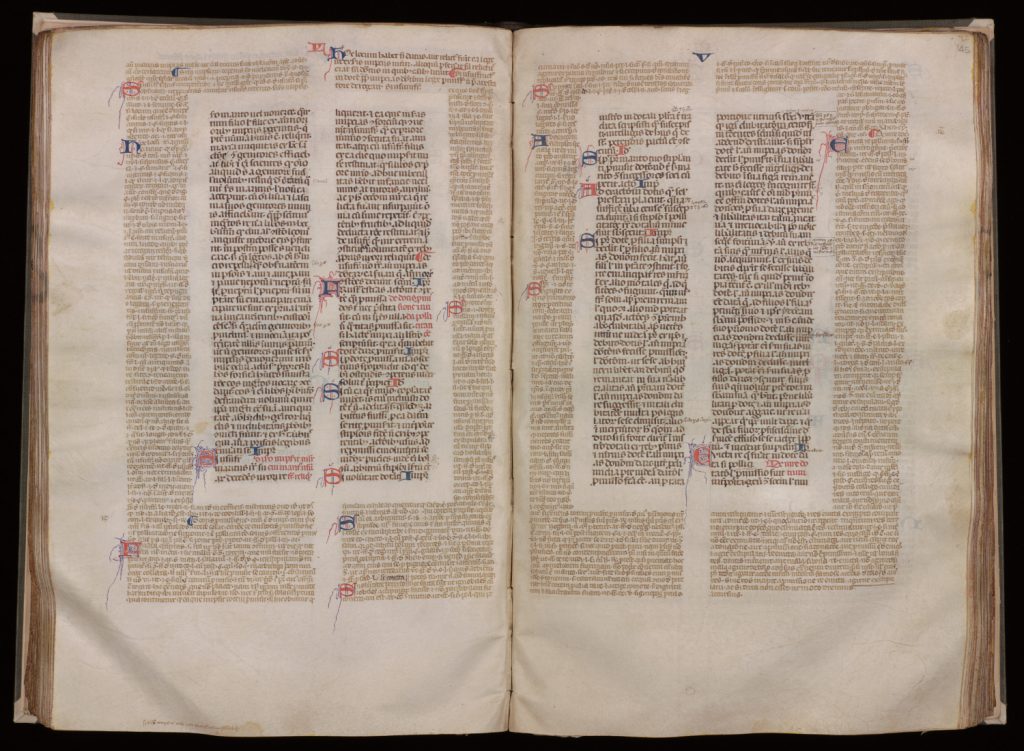 We can also trace the movements of a manuscript through the successive rearrangements of the Library.  On such questions, books surviving from the University Library’s collections in the fifteenth and sixteenth centuries are almost always completely silent; we are dependent on these contemporary records for any reconstruction.  Readers familiar with our 600th anniversary exhibition, Lines of Thought, will know that the earliest reference to a library dates to 1416: specifically, the will of William Loring, which specified that his books of civil law were to remain ‘in comuni libraria scolarium universitatis Cantebriggiensis imperpetuum’: in the common library of scholars of the university of Cambridge in perpetuity.  The only manuscript known to survive from Loring’s gift is Dd.7.17, a copy of Justinian’s Codex with the ordinary gloss of Accursius.  Oddly, Dd.7.17 is not listed in the catalogue of c. 1424-c. 1440 – but nor are any other books of civil law.  Perhaps the books were held elsewhere at the time this catalogue was made; alternatively, a list of civil law books may never have been made, or is perhaps now lost.

Loring’s book duly appears in the catalogue of 1473.  The earliest room constructed specifically to house the Library comprised the upper storey of the western range of what is now the Old Schools (the building that runs north-south in the centre of the quadrangle) – the so-called ‘New Library’.  By 1473, however, further space had been provided in the form of a building along the south range, running parallel to King’s College Chapel: the ‘libraria communis’ or ‘libraria magna’ again occupied the upper storey.  Dd.7.17 was to be found in the first lectern along the south side of the library room.

By the mid-sixteenth century, the books had moved once again, to a room above the eastern range of the Schools quadrangle (demolished in 1754).  In a medieval forerunner of ‘matched funding’, the ground floor was built at the University’s expense, while the upper storey was paid for by Thomas Rotherham (1423-1500), archbishop of York, who also donated a number of manuscripts to the Library.  In the 1556-57 inventory prepared for the visitation of the Marian commissioners, Dd.7.17 was now to be found in the second stall on the right hand side of the room, which was entered from the southern end.  There it remained for the next sixteen or so years, since the 1573 catalogue records it in the same position. 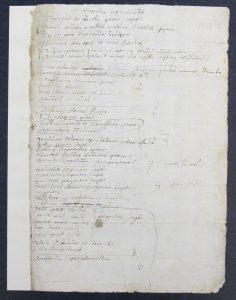 By 1574, the Library had been rearranged again.  The compilers of the catalogue of that year listed the stalls in the reverse order to previously, starting at the far, northern end of the room and walking towards the door at the southern end.  Dd.7.17 is now to be found on the sixth stall on the right as one exits the room – in other words, the fifth on the left as you enter, there being ten stalls in total sitting perpendicular to the western wall.  The manuscript has therefore been moved across the room and further towards the back.  Having previously been alongside MS Ii.4.28 and Dd.7.19, it is now surrounded by other books of civil law, such as MSS Dd.7.21, Dd.1.12, Dd.8.10 and Dd.7.13.  By 1583, its position had changed again; ‘library moves’, which occasionally bedevil browsers of the present-day stacks, have a long genealogy!  The first piece of library furniture on the left was now a locked cupboard that contained all of the manuscripts and some of the printed books given by Matthew Parker in 1574; there then followed the usual stalls, with Dd.7.17 the ninth book on the far side of the second stall from the door.  It had therefore stayed on the western side of the room, but moved slightly closer to the door, along with one manuscript (Dd.1.12) and two printed books (Inc. 1707 and Inc. 2238) with which it had previously shared a shelf in 1574.

Such movements are of particular interest for considering the ways in which the contents of the Library were arranged, with which other books a manuscript might have been grouped at a particular time, and, at the simplest level, determining the earliest date at which a manuscript was known to be part of the collections.  The structure of the catalogues also makes it possible to reconstruct – as J.C.T. Oates has done – the working methodology of their compilers: in which order they examined the shelves, or the degree of attention that different individuals gave to whether the contents were manuscript or printed.  Such minutiae are only rarely recoverable, so the University Library – and book historians generally – are fortunate in having a set of records that speak so vividly of the pasts of many of the books that still rest on our shelves.

This is the second in a series of blog posts about the early catalogues of the University Library.  The other two are available at the following links.

1. ‘The Early Catalogues of the University Library: A New Subject Guide’

3. ‘The Fluctuating Fortunes of the University Library during the 15th and 16th Centuries’