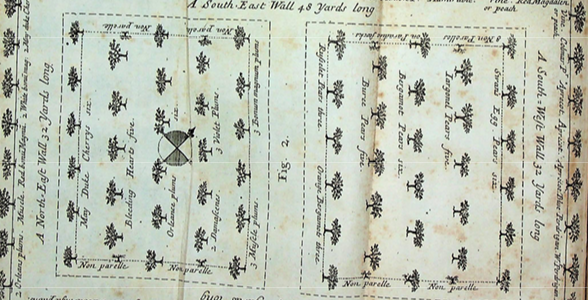 Researchers and authors will use a variety of resources and consult items across the University Library collections and beyond. Although library and archive staff may know a little about the project underway, we usually do not have the full picture and so are delighted when we learn more. In the following guest blog post Jonathan Spain explores the range of resources he used in writing his recent book on the history of fruit farming in the Cam valley.

Mercifully, I completed the writing of a history of fruit farming in the Cam valley just before the first Lockdown in March, 2020 and the introduction of restrictions on access to the University Library (UL). I spent the subsequent period editing, indexing and putting together the bibliography, prior to publication in July, 2021. Collating the references for the bibliography highlighted just how important the sources provided by the UL, in particular from Special Collections, were for the creation of the book.

For the first part, which considers the origins and commercial development of the fruits grown in the Cam valley, the Rare Books collection of early horticultural books and catalogues, dating from the 17th century, was essential. This includes both French and English authorities, many of which appear to have been donated from private collections curated by college alumni. John Evelyn’s translations of the French authors, Bonnefons and La Quintinye, John Rea’s Flora (1665) and John Laurence’s early 18th century gardening books (The Clergyman’s Recreation, The Gentleman’s Recreation and A New System of Agriculture, published between 1714-26), proved particularly useful. The papers of William Palmer, an antiquarian collection held by the Department of Manuscripts, provided transcribed evidence from manorial records, deeds and wills of orchard holdings in South Cambridgeshire villages, dating from the late middle ages/early modern period.

For part two, which includes a detailed topographical survey of orchards and fruit farms, the collection of county maps and sales particulars held by the Map Department, was especially useful. The value of sales particulars for research purposes was described in a previous blog A Fruitful Resource.

For the third part of the book, which considers the wider economic history, sources from Official Publications provided the basis for a detailed analysis. This includes horticultural statistics, annual acreage returns, numerous MAFF reports and publications on the fruit industry, National Food Survey annual reports (with fruit consumption statistics), and a complete set of the journal, Fruit Intelligence, produced by the Commonwealth Economics Unit, on the UK and global fruit trade, with details of fruit imports.

The book could not have been written without access to the journals and proceedings of numerous horticultural bodies including the Royal Horticultural Society and the Horticultural Research Association, as well as gardening and horticultural magazines, dating from the 19th century, in particular The Gardeners Magazine and The Gardeners Chronicle, and trade journals accessed from the Periodicals Department. Of particular note is a complete run of The Fruit Grower, the leading organ of the fruit industry, covering the 20th century. Late in the day, I also discovered the deposited collection of the Chivers Magazine (1938, 1945-62), the company’s annual publication, which was of particular use for the post-war history of the business.

And so, a big thank you to the staff of the University Library for providing access to all the sources, without which the book would not have been possible. (See jonathanspain.wordpress.com for a more detailed book summary).